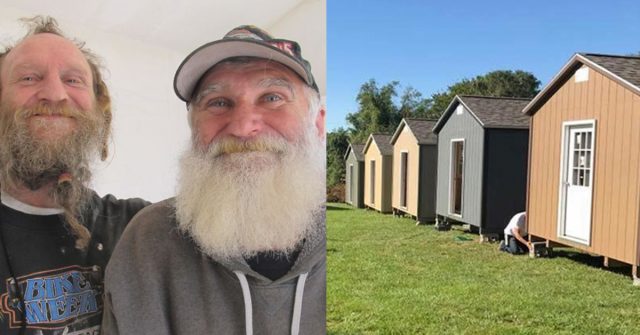 The Veterans Community Project in Kansas City has taken some beautiful steps of compassion to improve the lives of homeless veterans. Generous donations from community members helped to make possible the construction of the Veterans Village; a collection of small houses that homeless veterans can live in for free.

The houses were designed similar to personal studios; to be space efficient and to also include everything a person could need. Measuring 12 feet by 20 feet, the housing designs have allowed for more space and for more houses to be placed on an unused plot of land in Kansas City. While they originally planned to build 30 of these wonderfully kind houses, they were able to fit and create 50. The village’s community atmosphere will help veterans feel less isolated.

The formerly homeless veterans live there for free and are provided with food and daily necessities, as well as a much earned and much needed sense of privacy, security, and stability in their lives. The group has planned for nearby classes to be held in a local community center which will help the veterans adjust to having a home and also to help them cope with their previous traumas from war.

Homelessness, and suicide, are both two very tragic and difficult things that happen in large percentages to American veterans. Many stereotypes exist concerning the reasons for why people become homeless, some being that they are lazy, don’t want to work, or are not valid members of society. Yet the compassionate who have experience working with the homeless and with homeless veterans have seen a different story: They have seen lovable human beings who were once young men and women signing up to serve their country. They have heard the awful war stories these young Americans faced, and the nightmares they live day after day as Post Traumatic Stress Disorder(PTSD) constantly haunts them and their feelings, sometimes causing panic attacks and disproportionate reactions when doing something as simple as sitting at a bus stop.

They have listened with love, as these brave young men and women tell of the neglect, judgment, criticism that society has given them after they’ve returned, emotionally and often physically wounded from war. When people start to truly understand the difficult lives and experiences that the homeless have had, their hearts begin to have a natural response of love and of wanting to help them.

A post shared by Understanding Compassion (@understanding_compassion) on Mar 14, 2018 at 10:42pm PDT

The Veteran’s Community Project is made up of what they describe as, “veterans helping veterans”, and has been involved in many projects which seek to end homelessness and neglect in veteran communities. Their idea of building tiny economical homes for the homeless has been very well received so far.

Aside from the wonderful benefits of having a new home, a food pantry is available, and free bus passes are given to every veteran in the area, homeless or not.

Marine veteran Kevin Jamison who is the Project Operations Officer of the VCP, left a law firm he worked for to devote his time to the Veterans Village project. He even put up his own house as a collateral to cover the loan needed for the Veterans Outreach Center.

He expressed the VCP’s desire to help veterans which is the group’s main goal. “We couldn’t sit still. We wanted to start helping veterans. It’s that simple,” he said.

Other nonprofit agencies in the area have reached out to the VCP in order to set up partnerships with them and to help them succeed.

If you see or encounter a homeless person this week, take a minute to remember that this person is someone’s brother, someone’s son, someone’s daughter or someone’s sister. Remember that they’ve likely had a very difficult life, one probably harder than we can understand, and that they deserve just as much love as any other person on Earth. Try and share something with them; whether it’s food, water, or even just a smile and an acknowledgment that they are loved. Your kindness can change the world.