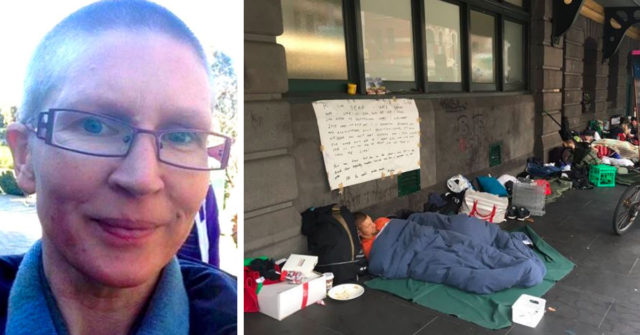 When a once homeless woman witnessed the growing number of homeless families in Melbourne, she decided to personally make a difference.

Jessica Pearce was staying at a hotel during during the Christmas holiday and was shocked at how many people she saw suffering on the streets.

“I guess we felt shocked and I suppose a bit guilty – we didn’t realize how bad the housing situation in Melbourne was… The streets were lined with people sleeping on mattresses or on the ground,” Jessica said.

Jessica and her husband decided that night to walk around the streets and to talk to some of the homeless people to get a feel for their situation. They met several of Melbourne’s homeless, were able to learn about their circumstances, and after give them $20 and $50 bills in the spirit of Christmas.

Jessica said that one man’s story in particular really moved her;

“He had a two and a three-year-old who were staying with his ex-partner and he wasn’t going to have access to them because he didn’t have somewhere to live.”

After hearing his story, Jessica and her husband brought them man back to their hotel, and bought him a nice room for two nights.

“I guess it just touched me and I thought that maybe there was something that we could do,” Jessica said.


Then after the two nights in an even greater act of love and charity, they decided to pay the hotel to keep the room for the poor man for an entire month.

“I wanted him to have stable accommodation for the children.”

The deep love in Jessica’s heart still wanted to do more, for she realized that not only was this man suffering from not being able to afford a home, but two amazing children were going to have to be potentially fatherless also. Jessica had just recently finished paying off her own mortgage, and was interested in buying investment properties in Melbourne.

She found that if she looked into cheaper communities, she could buy 4 houses for the same price as what she had originally set out to pay for a large rental. She then decided and purchased 4 homes and said that these properties will provide housing to struggling people.

Jessica is planning to offer both short term and long term housing plans, based on the needs of each individual, and she is working with government organizations to help find ways to keep these houses afloat.

Jessica’s history gives her a deep insight into the life of being homeless. When she was 15 years old, her parents kicked her out of the house, and she was only able to find a place to live thanks to a kind math teacher of hers. Her experience with this kind teacher is a large part of what motivated her to offer housing to the homeless today.

“He was connected with a house in Elwood that provided accommodation for young people who wanted to stay in school, which is probably a lot of the reason that I had the idea of providing a house like that myself now.”

Jessica is now sharing the love and kindness she once received multiplied by four, and who knows what inspiring acts of kindness the beautiful souls she is now helping will one day do themselves.

Golden Retriever In Australia Surprises Owner With A Baby Koala Whose Life She Just...

Homeless 14-Yr-Old Created A Charity To Give Shoes To People In Need After Being...