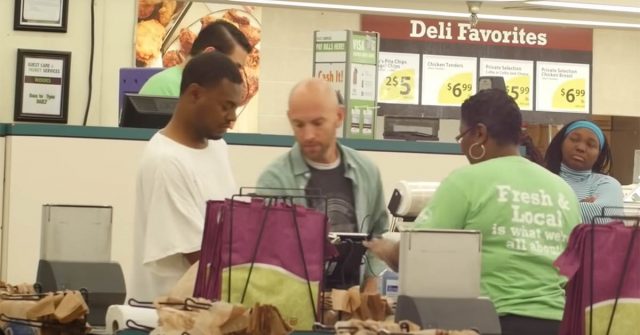 Two kindhearted men spent their day waiting in grocery lines and paying for the groceries of strangers in front of them.

Mike Lewis called a friend he’s known since high school, Rob Westerman, and asked him if he’d like to join him in paying for strangers groceries at a local grocery store in Cincinnati, Ohio.

“My buddy called and asked if I’d like to go help him pay for people’s groceries,” Rob shared in a post online.

Rob is a pastor and Mike is a minister, and the two budgeted several hundred dollars to help strangers and headed to a local grocery store. They wanted to help those they encountered, and they also wanted to inspire others to be kind, so Mike took a video of some of the people Rob handed grocery money to.

Rob waited in line behind customers in the grocery store, and once the cashier told them their total, he walked up and handed them enough cash to cover their total, and then walked away before they could thank him.

“Our goal was to go out and show average people that God loves us,” Rob said. “Let’s truly love our neighbor, whatever that looks like for you. We did this with no strings attached.”

The customers were deeply moved, reflecting on Rob’s kindness with smiles, tears, and some even paid for the next customer in line behind them.

Rob shared how he had been struggling emotionally the week that they went to the grocery store, and that while helping others he learned that a lot of people, not just him, have also been struggling.

“When Mike did the video, I was a mess myself,” Rob said. “It made me realize that as people, we all have junk in our lives and we don’t know what other people are going through.”

But he learned that even while struggling, we can still be kind to others.

“This is something you can do, I can do, anyone can go and do this,” Mike said.

“Our goal is that people see this video and go out and be nice to people,” Rob said. “Let someone over in traffic, or smile at someone. Just do good.”

Watch This Heartwarming Video Of Strangers Getting Their Groceries Paid For:

Millions of gentle hearts online have appreciated and been inspired by Rob and Mike’s kindness for strangers.

“I remembered when I was a kid I dreamed of feeding the world. This man in living my dream,” commented Lillian L.

“That lady who started crying just broke my heart. There are SO many people struggling,” wrote Avery C.

“I love how he pays and goes. He doesn’t stop and make a big deal out of it and embarrass them. Just WOW,” commented Cass.

“I’ll do it for the next person” she says… the way she instantly said it with no hesitation warms my heart beyond belief and makes me want to hug every kind person I see,” wrote Steven W.

Kind Man Grows And Gives Away Fresh Food From His Garden To People In...

Yelling At Children Can Lead Them To Depression And Anxiety, Psychologists Warn