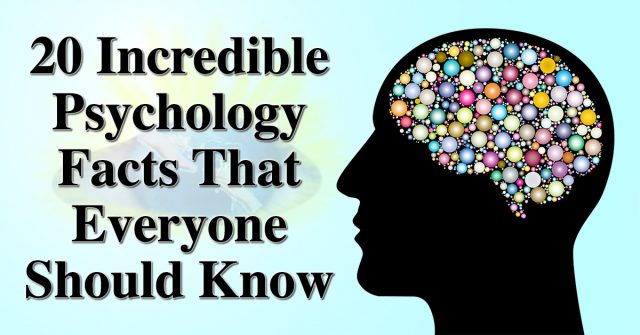 Psychology is one of the most fascinating and important subjects that we have the privilege to learn about in our lives. Understanding how our minds, feelings and bodies work is essential to having happiness and inner peace in life.

Psychology is the science of behavior and mind, including conscious and unconscious phenomena, as well as thought. It is an academic discipline of immense scope and diverse interests that, when taken together, seek an understanding of the emergent properties of brains, and the variety of things they manifest. As a social science it aims to understand individuals and groups by establishing general principles and researching specific cases.

Below is a list of 20 incredible psychological facts that everyone should know:

1. A 20 second hug releases neurotransmitters that help you trust the one you’re hugging.

Oxytocin is released in the body when a person feels love, secure, safe and connected to their loved ones.

Through the release of this chemical, the brain knows that everything is safe and that there is no need to worry. (source)

What’s even better is that you don’t have to wait for a hug to receive the benefits of Oxytocin. Simply focus on the feeling of love in your heart, and allow that feeling to move to your entire body, and your mind and body will release oxytocin through your conscious decision to feel love. This is the healing practice of self-compassion.

2. The more you spend on others, the happier you are.

According to various studies, when we give resources to others, we receive the reward of happiness.

“We’ve shown in our research that giving money to others actually does make people happier,” says Norton, an associate professor of marketing at Harvard Business School. “One of the reasons is that it creates social connections. If you have a nice car and a big house on an island by yourself, you’re not going to be happy because we need people to be happy. But by giving to another person, you’re…creating a connection and a conversation with that person, and those things are really good for happiness.”(source)

3. When you remember a past event, you’re actually remembering the last time you remembered it.

When remembering a memory, our brains also remember the last time that we remembered that memory.

Research conducted by Northwestern Medicine and published in the Journal of Neuroscience shows that recalling a memory more often makes that memory less accurate, and that every time you take a memory off the shelf in your brain, it gets put back just a tiny bit different each time.

This is why our memories and emotional connections to them change over time. (source)

4. The brain is more creative when it’s tired.

If you’re trying to do creative work, you’ll actually have more luck when you’re more tired and your brain isn’t functioning as efficiently.

When you’re tired, the brain is not as good at filtering out distractions and focusing on a particular task. It’s also a lot less efficient at remembering connections between ideas or concepts. These are both good things when it comes to creative work, since this kind of work requires us to make new connections, be open to new ideas, and think in new ways. So in many cases, a tired, fuzzy brain is of much more use to us when working on creative projects. (source)

5. The brain feels rejection as pain.

We all know that rejection hurts, but neuroscience has concluded that it does in fact get processed similar to the way pain does.

While the brain does not process emotional pain and physical pain identically, the reaction and cascading events are very similar, and the same natural chemical is released during both events. (source)

6. Multitasking is not what’s happening in the brain.

New research shows that we humans aren’t as good as we think we are at doing several things at once. But it also highlights a human skill that gave us an evolutionary edge.

Researchers reported that, “You’re not paying attention to one or two things simultaneously, but switching between them very rapidly.”(source)

7. Your decisions are more rational when thought in another language.

A university of Chicago study showed that Korean citizens who thought in foreign languages reduced their overall bias, a wonderful result. (source)

8. Relationships can be more important to your health than exercise and eating well.

University of North Carolina at Chapel Hill researchers found that the size and quality of a person’s social ties affect specific health measures, such as abdominal obesity and hypertension, at different points in their lives. (source)

9. No blind person has ever developed schizophrenia.

This was quite an interesting find.

Across all past papers, there has not been even one reported case of a congenitally blind person who developed schizophrenia. (source)

10. Your favorite song is likely associated with an emotional event.

The feelings are just as important as the words. (source)

12. Chocolate discharges the same chemical in your body as when you feel love.

When we eat chocolate, several neurotransmitters are released in the brain that have a positive and comforting effect on human feelings.

One of the main neurotransmitters released is phenylethlyamine, which causes alertness, excitement, quickens the pulse rate and generates feelings of happiness.

Chocolate can arouse feelings similar to those that occur when someone is in love. (source)

13. Spending money on experiences instead of material things also makes you happier.

“We buy things to make us happy, and we succeed. But only for a while. New things are exciting to us at first, but then we adapt to them,” says Dr. Thomas Gilovich, a psychology professor at Cornell University who has been studying the question of money and happiness for over two decades.

So rather than buying the latest iPhone or a new BMW, Gilovich suggests you’ll get more happiness spending money on experiences like going to art exhibits, doing outdoor activities, learning a new skill, or traveling. (source)

14. The average high school kid today has the same level of anxiety as the average psychiatric patient in the early 1950’s.

Around 49% of people have at some point suffered from anxiety, depression, or some sort of substance abuse.

Yep, it wasn’t just you, you’re not alone. Psychologists have speculated about the possible reasons for this increase in both anxiety and depression over the last fifty years. Some of the reasons may be a decrease in “social connectedness”—we tend to move more, change jobs, participate less in civic organizations, and we are less likely to participate in religious communities. People are far less likely to get married, more likely to delay getting married, and more likely to live alone. All of these factors can contribute to worry, uncertainty, anxiety and depression. (source)

“The American Psychiatric Publishing Textbook of Mood Disorders” shows that people who engage in meditation and prayer religiously are less stressed out. (source)

For the average American, $75k a year buys happiness. It liberates you from poverty and gets you what you need in life. So the reality is that being elevated out of poverty does in fact create happiness. Let’s strive to elevate the entire human race out of poverty. (source)

17. Being with happy people makes you happier.

For instance, in relation to one happy person:

So do your best to fill your inner circle with those who are generally happy, and you will become happier as well.

Family, education, work, each on it’s own can be stressful and together it adds up, especially for the millennial generation. There have been recent criticisms of millennials because they support taking care of those who suffer, of helping the poor, of supporting social programs, of doing good to their neighbors, for acting with love. Yet all of these are wonderful things that should be applauded and encouraged by the older generations, especially those who believe in the spiritual teachings of Jesus, Buddha and Mohammad.

They are the most stressed age group on Earth, so make sure you give as much love as you can to the millennials in your life.(source)

19. Convincing yourself you slept well tricks your brain into thinking it did.

The mind is a powerful thing, and our thoughts and beliefs create our feelings and the resulting health effects in our bodies. Believing you’ve slept well even when you didn’t causes your brain to register a good night’s sleep. They called it “placebo sleep”. (source)

20. Kindness is best learned through experience, rather than being taught to do it.

The neuroscience and social science research is clear: kindness changes the brain by the experience of kindness. Children and adolescents do not learn kindness by only thinking about it and talking about it. Kindness best learned by feeling it so that they can reproduce it. Kindness is an emotion that students feel and empathy is a strength that they share. (source)

See Also: 8 Easy Ways To Stay Calm In An Argument According to Psychology