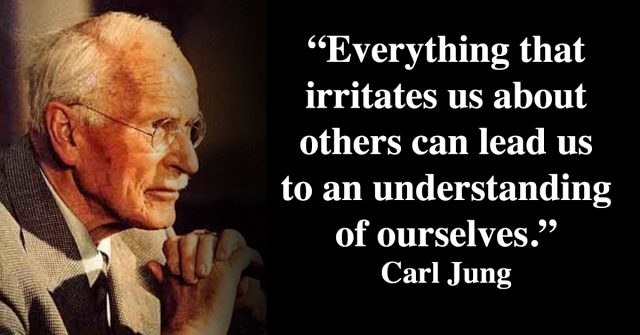 One of the best things about Carl Jung was the fact that he was a deep philosophical thinker who examined all aspects of the self when writing about the human experience. As you will see in the quotes below, Jung was clear on the notion that we are spiritual beings, and that having a spiritual relationship with oneself truly helps us to understand the deeper aspects of who we are.


For some, these ideas translate into religion; the practice of learning from other great spiritual teachers through reading, listening to follower’s interpretations during sermons, and following a set of rules while finding solace in the existence of something greater than yourself. But the problem with these forms of spirituality is that they often do not require an individual to take an in-depth look within themselves and their hearts; at their own psychology and getting to know the core of who they are (and also who they are not).

According to www.cgjungpage.org: “Carl Jung was one of the creators of modern depth psychology, which seeks to facilitate a conversation with the unconscious energies which move through each of us. He contributed many ideas which continue to inform contemporary life: complex, archetype, persona, shadow, anima and animus, personality typology, dream interpretation, individuation, and many other ideas. He had a deep appreciation of our creative life and considered spirituality a central part of the human journey.”

In reading the quotes in this article, an even deeper appreciation for Jung and his work can be gained, as we uncover conscious themes that were apparent throughout his wonderful teachings. He was clearly a person who thought deeply on life, who took his own practice of meditation seriously and developed a beautiful and intimate knowledge of his inner being.

Here are 20 quotes from Carl Jung to inspire you and to provide much to reflect on.


1. “One does not become enlightened by imagining figures of light but by making the darkness conscious.”

2. “Don’t hold on to someone who’s leaving, otherwise you won’t meet the one who’s coming.”

3. “Until you make the unconscious conscious, it will direct your life and you will call it fate.”

4. “Everything that irritates us about others can lead us to an understanding of ourselves.”

5. “The meeting of two personalities is like the contact of two chemical substances: if there is any reaction, both are transformed.”

7. “Knowing your own darkness is the best method for dealing with the darknesses of other people.”

8. “If you are a gifted person, it doesn’t mean that you gained something. It means you have something to give back.”

9. “Mistakes are, after all, the foundations of truth, and if a man does not know what a thing is, it is at least an increase in knowledge if he knows what it is not.”

10. “Your visions will become clear only when you can look into your own heart. Who looks outside, dreams; who looks inside, awakes.”


11. “People will do anything, no matter how absurd, to avoid facing their own souls.”

12. “Loneliness does not come from having no people around, but from being unable to communicate the things that seem important to oneself, or from holding certain views which others find inadmissible.”

13. “Depression is like a woman in black. If she turns up, don’t shoo her away. Invite her in, offer her a seat, treat her like a guest and listen to what she wants to say.”

14. “A man who has not passed through the inferno of his passions has never overcome them.”

15. “Your perception will become clear only when you can look into your soul.”

18. “A dream is a small hidden door in the deepest and most intimate sanctum of the soul, which opens up to that primeval cosmic night that was the soul, long before there was the conscious ego.”

19. “We may think that we fully control ourselves. However, a friend can easily reveal something about us that we have absolutely no idea about.”

20. “Everything about other people that doesn’t satisfy us helps us to better understand ourselves.”

For Over 25 Years, Each Week This 82-Year-Old Gives Out Haircuts To The Homeless...