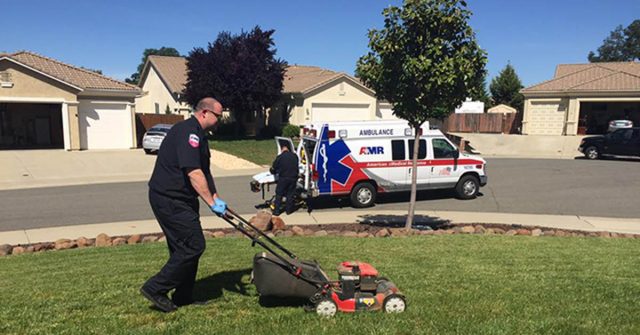 When Ken Densley’s father, a man born in 1929, fainted while mowing his front yard, one of the kind ambulance EMT’s picked up where he left off and mowed the rest of his yard.

The neighbors saw Ken’s father passed out by the mower and called 911, and help arrived quickly.

“My dad, born in 1929, won’t let us mow his lawn. He pushed too hard today and passed out. The neighbors saw and called 911,” Ken explained in a post online.

“Dad’s had problems feeling faint in the past.”

When the ambulance arrived, Mr. Densley was hooked up to an EKG, and while he had overexerted himself a bit, he was fine.

“I live close by — about five minutes away — and when I got there, the ambulance was there and my dad was hooked up to an EKG and they were monitoring his vitals,” Ken said. “They also encouraged him to go to the hospital, but he refused further treatment.”

Ken’s father likes to do things himself and was confident that he did not need any medical treatment. While they were taking his dad back inside to lay down and rest, Ken said that “Suddenly, I heard the lawnmower.”

“He’s okay and refused to go to the hospital. My sister and I came as soon as we heard and while we were taking him back inside one of the EMTs put the gurney away and the other finished mowing the lawn!”

“I told him I would do that but he insisted!” Ken explained in the post.

Ken was deeply grateful that the EMT had responded so quickly and helped his father, and he really didn’t want him to feel like he had to do anything else, but the kind man simply smiled and continued mowing.

“I went out and said, ‘You don’t have to do this,’ but he said, ‘I checked with dispatch and we don’t have any pressing calls.’”

“He basically suggested I’d have to do something like punch him to get him to stop,” Ken laughed. “Then he asked where to put the lawnmower when he was done.”

The kind EMT mowed the entire rest of the yard and then returned the lawnmower to Mr. Densley’s garage.

“He finished and even put the mower away!” Ken explained.

The EMT, Chris Spires, did not want any recognition but simply said he just wanted to do something nice.

Ken posted an update on his dad, who is doing great, and has agreed to let his family help mow the lawn from now on.

“Update on dad: We did get him to go to the hospital on Saturday. They kept him overnight and ran a lot of tests. Thanks for all the prayers and well wishes! He was discharged last night and we just got back from a follow up visit with his doctor and he’s doing great.”

“He has also promised to let us mow the lawn from now on! Also, for those who made the suggestion, he already has a great riding lawn mower, but got this one last year so he could get more exercise!”

Thousands of hearts were warmed by Chris the EMT’s act of kindness:

“So good that their are still wonderful people around!!!!!!!” commented Bob N.

“My grandma is the same age, born in ’29, doesn’t like to ask for help. I have to trick her into letting me do the work for her. If I tell her I’m coming over Friday to take care of her yard and horse barn, she will do most of the work on Thursday. I show up on Wednesdays now to beat her to the punch. Lol. I love my grandma Betty so much, it makes me happy to do anything I can to help her.” wrote Brenda W.

“My grandfather was just like that. Strong like an Oak Tree. I lost him to Cancer at age 99. He helped everyone he could throughout all his life. Even during his last days he could walk, dance and be part of the party where ever I took him! Cherish them and allow them to be independent as long as they can. Thank you for sharing the story of the EMT. He is a real gentleman and a good man.” shared Janizabeth O.

“What a wonderful story God bless that EMT for showing such kindness..Praying for your dad…” said Joyce H.

“There are some awesome people out there and I thank God for them. Lord bless these men and women who go about being your hands, heart and feet.” commented Sandra M.

The kindness of Chris the EMT shows us how beautiful his heart of service really is. Not only does he spend each of his days responding to and helping care for those who are injured, but he even went out of his way to finish mowing the lawn of a older gentleman after making sure he was safe.

See Also: Kind Teens Picked Up An Elderly Man Who Fell, And Then Walked Him Back Home

A post shared by Understanding Compassion (@understanding_compassion) on Mar 5, 2020 at 4:13am PST

Kind Man Gave A Free Ride Home From The E.R. To An Elderly Lady...