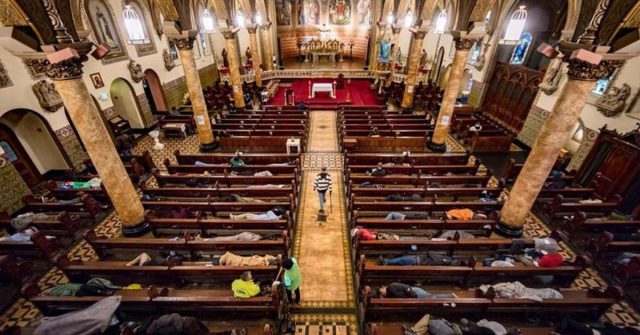 “Truly I tell you, whatever you did for one of the least of these brothers and sisters of mine, you did for me.”
~Jesus Christ.

Churches have begun opening their doors; allowing our beloved homeless to come in, rest, and to be at peace.

For those who spend their days starving and digging through trashcans, who have been discarded and looked down on by society, and who are rarely are able to get more than three hours of sleep each night, this compassionate decision comes as a true blessing which provides physical, emotional and mental healing.

The wonderful organization responsible for this idea, The Gubbio Project, partners with local churches and together, from 6am to 1pm, they turn the rear two-thirds of pews in churches into beds for the homeless. The front section continues to be used for daily mass at 12:15pm; the layout being created with a deep and beautiful purpose in mind.

“This sends a powerful message to our unhoused neighbors – they are in essence part of the community, not to be kicked out when those with homes come in to worship. It also sends a message to those attending mass: the community includes the tired, the poor, those with mental health issues and those who are wet, cold and dirty,” explains the Gubbio Project.

Lack of sleep is a major problem for our homeless, with constant sleep deprivation being linked to an increase in mental illness.

“Most of the people you see here are walking all night, trying to stay out of sight of the police or other people who will harass [them],” explained one church member.

The churches also provide blankets, clothing vouchers, access to the bathrooms and even free haircuts.

“An average of 225 unhoused neighbors seek safety and rest on the pews in the sanctuary of St. Boniface church each weekday starting at 6am, and for an additional 100 guests at St. John’s the Evangelist in the Mission. No questions are asked when our guests walk into the churches; in an effort to remove all barriers to entry, there are no sign-in sheets or intake forms. No one is ever turned away; all are welcomed, respected and treated with dignity.”

The Gubbio Project‘s website explains how they support the mission of having neighbors view each other, not as enemies, but as friends.

“In our world full of strangers, estranged from their own past, culture and country, from their neighbors, friends and family, from their deepest self and their God, we witness a painful search for a hospitable place where life can be lived without fear and where community can be found. Although many, we might even say most, strangers in this world become easily the victim of a fearful hostility, it is possible for men and women and obligatory for [Gubbio] to offer an open and hospitable space where strangers can cast off their strangeness and become our fellow human beings.”

“The movement from hostility to hospitality is hard and full of difficulties. Our society seems to be increasingly full of fearful, defensive, aggressive people anxiously clinging to their property and inclined to look at their surrounding world with suspicion, always expecting an enemy to suddenly appear, intrude and do harm. But still—that is our vocation: to convert the hostis into a hospes, the enemy into a guest and to create the free and fearless space where brotherhood and sisterhood can be formed and fully experienced.”

Numerous churches have been inspired by the Gubbio Project to compassionately allow the homeless in to be loved and cared for.

The St. Boniface Church led the way with the Gubbio Project to begin taking care of the homeless by allowing them to sleep in their pews.

The Beth Emmanuel Church in Ontario, Canada, began opening its doors to the homeless during the freezingly cold winter months by transforming one of their rooms into a ‘warming center’ where rough sleepers can come to stay warm and can get a good night’s rest.

Churches in New Jersey partnered with the organization Family Promise and are now providing temporary shelter to homeless families.

In Niagara Falls, Angela Peebles started a 2-year pilot program with the St. Andrew’s Church which is allowing the homeless in as well, helping to “establish a new drop-in space where they [our homeless] can hang out, get warm or cool down in the summer, and access services they may need.”

At a time when we have more than 700,000 homeless people in North America, it’s so deeply beautiful to see churches following the compassionate teachings of Jesus and housing and providing shelter for the poor.

Much of what Jesus taught, and what churches teach, is to love one another through action. In Luke 10 of the bible, Jesus’ compassionate teaching of the good samaritan, which took place during a time when Jews and Samaritans did not get along, beautifully illustrates this:

“Behold, a certain lawyer stood up and tested him, saying, “Teacher, what shall I do to inherit eternal life?”
He said to him, “What is written in the law? How do you read it?”
He answered, “You shall love the Lord your God with all your heart, with all your soul, with all your strength, and with all your mind; and your neighbor as yourself.”
He said to him, “You have answered correctly. Do this, and you will live.”
But he, desiring to justify himself, asked Jesus, “Who is my neighbor?”
Jesus answered, “A certain man was going down from Jerusalem to Jericho, and he fell among robbers, who both stripped him and beat him, and departed, leaving him half dead. By chance a certain priest was going down that way. When he saw him, he passed by on the other side. In the same way a Levite also, when he came to the place, and saw him, passed by on the other side. But a certain Samaritan, as he travelled, came where he was. When he saw him, he was moved with compassion, came to him, and bound up his wounds, pouring on oil and wine. He set him on his own animal, and brought him to an inn, and took care of him. On the next day, when he departed, he took out two denarii, gave them to the host, and said to him, ‘Take care of him. Whatever you spend beyond that, I will repay you when I return.’ Now which of these three do you think seemed to be a neighbor to him who fell among the robbers?”
He said, “The one who showed him mercy.”
Then Jesus said to him, “Go and do likewise.”

Watch the following video showing churches and the Gubbio Project helping the homeless:

A post shared by Understanding Compassion (@understanding_compassion) on Mar 5, 2020 at 4:13am PST

A Hug A Day Will Chase The Stress Away