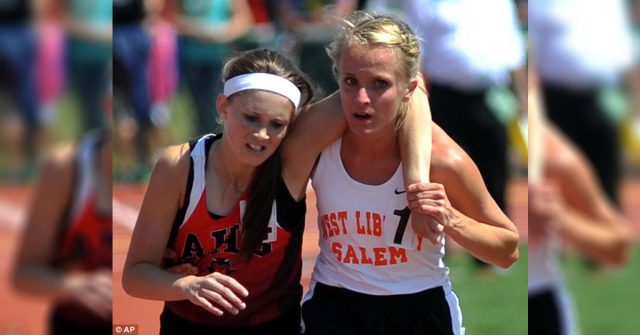 The actions of a high school runner received national attention as her story was shared; not for winning a medal or for a feat of athleticism, but for an extraordinary act of kindness as she helped an injured and struggling competitor finish their race.

17-year-old Meghan Vogel was in last place in the 3,200-meter run as she caught up to Arlington High School sophomore Arden McMath, whose body was giving out.
(Video Below)

Instead of passing her opponent as the finish line was in sight, Meghan put the runner’s arm around her shoulders, half-supporting and half-carrying her about 30 meters to the finish line.

As they reached the finish line, Meghan made sure to let her struggling opponent Arden cross before her.

The people who watched this beautiful act of kindness were left in awe, and one spectator shared a video of the race, which quickly went viral online.

The world was inspired by her beautiful act of sportsmanship and love. 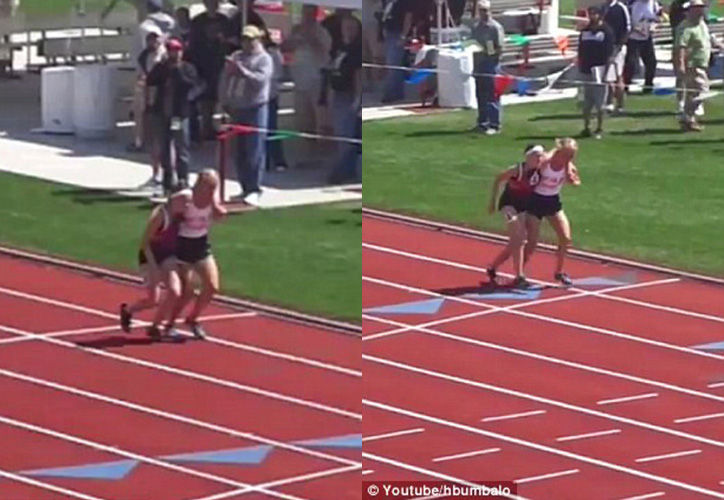 “It’s an honor and very humbling,” Meghan said after receiving thousands of positive messages. “I just thought I was doing the right thing, and I think others would have done the same.”

But the runner, Arden, who was carried by Meghan said that she’s not so sure;

“I really don’t think just everyone would have done that,” Arden said. “I just couldn’t believe what she did – especially pushing me in front of her – and I’m so grateful.” 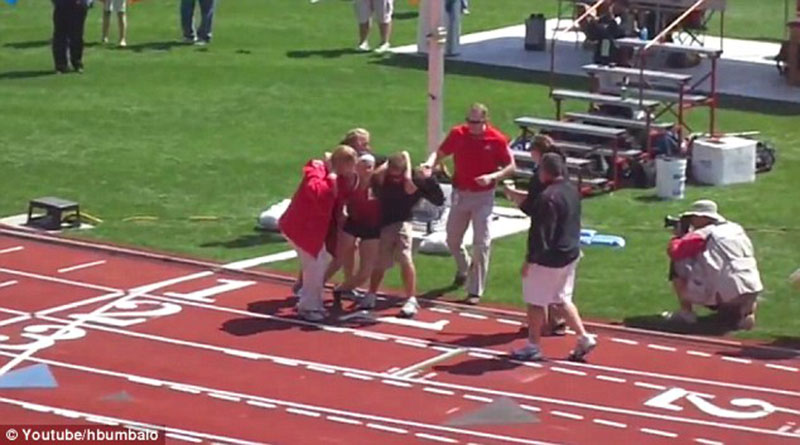 Both girls were a little hazy about the details as both were physically exhausted after running.

“The last thing I remember was seeing Arden fall and then trying to get her to the finish line,” Meghan said.

Arden on the other hand, remembered feeling like she was “blacking in and out” and falling a few times before Meghan helped her.

Meghan, who had won the 1,600-meter race earlier, said she was emotional and tired from that when she began the longer 3200-meter race.

She also felt “a little woozy” after the 3200, and both runners found themselves next to each other in the training room, where the Arlington student was being treated. Arden said her sodium levels were low, but she was able to recover.

The race’s rules said that both runners should have been disqualified, but the official decided not to make that call.

Meghan’s mother, Ann Vogel, said she’s very proud of her daughter, and that the response has been amazing. “People were coming up to us in tears and hugging both of us after the race,” she said.

While competition in its many forms can be entertaining, it’s important to remember what matters most: showing love and kindness to one another.

If you notice someone in your life who could use a hand, even if they’re not in your family or on your same team, consider helping them the way Meghan did for Arden, and let your loving kindness help to make the world a more beautiful place.

Kind Woman Held One Of Struggling Mother’s Twins Who Was Told She Couldn’t Hold...

5 Zodiac Signs That Have The Strongest Sense Of Intuition