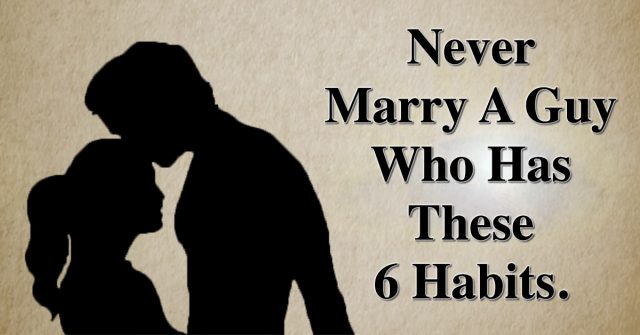 Who we choose to marry is often one of the greatest and most important decisions we make in life. As bestselling author H. Jackson Brown Jr. once wrote, “Choose your life’s mate carefully. From this one decision will come 90% of all your happiness or misery.”

Marrying a guy who is the complete opposite of your imaginary Mr. Right would be a mistake: someone who thinks you are not worthy of wonderful things, does not like to be seen with you and thinks of you as nothing more than his wife. Rather than happily ever after, it sounds more like a bad dream.

Here is a list of 6 habits that tend to result in unhappy marriages.

Healthy relationships are ones where two people can openly share and discuss their ideas and feelings. If someone is consistently unable to listen to your side of the story, always has to be right, and cannot apologize when they make mistakes, it might be quite difficult for the two of you to enjoy life together. This does not mean that they need to agree with everything you say, but listening, acceptance, and open-mindedness are key for allowing two people to genuinely express themselves together.

A little mistake now and again or a sometimes forgetful mind can be easily forgiven, and even a big promise, if broken once in a blue moon, can be forgiven as well, but if a partner consistently breaks promises, then it’s likely they are not ready to handle a real relationship. If you find your partner often easily making many promises, and only a day later breaking them, perhaps they are not as serious as you are about your relationship.

Integrity, trust and keeping one’s word is very important in a healthy relationship, and if a partner hasn’t yet developed this, it’s best to wait on marriage until they learn how, or until you meet someone who can.

3. A Consistent Lack Of Interest In The Relationship

If you feel like you’re always giving your all to your relationship, and are unappreciated, ignored, taken for granted or even criticized as ‘not good enough’ often, then perhaps your partner is not as interested in you as you are in them. While a relationship is give and take, and we all have times where we need to take more than we can give, under normal circumstances these phases should not last for prolonged periods of time. Appreciation and gratitude are part of loving one another, and if a partner hasn’t yet learned these skills, then chances are they aren’t ready for marriage.

If it takes days or weeks to returns messages or calls, and basic commitments seem just too difficult for them to keep, it’s time to either have a real talk with them or to move on to someone who values you and your time.

Another common, corrosive habit many people have is frequently criticizing their partner. Being a constant critic is a sure way to stress an intimate bond to the breaking point, and cannot create a lasting healthy relationship. Criticism can be undone and healthy habits can be learned to replace it, such as developing a routine to express compliments, approval and to mention positive aspects of your partner; which tend to neutralize the toxic effects of criticism. If criticism dominates your relationship, it’s best to hold off on marriage until the two of you can support each other verbally.

A post shared by Understanding Compassion (@understanding_compassion) on May 18, 2018 at 6:15am PDT

5. Is Never The First To Show Or Communicate Affection

The tendency to believe that you need to be approached first, told ‘I love you’ first, or do receive something nice first by your partner in displays of affection is more prevalent in women, as shown by research on who is more likely to initiate a relationship, but it is also prevalent in some men. While sometimes used during the dating process, after entering a relationship it should be replaced with a willingness to care for your loved one, as sometimes it can continue even after your relationship is well-established. Not only can this habit keep you from fulfilling your own needs, but it can send the wrong signals and messages to your partner; that you’re just not that into them.

Lifetime relationships are about love, and about showing love, so it’s necessary for someone to be able to show their love in order to have a lasting and satisfying marriage. It’s very possible for two people to learn and grow in this area, but the interest on both sides has to be there.

Violence is never okay in any relationship, be it physical or emotional, and if a partner is abusive it’s always best to separate. If someone is emotionally abusive in a relationship, it is nearly impossible to be happy, as verbal attacks and manipulation can wear and tear down a positive and healthy self-image over time, leading to depression. While not everyone intends to be emotionally abusive, it’s important for both of you to have the understanding that if you really love each other, then you’ll spend the time necessary to read books and even to take classes on ways to practice healthy communication in a loving relationship.

If a partner is physically abusive, this is not a person you should marry. Many victims of domestic violence within relationships came from abusive childhood homes, and tend to justify the actions of the abuser as okay, as ‘it’s not so bad’ or they try to pretend that it never happened. Most of the time, people who are physically violent do not have limits when it comes to abusing another, especially when intoxicated, and it can be life-threatening. Many free lifelines offer support, shelters, and plans on how to stay safe and how to plan an escape route. You deserve a happy life.

See Also: The Link Between Verbal Abuse And Anxiety That No One Talks About.