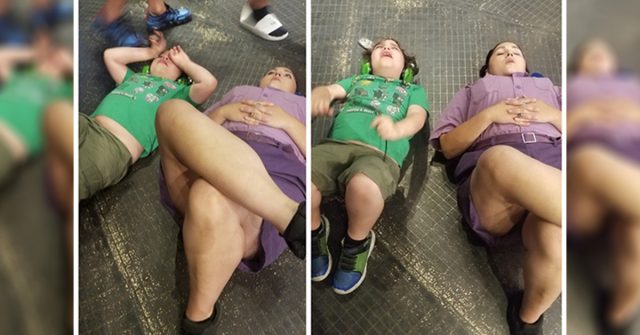 When a theme park ride had to close unexpectedly, a child with autism who had been very excited for the ride began to have a break down. It was during this time that a kind employee, who noticed and understood the situation, came to his rescue in a beautiful act of kindness.

The boy’s mother, Lenore Koppelman, was so grateful that she shared the following:

“I would like to share something incredibly special with you all. A day we will never forget. Today we took our little boy Ralph to Universal Orlando Resort for the first time. Ralph is awesomely autistic, and we are proud to be a neurodiverse family. As wonderful, loving, intelligent and incredible as Ralph is, sometimes he struggles. (Don’t we all?) When he struggles the hardest, he can have something known as an “autistic meltdown”. Some people who are not educated about autism might see it as a temper tantrum. But the fact of the matter is that it is not the act of a spoiled and naughty child. It’s a cry for help. This is Ralph’s way of saying “I don’t know how to monitor and regulate my emotions right now. I need help, please! I’m scared! I’m overwhelmed! I want to feel better and I don’t know how!”. And here came Jen to the rescue.”

“First I should explain that Ralph was EXTREMELY excited to ride the Spiderman ride at Islands of Adventure. He kept on asking us if the ride was coming up soon, and we would reassure him and say “Soon, Baby. Soon. First there are other rides before that one. That one is at the end. It’s the last island. So we have to ride the other ones first. Okay?” He was SO patient for SO long. As patient as he possibly could be. He would say “Okay” and sigh, and then enjoy the next ride. But all the while, the excitement was building up to the pinnacle of his day: The Spiderman ride near the exit of Islands of Adventure.”

“So when we finally got there and handed them his handicap-access tickets which would make his waiting time a little bit more bearable (he would still have to wait the same amount of time, just not in a physical line), he was upset that we had to walk away from Spiderman in order to find a nice cool air conditioned place in which we could wait until it was our turn to ride. He was as patient as could be while we sat there as a family for the 15 minutes it would take until we could go back and walk in. The anticipation was driving him wild! But he did his very best to regulate it with the tools he has been given over the years by his teachers and therapy team at his special needs school back home. They, and he, are all AMAZING.”

“When we finally got back to Spiderman, he was leaping for joy. He thought “OH WOW! This is IT! FINALLY!” and you should have seen the SMILE on his face. It was incredible. Then when it was almost our turn to board, and he could see the end in sight, the vehicles right in front of us, we got the news that the ride had broken down. Everyone was very nicely asked to exit. And Ralph, understandably, lost it. (Wouldn’t you?). My husband and I know the signs. We could see it coming, like an oncoming train. And yet we couldn’t dodge out of the way. There was nowhere else to go. The autistic meltdown was GOING to HAPPEN. And happen it DID.”

“Ralph collapsed onto the floor while crowds of people were attempting to exit the ride and the gift shop attached to it. He began sobbing, screaming, rocking, hyperventilating, and truly struggling to breathe. A woman who worked there named Jen came over… no… no, she RUSHED over… and while I frantically kept trying to get him to stand up so he wouldn’t get trampled on by people, she encouraged me to leave him on the floor if that is where he needed to be. Then she did this. She got down on the floor WITH HIM. She rested next to him while he cried his heart out, and she helped him breathe again. She spoke to him so calmly, and while he screamed and sobbed, she gently kept encouraging him to let it all out. She told people to keep on walking around them, so they would stop standing there and staring. And then she told him it was okay for him to be sad and feel this way. She understood. She would feel the same way too. His feelings were validated. And she told him he could lay there with her as long as he needed to until he felt better.”

“Eventually, he DID feel better. So they got up, and she told him he could have something from the gift shop to help him feel even better still. Anything up to $50. All he wanted was a tiny notebook and pen to write in about the size of my hand, and a tiny ID tag with Spiderman’s face on it and his name. She suggested some other toys that were even more expensive, and he looked at her and said “No thanks, I’m good.” And he SMILED. And THANKED her. He was exhausted and rattled, as we ALL get after one of his rare epic meltdowns. But what a relief it was that it was over. Thanks to Jen, and her knowledge about what to do. I asked her how she knew how to do that, and she told me that everyone at Universal Studios gets special training when it comes to people who are awesomely autistic, as well as other special needs. I hugged her for the LONGEST time… several times, if I’m being honest. And then the entire family left the store and marched straight over to customer relations without a single pit-stop, to sing Jen’s praises. I showed the sweet woman working there the photos of Jen with Ralph, and she got misty-eyed herself, and hugged me. We showed each other our goosebumps on our arms and laughed and hugged yet again. And she ALSO told me how much training they get when it comes to helping people with various special needs.”

“Many thanks ALSO go out to the incredibly sweet woman working the Dr. Seuss carousel ride who let Ralph ride it again without having to get back in line because she saw the laughter and joy on his face. I wish I had gotten her name. MEGA thanks to Lindsey and Vee from Mythos restaurant who noticed him starting to panic a little when he needed a pencil so he could calm himself down from the over-stimulation at the park. He wanted to draw, and all he could find was a pen. He kept saying “Thank you for my pencil” very anxiously over and over and over again to Lindsey, who very sweetly kept trying to explain she only had a pen, but she would see what she could do. Then she rushed off, despite us telling her we would just go buy him one somewhere as soon as possible so he could draw. But she insisted she wanted to help. And then suddenly Vee appeared and she had a beautiful freshly-sharpened yellow pencil in her hand and the biggest smile for Ralph you ever did see. And when he drew them a thank you card with The Cat in The Hat on it, they thanked him and Vee asked if she could hang it in her office. He was THRILLED at this suggestion. It made him feel SO special that she wanted to keep it in the office to remember him by. Vee, Lindsey, THANK YOU. A big thanks to Augustin from The Mummy Ride, who saw us struggling a little bit with the lockers and rushed over to help, and then without even being asked, befriended Ralph and led us over to the ride via the magical “back way”, complete with elevator and a bypassing of much of the line. And finally, a MEGA THANKS to our friend Sidney J. Dragon for being there and helping Ralph feel better! Bringing him water, also sitting down on the floor with him, and then being our tour guide the rest of the day to make sure everything else went smoothly for us from there on in! He works there too, and stayed with us until the park closed, making sure Ralphie stayed happy! Even though his work shift ended already! You are all MAGICAL people. TRULY. <3″

“A message to all of the people who work at Universal Studios: Please read this and know that my family and I thank you from the bottom of our hearts. I know Ralphie does too. THANK YOU for recognizing that Ralphie is a GREAT kid. A SWEET kid who just struggles with certain things (as we ALL do, neurodiverse or not). THANK YOU for treating him with SO much kindness and patience. THANK YOU to your supervisors and whomever trained you so well. THANK YOU for paying such close attention. THANK YOU for BEING THERE for us today, and for making us feel like Ralph’s well-being was your top priority. He is OUR top priority because we love him more than ANYTHING and ANYONE, but you all only just met him today. And yet you behaved as if you were family. And we TRULY cannot thank you enough.”

“Too often people complain when something goes wrong, but say nothing when something goes RIGHT. Well that’s not how I do things. Maybe it’s because I’m a business-owner myself. But I refuse to go to bed tonight, regardless of how utterly EXHAUSTED I am, until I publicly thank you and sing your praises. THANK YOU. TRULY. <3 And Mama Jen? We love you most of all.
See you next time, Orlando!
The Koppelman Family
(Steve, Lenore, and Ralph) from NYC”

Jen’s wonderful understanding of Ralph’s situation and her compassion for him during a difficult time changed a potentially traumatizing memory into a beautifully healing one. If her kindness inspired you, please share this story and pass it along.

See Also: This Kind Barber Went Above And Beyond For A Child With Autism

The Scent You Pick Reveals A Lot About Your Personality

Find Out What Your Birthstone Reveals About You