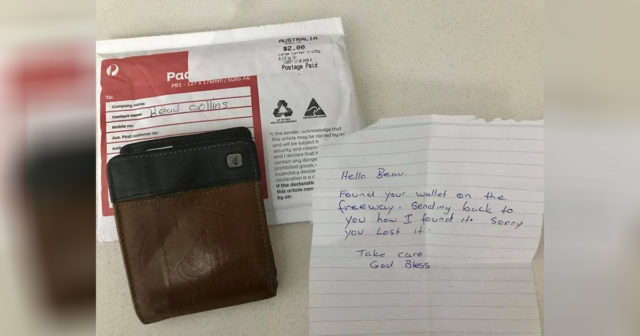 Beau Collins was checking his mail when he found that a kind person had not only found his wallet, but had returned it intact, and they even paid the postage!


“I have been missing my wallet for the last few weeks but just assumed my daughter had hidden it in the house and it would turn up eventually. Today I received a package in the post and inside was my wallet with everything still in it. Inside was also a note explaining it was found in the highway but there was no name. I know it’s a very small chance but if everyone could share this post and see if the person who sent it back to me will see and contact me as I would love to say thank you. It’s great to see there are still honest and decent people in the world,” Beau wrote in a post to Facebook.


The note reads, “Hello Beau, Found your wallet on the freeway. Sending back to you how I found it. Sorry you lost it. Take care, God Bless.”

The sender did not leave his name or a return address, but Beau was hoping to find him so he can thank him personally for his act of kindness.

Whoever the person is, their kindness has inspired thousands of people around the world. 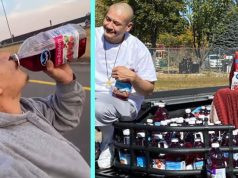 October 17, 2020
POPULAR CATEGORIES
All rights Reserved. All trademarks and service marks are the property of their respective owners © Copyright 2017 - Understanding Compassion
Understanding Compassion uses cookies to help us provide, protect and improve our site. By viewing, you agree to our Privacy PolicyOk