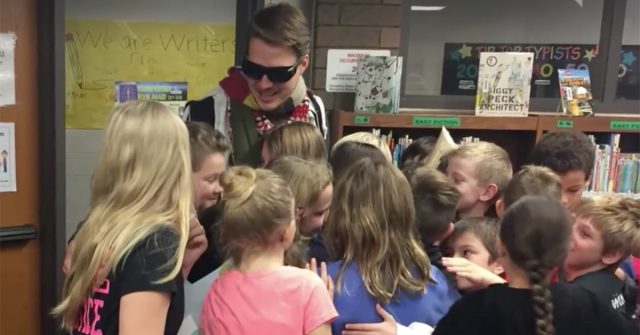 While it’s usually teachers who take the role of inspiring students, one class decided to give a special surprise gift to a teacher they loved: the gift of seeing colors.

The 4th and 5th grade higher ability teacher at Dayton Elementary School, Beau Scott, is color blind. For him when viewing stoplights, the colors all look the same.

His students wanted to do something special for him, and had the idea to buy him a pair of the new glasses that let the colorblind see colors. 5th grader Claire De Lon and 4th grader Nori Patterson both decided to begin trying to raise money to help Beau.

“It must be really hard for him to see that way,” Claire said.

Nori told Claire that she and her family wanted to do something nice for Scott, and the two girls found out they were both trying to do the same thing.

Scott is one of Claire and Nori’s favorite teachers, so the two of them joined efforts to show some compassion towards their beloved teacher.

Claire created and sold decorative mice with candy cane tails, allowing fellow students a chance to contribute anywhere from $5 to $10 each in order to raise the $300 needed for Beau’s glasses.

The special glasses do not work for everyone, so Nori and Claire were both a little nervous, but they thought it would be worth a try.

“I know he would be grateful for the gift from everyone, but I hope it works,” Nori said.

In a cute effort to put the glasses on him without him first knowing their intention, the students told their teacher Beau that they wanted to perform a Harry Potter “magic trick.”

They had him close his eyes, then the students gave him a Harry Potter wand, a broom and his special “Quidditch goggles,” which were indeed the color-seeing glasses.

On the count of three, the compassionate students held up a sign saying “Merry Christmas” with each letter being written on a different color of paper.

At first, he didn’t notice the change, he said. But after lifting the glasses slightly, he could see the difference and became noticeably moved.

“Now you can see at stop lights,” his wife Aliya, who the students invited, said with a smile.

After the Harry Potter game, they all went outside to take a look around.

“Your clothes look, like, different out here than inside,” he told the kids.

Scott has always loved the beauty of the fall season, and now he’s even more excited to be able to see the colors of the leaves changing.

“I’m so excited to see all the colors,” he said.

“It just really, really means the world to me,” he said. “Thank you, guys.”

When asked if he’ll take off the glasses much — “not today,” was his reply.

This video below shows his reaction:

This act of kindness not only helped Beau see colors again, but it also taught an entire class of students how beautiful it is to help one another.

If you know someone in your community who could use an act of kindness, consider starting a local fundraiser for them. Regardless of the size of what you can give, there’s a good chance it will mean a great deal them.

14 Statistics That Show America Is Ready For Stricter Gun Laws

Kind Student Saw An 81-Yr-Old Struggling To Enter A Store, So He Walked Her...

Kind Young Man Stopped His Car To Give A Homeless Man...