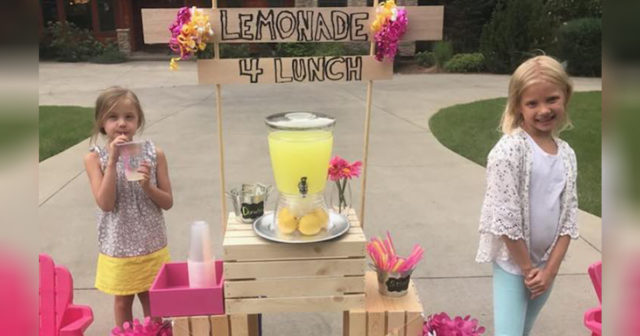 Amiah Van Hill is a second grader with a heart of gold who wants to pay off the student lunch debt for her fellow students at her school.

After reading about Jeffery Lew, the father who crowd-funded enough money to pay off all of the unpaid lunch debt for the Seattle School District, she became inspired to do the same in her community in Idaho by selling lemonade and donating her profits.

Amiah, with the help of her four year old younger sister Aria, set up the lemonade stand “Lemonade 4 Lunch” in the hopes of earning the $40.55 that would cover the unpaid lunch debt for her school, Hayden Meadows Elementary School.

Within an hour, the wonderful duo met their goal and they were able to help the children at her school, and it started something amazing.

“We are very proud of [Amiah] for the work she has done. Our school believes in giving back to the community and we work to instill that value in all of our students,” Principal Lisa Pica said.

“We are thrilled that Amiah has embraced that value at such a young age and we are so very proud that she has taken it upon herself to find a way to help those in need. She is a very special little lady.”

Amiyah’s mother, Rachel Van Hill, said that after the girls discovered it was relatively easy to pay off a school’s debt, they thought, “Why don’t we help more schools?”

These compassionate girls setup another lemonade stand shortly after to raise money to pay off the lunch debt at two more schools in their area, and this time they raised over $300.

Now the girls have decided to try and pay off the entire student lunch debt of the d’Alene Public School district, which comes to around $23,000.

While this seems quite a bit higher than what even a professional could hope to earn from selling lemonade, the girls setup a GoFundMe to help them accomplish this task, and they were able to raise over $14,000 to help the struggling students in their community.

“We are so impressed with Amiah’s big heart and her desire to help cover the unpaid tab from our school lunch program,” said Scott Maben, a spokesman for Coeur d’Alene Public Schools. “She heard about families who struggle to pay, and she took action.” “Amiah is an inspiration, and we are excited to recognize her for her good deed.”

If you see something or someone in your community that you want to help, give it a try. Start small, and like the wonderful Van Hill girls, your small act of kindness can turn into a wonderful ripple that helps a large amount of people.

Watch these kind girls making a difference in the following video:

A Fifth Grade Teacher Found This Thoughtful Thank You Note From His Student; Thousands...