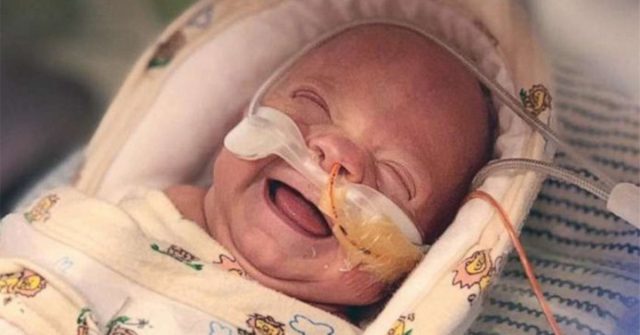 Finn James Hill, a baby boy born weighing a mere 1 pound and 2 ounces, was finally able to go home with his parents after spending more than 100 days in the Neonatal Intensive Care Unit.

Born nearly four months ahead of his due date via an emergency cesarean section, doctors gave Finn only a 50% chance of survival. But 113 days later, he was released into the loving arms and into the home of his parents, Jessica and Chris Hill.

“It didn’t hit me until we left and it was the three of us for the first time,” Jessica said. “I knew we wouldn’t have to take him back. It was everything we hoped and prayed for.”

The sweet couple’s journey to being parents has been difficult, to say the least. They experienced nine years of infertility, undergoing multiple cycles of in vitro fertilization, using their own egg and sperm. After several unsuccessful attempts, the couple looked into embryo adoptions.

Jessica and Chris met a couple on Facebook who they were thankfully able to adopt eight embryos from. Their first attempt was unsuccessful, but on their second attempt, the couple became pregnant with twins.

At 10-weeks, the couple lost baby B, but baby A, Finn, survived. At 24-weeks Jessica suffered a blood clot which caused her water to break and led to premature labor, and Finn was born weighing just 1 pound 2 ounces.

“Initially, it was just shock,” Jessica said. “I started crying and asking my doctor, ‘What are his chances of survival if you take him out now?’ The doctor said he was safer on the outside than he was inside.”

Micro preemie is a medical term for babies born either weighing less than 1 pound 12 ounces or before 26 to 28 weeks of gestation. Longer stays in the hospital for micro preemies are almost always required.

Less than two weeks after being born, Finn was transferred from Lakeland Regional Medical Center to Nemours’ level 4 NICU.

“I felt a little bit like a failure to be honest because one second he’s inside of [me] and I’m protecting him, and the next he’s out and in a complete separate part of the hospital,” Jessica recalled. “It was terrifying.”

The next few months were an intense struggle for Finn. He underwent two surgeries; one to repair a hole in his heart and another to correct Necrotizing enterocolitis; a serious illness which can affect a preemie’s intestines. Finn also relied on a ventilator to help him breathe.

Finn’s health greatly improved after surgery, and one month after he first came into this world, Jessica was able to hold her son for the very first time.

“It was unbelievable,” Jessica explained about first holding her son. “You only get to hold their hands, and I had to make due as far as touch goes, but it was a huge relief to watch his stats improve [as I did] skin-to-skin with him. It made me feel like my mom duties were kicking in and he knew who I was.”

After Finn’s continued recovery and after nearly four months, Finn was finally released from the hospital and was allowed to go home for the first time. He is now 4 months old, weighing 5 pounds 5 ounces, and his parents couldn’t be happier. Jessica said that he is a good sleeper and is so very loved.

“He just always has this grin on his face. He is so loved, I can’t even tell you,” she said.

People around the world are praying for Finn’s recovery and are sending the smiling baby boy and his parents loving messages of encouragement. Jessica and Chris regularly share updates about Finn on their Facebook page which is dedicated to their little fighter: Fighting Finn. To them, everything has been worth it.

We are grateful for Finn’s remarkable recovery and that he has finally made it home to be with his loving parents.

A post shared by Understanding Compassion (@understanding_compassion) on Oct 21, 2019 at 8:53pm PDT

Two Kind Friends Grew Their Hair Out And Donated It Plus $8,000 To Wigs...