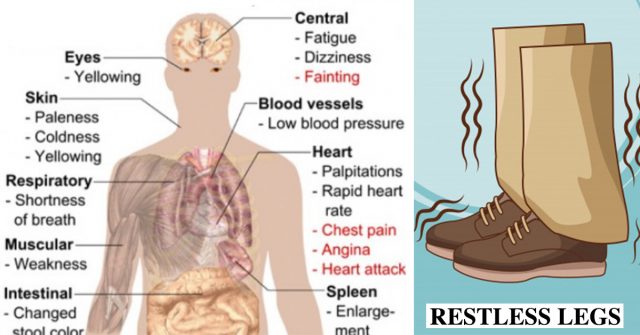 Have you felt overly tired or exhausted lately? Does climbing the stairs or a fast-paced walk leave you with shortness of breath or feeling winded even though you’re in good shape? If so, your body might be asking you for more iron.

Iron plays a very significant role in our health as it helps to transport oxygen throughout the entire body. It is also the most common nutritional deficiency for people living in the United States. Prolonged iron deficiency can lead to red blood cells not receiving enough oxygen and becoming unhealthy; a condition known as iron deficiency anemia. Without enough iron, the body doesn’t produce enough of a substance within red blood cells that enables the cells to sufficiently carry oxygen.

“If you’re not getting sufficient oxygen in the body, you’re going to become fatigued,” says Paul Thomas, a scientific consultant to the National Institutes of Health. This type of exhaustion can affect everything from one’s brain function to the immune system’s ability to fight off infections. For pregnant women, severe iron deficiency increases risks that a child may be born too early, or smaller than normal.

Roughly 10% of women in the U.S. are iron deficient according to data from the Centers for Disease Control and Prevention, which means that 16 million women need to spot the signs early and make sure that they are getting enough iron in their diet.

The most common symptom of iron deficiency is high levels of fatigue, weariness and tiredness, affecting more than 50% of those who are deficient. Feeling unable to focus and concentrate, as well as feeling unexplainably irritable, cranky or weak could be signs of an iron deficiency.

Not getting enough iron causes there to be a drop in oxygen levels in the body, leaving muscles and tissues without enough O2 and causing the heart to pump harder to supply the needed amount.

Restless or fidgeting legs can be related to the body not receiving enough iron. This happens when the body feels regular discomfort, and fidgeting the legs acts as an activity to distract the mind and to ease the uncomfortable feelings. John Hopkins Medicine reported that 15% of people with Restless Legs Syndrome (RLS) also have an iron deficiency. The symptoms can increase or decrease based on the level of iron deficiency.

While increased hair loss is not always connected to the body’s iron levels, it a symptom of iron deficiency, especially when it has escalated to anemia. When there isn’t enough iron producing hemoglobin in the blood, the body prioritizes giving oxygen to the vital areas of the body and reduces the amount given to the hair and skin. If you notice irregular amounts of extra hair in your brush, it’s worth looking into via a checkup.

Hemoglobin helps give skin its natural shade and color. When the body is lacking in iron, skin color may become lighter and paler as the body isn’t getting enough iron to produce hemoglobin; a red protein responsible for transporting oxygen in the blood. This symptom can also show up as paleness of the gums and the inner side of the lips.

When the body isn’t getting enough oxygen due to an iron deficiency, the heart has to work extra hard to supply a sufficient amount of O2. Heart palpitations which cause the heart to race unusually fast for a short period of time can be a sign of an iron deficiency when the deficiency has existed for a long time.

Similar to fatigue, when Hemoglobin levels, which enable your red blood cells to carry oxygen to all areas of the body, are low, oxygen levels become low and can lead to shortness of breath. Simple activities such as walking or climbing stairs can cause large increases in one’s breathing rate, as the body struggles to get enough oxygen due to low iron levels.

While there are many different causes of headaches and dizziness, they may be related to having an iron deficiency. This is due to low levels of hemoglobin in red blood cells which reduce the amount of oxygen that can reach the brain. The blood vessels in the brain can swell and open in order to increase blood flow for more oxygen, but the resulting pressure can also lead to the symptoms of headaches, lightheadedness or dizziness.

Having an unusual craving for non-food items which the body believes may contain iron is a condition called “pica.” It involves one’s seemingly random cravings to eat things such as mud, ice, clay, dirt, chalk or paper and is a sign of iron deficiency. Pregnant women sometimes report temporary symptoms of pica during their pregnancies.

While a rare symptom, brittle or spoon-shaped fingernails can be signs of an iron deficiency. Brittle nails can chip and crack easily, and spoon-shaped nails occur when the middle area of the nail dips and the edges are raised to give a rounded appearance like a spoon.

Getting enough iron is often achieved simply by adjusting one’s diet to include natural foods that contain high levels of iron. Foods such as spinach, red meat, quinoa and turkey all have high levels of iron. If you think you have symptoms of an iron deficiency, always consult first with your doctor as self-diagnosing is not recommended.

A post shared by Understanding Compassion (@understanding_compassion) on Feb 28, 2019 at 10:44am PST

To All Nurses: I want you to know we admire and look up to...