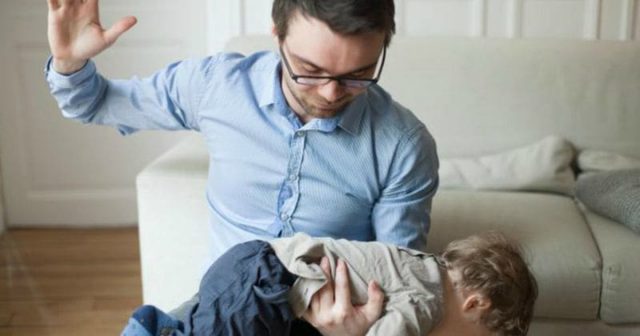 A new study found a correlation between children who are hit or spanked as a form of punishment by their parents and an increased likeliness of physically abusing romantic partners in adulthood.


The University of Texas Medical Branch surveyed nearly 800 adults to understand whether being struck as a child can lead to a more aggressive manner in behavior as an adult.

The study found that most adults who behave violently in relationships were struck by their parents as youngsters.

While spanking is not entirely attributable to this behavior, it does indicate the fact that when children learn that the only solution to a conflict is physical violence, they do in fact copy that exact same behavior by responding to their other relationships in the same way and by acting violently towards their romantic partners when they grow up.

Spanking traumatizes a percentage of children, as the intense pain is received long before their little minds can understand what is happening. All that their minds and body remember is that an adult much larger than them and who they love, caused them a shocking amount of pain. Spanking as a form of punishment does more harm than good, and is usually what parents who have not learned healthy ways of educating children or are unable to control their own anger and frustrations resort to. Parents who have studied how to healthily raise a child know that violence does not help, and they prefer to use rewards to encourage good behavior.

Researchers for the study asked 19 and 20 year-olds how often they had been struck, slapped, or spanked and found a significant correlation between corporal punishment and dating violence.

Of the 758 that were questioned, nearly 68% claimed to have experienced corporal punishment as youngsters and around 19% admitted to violence towards their lovers.

The study’s lead author, Jeff Temple, a psychiatry professor at the University of Texas Medical Branch reported on the findings explaining, “Regardless of whether someone experienced child abuse or not, spanking alone was predictive of dating violence.”

Corporal punishment in the home (also called physical punishment) refers to an act by a parent or other legal guardian causing deliberate physical pain or discomfort to a minor child in response to some undesired behavior by the child.

Temple defined child abuse as being hit with a belt, leaving noticeable bruises or requiring to go to a doctor or a hospital.

“Kids who said they had experienced corporal punishment were more likely to have recently committed dating violence.”

Researchers also noted that these results were the same regardless of a subject’s age, sex, ethnicity, parental education, and experience with childhood abuse.

While many factors such as mental health or substance abuse can cause dating violence, children subjected to physical violence must be considered as a factor among many other things.

The practice of hitting a child has been forbidden in several countries across the world such as France, Sweden, and Scotland.

Child abuse is more common than many people care to believe. In the United States each year more than 3 million reports of child abuse are made which involve almost 6 million children.

It is legal, in all 50 states in the US, to hit a child, but they all differ widely when it comes to what form of punishment is precisely allowed.

Many parents have been ill-educated to believe that spanking children leads to desirable results; where the child will fear punishment and obey the parents commands. In reality, spanking: 1. inflicts damage to the child and can potentially traumatize them, 2. leads 68% of them to commit violent behavior for the rest of their lives, and 3. shows a lack of the parent’s understanding of developmental psychology.

Temple is one of the many pediatricians fighting against the American culture for corporal punishment, and seeking to help children grow up to live happy and healthy lives.

He says adults have a tendency to claim they turned out just fine after having been struck as a youngster.

In Japan for example, there is the lowest rate of crime in the world, and parents do not physically discipline their children. Instead, children are allowed to behave naturally, as their developmental level expresses itself during their early years. Then once they reach an age where they are mentally able to understand, they are educated on why we do certain things and why we don’t do certain things; then they can understand.

An NSPCC spokesperson said: “There is clear evidence that physical punishment damages children’s wellbeing and is linked to poorer outcomes in childhood and adulthood.

“We would encourage parents to use alternative methods to teach their children the difference between right and wrong, with a positive parenting approach such as setting clear and consistent boundaries.”

The proverb “Spare the rod, spoil the child” is something of ancient times. Now such acts are punishable by law, and researchers have the data to prove that it harms, rather than helps children and society.

“My job is not to tell parents what to do, but to rather provide evidence to show that this [corporal punishment] is potentially harmful,” Temple explained.

If someone you love is currently raising children or will do so in the near future, please share this article with them, and encourage them to educate themselves with healthy means of raising children according the psychology and science.

If You Love Her, Don’t Destroy Her.

Fun Quiz: What You First See Reveals A Lot About Your Character