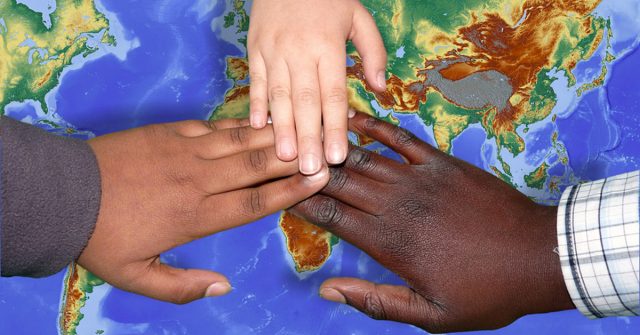 What does research say about how immigration impacts crime in U.S. communities? We turned to the experts for answers.

Research has shown virtually no support for the enduring assumption that increases in immigration are associated with increases in crime.

During the past 20 years, Immigration-crime research has found no backing for the immigration-crime connection. While there are always individual exceptions, these are of very small percentages: less than .001%. The real numbers demonstrate that immigrants commit fewer crimes, on average, than native-born Americans.

Census data spanning four decades from 1970 to 2010 for 200 randomly selected metropolitan areas was analyzed by researchers, which allowed them to assess whether the relationship between immigration and crime changed in association with the broader U.S. economy, the origin of immigrants, and the number of immigrants.

The most important finding from the research was that for murder, robbery, burglary and larceny, as immigration increased, crime decreased, on average, in American metropolitan areas.

These associations are strong and stable evidence that immigration does not cause crime to increase in U.S. metropolitan areas, and may even help reduce it.

Researchers believe that it’s possible that immigration reduces crime by revitalizing urban neighborhoods and by creating vibrant communities through generating new economic growth, thus reducing poverty levels in such areas and the associated crime that comes with poverty.

While nearly everyone agrees on the value of immigrants in America, as America is the world’s great melting pot of immigrants, many believe that immigrants living in the U.S. without a proper visa, or “illegally,” are prone to higher levels of crime. Research was conducted to find the exact statistics on crime and illegal immigrants in the state of Texas, and compared it to the crime levels of legal immigrants and native-born Americans.

The research discovered that undocumented immigrants are considerably less likely to commit crime than native-born citizens, with immigrants legally in the United States even less likely to do so. A large amount of verified studies published by different universities in different locations clearly illustrate the consensus: 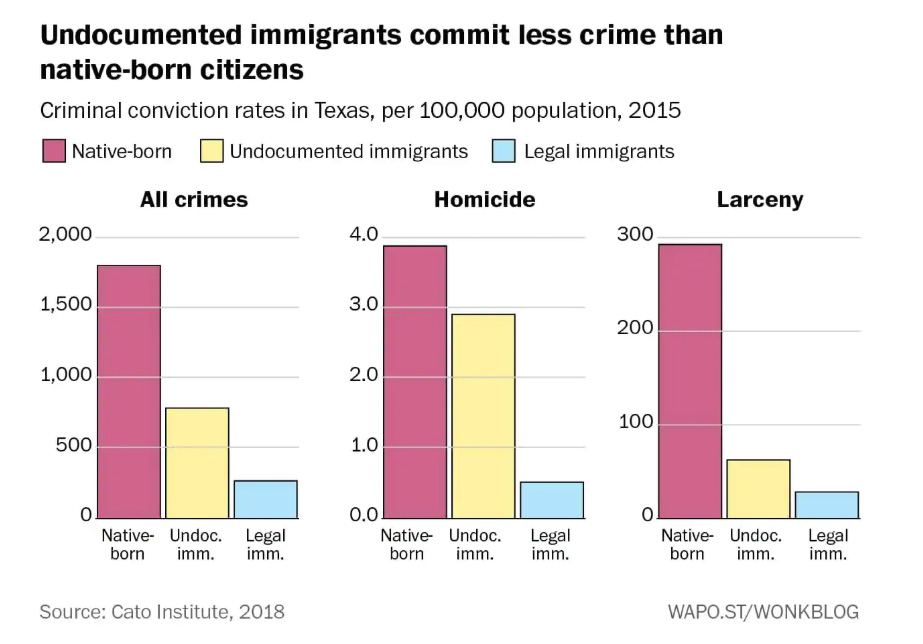 The first study, published by the libertarian Cato Institute in February, examines criminal conviction data from 2015 provided by the Texas Department of Public Safety. It found that native-born Americans committed more crimes than both illegal immigrants and legal immigrants.

There were 56 percent fewer crimes committed by illegal immigrants than by native-born Americans in Texas in 2015. 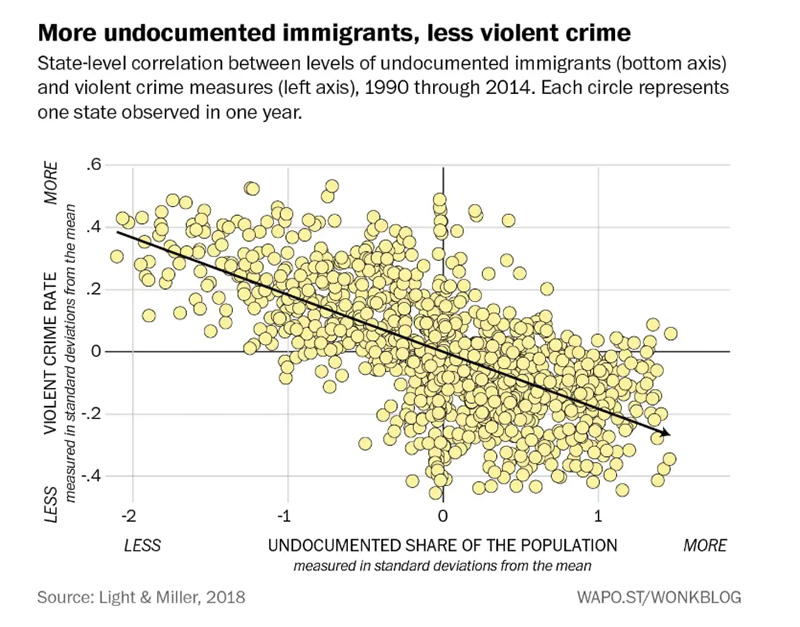 This revealing study, published in the journal Criminology, looked at population-level crime rates: Do places with higher percentages of undocumented immigrants have higher rates of crime? The answer came simply from looking at the very real data; a very clear no.


From all of the research one finding remains clear: Cities and neighborhoods with greater concentrations of immigrants have lower rates of crime and violence for both legal and illegal immigrant populations.

America is a great nation built on immigration, the great melting pot of the world where people of various cultures come together to live in a land of freedom.

If you know a recent immigrant or meet someone from another country, go out of your way to be a little kinder to them this week. All of our ancestors were immigrants just a few generations ago, at a time when America welcomed all people with open arms without papers or ID’s. Those fleeing poverty and persecution left their home countries and were lovingly embraced by America; that’s what the American dream is all about.

All humans are one family, we’re all brothers and sisters, who immigrated out of Africa just a few thousand years ago.

Kindness is what makes life worth living, and as all great spiritual leaders have taught us, especially Jesus Christ, “love your neighbor as yourself.” 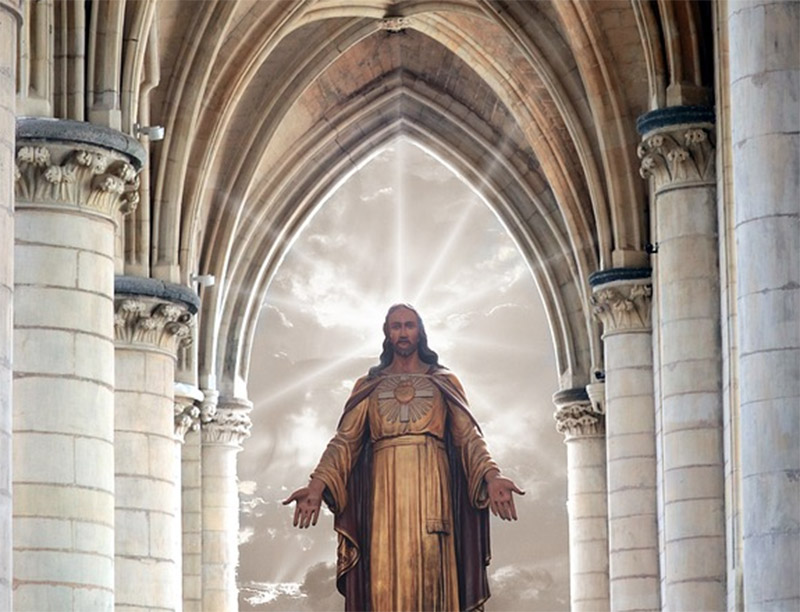 Jesus Christ and Christianity is specifically clear on how to treat the poor and immigrants when they come into your country without a visa in Matthew 25:31-46 in the bible:

31 “When the Son of Man comes in his glory, and all the angels with him, he will sit on his glorious throne. 32 All the nations will be gathered before him, and he will separate the people one from another as a shepherd separates the sheep from the goats. 33 He will put the sheep on his right and the goats on his left.

34 “Then the King will say to those on his right, ‘Come, you who are blessed by my Father; take your inheritance, the kingdom prepared for you since the creation of the world. 35 For I was hungry and you gave me something to eat, I was thirsty and you gave me something to drink, I was a stranger and you invited me in, 36 I needed clothes and you clothed me, I was sick and you looked after me, I was in prison and you came to visit me.’

40 “The King will reply, ‘Truly I tell you, whatever you did for one of the least of these brothers and sisters of mine, you did for me.’

44 “They also will answer, ‘Lord, when did we see you hungry or thirsty or a stranger or needing clothes or sick or in prison, and did not help you?’

46 “Then they will go away to eternal punishment, but the righteous to eternal life.”

Jesus also did teach that those who repent from uncompassionate ways and return to loving and helping one another can be saved.

As the majority of immigrants entering America illegally are families trying to escape poverty, starvation, and who are trying to make better lives for themselves and for their children by living in America, let’s remember the compassionate teachings of Jesus Christ and welcome them with open arms, with open hearts, and help them to make better lives for their beloved families.

“The bosom of America is open to receive not only the opulent and respectable stranger, but the oppressed and persecuted of all nations and religions; whom we shall welcome to a participation of our rights and privileges.”
~George Washington

“Give me your tired, your poor, your huddled masses yearning to breathe free, the wretched refuse of your teeming shore, send these, the homeless, tempest-tossed, to me: I lift my lamp beside the golden door.”
~The Statue Of Liberty

Kind Student Bought New Jordans For Classmate Who Was Being Bullied To Make Him...

Fun Quiz: How Fast Can You Find The Odd One In All 5 Pictures?