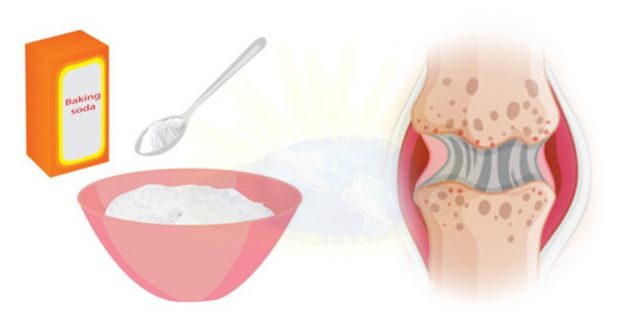 Baking soda is a common ingredient in most kitchens and has many practical uses. Did you also know that baking soda can be used a pain reliever if you suffer from arthritis? Researchers have found that baking soda may be a possible remedy for the pain and symptoms associated with Rheumatoid Arthritis (RA). Natural health practitioners also support its use in helping to combat the pain and stiffness associated with RA.

Rheumatoid Arthritis is a chronic condition where one’s immune system mistakenly attacks healthy joints. The symptoms of RA can include pain, swelling, stiffness, and loss of function in different parts of the body; such as hands, wrists, shoulders, knees and feet. RA causes joint pain, joint swelling and fatigue.

While the exact cause of RA is not known, it may result from a combination of factors including: genetics, long-term smoking, diet, and prescription medications. When someone has arthritis, their body is under a constant state of attack, and the body responds by sending cells called macrophages to the troubled area to get rid of the perceived threat. This is where the pain associated with arthritis comes from.

A post shared by Understanding Compassion (@understanding_compassion) on Nov 15, 2018 at 12:27pm PST

Sodium bicarbonate, the active ingredient in baking soda, gives those cells the signal to stop attacking. According to research done at Augusta University in Georgia, baking soda appears to alert cells that the body isn’t under actual attack, which helps alleviate the pain associated with Rheumatoid Arthritis.

In his research, Paul O’Connor, PhD, an associate professor and director of the physiology graduate program at Augusta University, found that, “After drinking water with baking soda for two weeks, immune cells called macrophages shifted from a type that primarily promotes inflammation, called M1, to a type, called M2, that reduces it.”

Baking soda is also known to stabilize the pH level in the body, which is important in lowering the overactive autoimmune response in arthritis sufferers and decreasing inflammation. Normally, the body’s pH level rests around 7.45, but when the body becomes too acidic, the spleen, heart, and kidneys work harder to compensate for the internal pH change.

According to Kara Bauer, Patient Expert of HealthCentral, “To buffer this acidity, the body has to rob existing minerals from the bones and tissue such as calcium, magnesium, sodium and potassium.” This responses causes inflammation in joints and other areas of the body and makes them more susceptible to arthritis pain. Baking soda helps to change the body’s pH level from acidic to alkaline, stopping the body from taking needed nutrients from bones and tissue.

While using baking soda could be a safe, inexpensive, and effective way to treat RA, always remember to check with your doctor first.

Have you noticed baking soda helping reduce your arthritis pain?

See Also: This Is What Happens To The Body When You Eat Two Ripe Bananas Every Day

11 Amazing Things That Happen When You Embrace Being Alone

Kind Elderly Woman Lovingly Held The Hand Of Shouting Man On Train Until He...