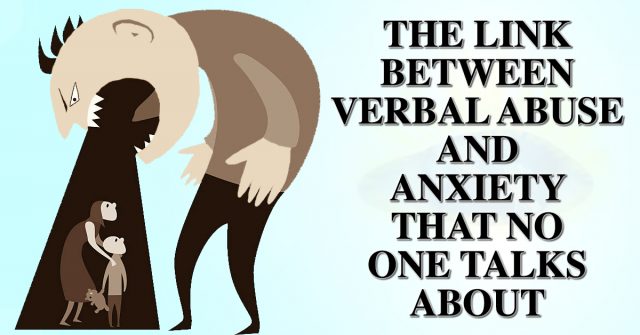 Research consistently shows a deep connection between anxiety and long-term verbal abuse. When a person goes through a large amount of stress from receiving regular verbal abuse, a form of trauma can develop over time, and anxiety is one of the main symptoms.

Defining verbal abuse can get messy. Everyday relationships are far from perfect, and experiencing occasional angry outbursts can be common as we journey through life and foster intimacy in our closest relationships.

But here’s the thing: consistent yelling, insulting, criticizing and disrespecting someone is unhealthy and can harm the self-esteem of the individual being affected, and can also lead to trauma and anxiety. In fact, verbal abuse can be as harmful as physical abuse.

Verbal abuse encompasses many arenas and includes both real life and online cyber-bullying.

While any form is damaging, research shows that verbal abuse has an impact on both hemispheres of the brain. A disconnection of the hemispheres and a thinning in sections of the prefrontal cortex and medial temporal lobe can occur, causing people to disassociate, similar to those who have suffered physical assault or sexual abuse.

The hard part about verbal abuse is that it’s less tangible. It’s harder for someone suffering from verbal abuse to distinguish the root of the cause, as compared to the physical acts of physical or sexual abuse. Victims of repeated verbal abuse can also often end up incorrectly blaming themselves for the verbal abuse coming from others.

One Harvard study found that those who had never experienced or witnessed physical, domestic or sexual abuse, but who had experienced being bullied in their adolescence, showed similar changes in brain activity to those who had suffered from both actual physical and sexual abuse. Harvard news reported; “Scolding, swearing, yelling, blaming, insulting, threatening, ridiculing, demeaning, and criticizing can be as harmful as physical abuse, sexual abuse outside the home, or witnessing physical abuse at home, notes a report in the April issue of the Harvard Mental Health Letter.”

· Low self-confidence and lack of enthusiasm

· An inability to confidently make decisions

The psychological damage from verbal abuse is something to be taken seriously.

Verbal abuse is hidden in shame, and verbal abuse usually happens in private, whether it’s at home, school or even at work. Those who are verbally abusive often choose private places to insult, which keeps their actions from being criticized by others, and in essence, keeps the shame deeply hidden.

People who abuse tend to lack basic relationship skills such as appreciation, compassion and tenderness. They skip over and usually aren’t aware of opportunities to show love and support towards the person they’re with.

Verbal abusers tend to use name calling in order to manipulate and control. A person who believes in the negative self-image being projected by someone who is verbally abusive often becomes more submissive and easier to control.

When someone expresses good feelings, joy, or even excitement, verbal abusers often attack. They feel like they are losing their control when someone feels happy and is less dependent on them, so they respond by verbally sabotaging another’s happiness in order to gain their submissiveness. Feelings of happiness could also open up childhood memories within the abuser from when they were first harmed as a normal child themselves.

People who verbally abuse also use control to attack someone’s interests, hobbies and activities. The theme of undermining someone’s joy is perpetuated and the verbal attacks can become more frequent when the abuser feels more out of control.

6. Abusers Often Act As If They Are Always Right

Abusers tend to be self-righteous in their way of thinking. They portray with force that they are consistently right, exhibit limited understanding and do not consider other points of view. They rarely apologize or admit to making a mistake. At the same time, they are quick to point out the mistakes of others.

People who are receiving the verbal abuse usually avoid social situations due to an underlying emotion of deeply rooted shame. If they interact with others, they often feel uncomfortable and anxious, as their nervous system remembers social interactions as sources of verbal abuse. Continued verbal attacks consistently tear down self-esteem, and for many, take away their feeling of hope.

People who verbally abuse usually blame others for just about anything. Consistent finger pointing and shame riddled blame harms others and solidifies an abused individual’s idea of their own lack of self-worth.

Unable to take responsibility for their own abusive actions, verbal abusers paint the false picture that everyone else is at fault. They tend to believe that their verbal attacks are justified. They likely suffered the same abuse as children growing up and are continuing the unhealthy cycle by abusing others.

If you or someone you know is experiencing verbal abuse, get help. Therapy, shelters, lifelines and 12 Step Programs are options to start reclaiming one’s life again.

You are not alone, you are loved, and you deserve to live a happy and healthy life free from verbal abuse.

For 7 ways to reduce anxiety and to become calm, read this insightful article.

Why We Need To Stop Chasing Success And To Start Enjoying The Little Things...