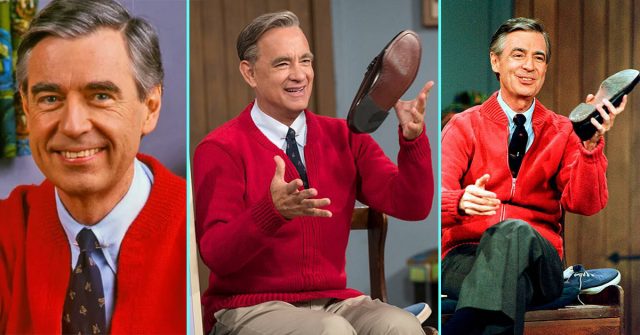 Fred Rogers was a champion of kindness who spent his life teaching children how much they are loved, and also the value of being kind to their neighbors.

In the upcoming film A Beautiful Day In The Neighborhood set to release in November, the first trailer just revealed that Tom Hanks is playing Mister Rogers, and he fits the role perfectly.

Who is Mister Rogers?

“You’ve made this day a special day, by just your being you. There’s no person in the whole world like you; and I like you just the way you are.”
~Mister Rogers

Rogers was ordained and trained as a minister after college, but after seeing the horrors of the Vietnam war; where more than 50,000 U.S. soldiers and more than one million Vietnamese soldiers and citizens were killed, his heart was deeply troubled and he was moved to make a difference. He saw cartoons on T.V. advertising fighting and violence to very young children; where cute characters spent the entire episode bashing each other on the head or fighting with each other, and he could not help but see how this type of early education was contributing towards making a violent world.

“I went into television because I hated it so,” Fred Rogers once explained to CNN when asked about why he began his career in television. “I thought there was some way of using this fabulous instrument to be of nurture to those who would watch and listen.”

“Won’t you be my neighbor?” was a famous expression that Mister Rogers used in each of his shows to teach children to be inclusive of others and to love and accept their neighbors. Rogers believed he could nurture children with kindness, and could provide a T.V. experience that taught them the values of love, respect and compassion.

“I’ll never forget the sense of wholeness I felt when I finally realized, after a lot of help from a lot of people, what, in fact, I really wasn’t. I was not just a songwriter or a language buff or a student of human development or a telecommunicator, but someone who could use every talent that had ever been given to me in the service of children and their families,” Rogers said. “The space between the television set and that person who is watching is very holy ground.”

Through his gentle and loving form of teaching, he helped millions of children understand and process many of the events happening throughout the world.

Having such a wonderful legacy of kindness and compassion, it was very important to cast an actor who could fill the shoes of Mister Rogers, and the joyful Tom Hanks looks to be a perfect fit.

While many hoped that Disney would create the movie to fully capture the essence of Mister Rogers’ love, Sony, who has recently tended to release movies with depressing storylines, ended up producing it. The trailer looks wonderfully promising though, so we’re excited to see how it turns out!

Mister Rogers was a wonderful man, and his lifetime of service of helping our children learn to be kind deserves to be remembered and celebrated.

Here is the trailer for A Beautiful Day In The Neighborhood starring Tom Hanks:

Here are some of the best moments from Mister Rogers: