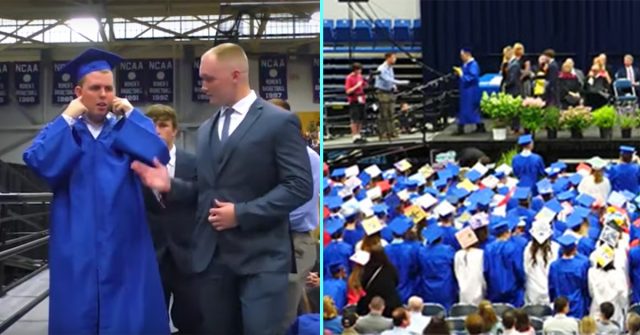 During his high school graduation ceremony, a sound-sensitive student with Autism walked up to the stage to receive his diploma; with fingers in his ears to block the loud noises, but instead of applause his kind classmates gave him a standing ovation, in total silence.

The National Institute of Mental Health explains that:
“Autism spectrum disorder (ASD) is a developmental disorder that affects communication and behavior. Although autism can be diagnosed at any age, it is said to be a “developmental disorder” because symptoms generally appear in the first two years of life.” There is a wide variation in the type and severity of symptoms people experience, therefore they refer to Autism as a “spectrum” disorder.

People with Autism tend to have difficulty with communication and interaction with other people, exhibit restricted interests and repetitive behaviors, and have symptoms that hurt the person’s ability to function properly in school, work, and other areas of life. For Jack Higgins, his severe form of Autism makes him very sensitive to noise.

His parents, Barbara and Pat, like every other loving Mom and Dad wanted their son to be able to participate in the school’s graduation ceremony, but they were concerned that he would be overwhelmed by sitting in a large and noisy auditorium packed full of people. They approached Jack’s teacher, Erin Appelle, and asked if there was anything they could do.

“In our school we have a banner as you enter all of our school buildings: #WhatsBestforKids,” Lou Riolo, the principal of Carmel High School wrote in an email. “It sounds corny but makes sense. But in this case what was best for Jack?”

Lou wanted to honor the eight years Jack had spent in the school’s program for students with cognitive, learning or behavior challenges, so he thought of a wonderful way to both include him and to meet his needs. He decided that they would let Jack come on stage first to receive his diploma, and before doing so, they would ask all students if they would please only give silent ovations and golf-claps in order to create a safe environment for their classmate. Lou and his staff knew how rowdy students can get when they’re excited, but they had faith that they could pull it off for Jack’s sake.

“It was important to pull this off,” Lou said. “First off for Jack, second for his family who could experience the same event as every other parent/family whose child reaches this milestone was of great importance. Lastly to give the opportunity to everyone in that arena a chance to assist in making one young man’s and his families graduation dreams a reality.”

On graduation day, Lou briefed the audience about Jack’s condition and asked the graduating class if they could help their classmate:

“I’m going to ask a big favor of everybody today. I would like everyone to not clap, and not cheer. That’s correct. Not clap and not cheer, because it may overstimulate Jack as he comes to the podium to receive his diploma,” Lou said.

After his announcement, he called Jack Higgins up to the stage to receive his diploma. Jack’s two brothers loving walked with him.

Jack approached the stage very cautiously, with fingers in his ears to block any possible noises from clapping or cheering. Yet the entire school and graduating class met him with only smiles, soft golf-claps, and his needed silence. Students refrained from clapping, cheering, or even talking to one another during Jack’s entire graduating ceremony; an extraordinary act of kindness and care for their classmate with Autism that has caused their story to go viral online and in the media.

Not only did Jack’s kind classmates respect his need for silence and no loud noises, but they gave him a silent standing ovation.

Teachers did not ask the students to do this, which made the situation all the more remarkable.

“The students were amazing,” Principal Lou said. “They are a class act and superseded expectations. For example them rising to their feet after Jack received his diploma was them. It was not preplanned and no one told them to act like that that. They felt compelled to show their support in that way. They made that amazing compassionate gesture on their own.“

Lou was so proud of his graduating class for their compassion and understanding, and he was also deeply proud of Jack for having the courage to walk across the stage; something that was more difficult for him to do than most of us can imagine.

“I have been lucky and blessed to see some really remarkable things in my 31 year career but this so far has to be the most incredible. But as much as the students rose to the occasion so did Jack. Since Jack is very limited verbally, how overwhelming was if for him with a large crowd and expectation that it would be loud.? It was so brave of him to take that walk which must have seemed like forever and he did it with grace, class and strength,” Lou said.

“All for one and one for all, united we stand, divided we fall.”
~Alexandre Dumas

The following video shows Jack’s full graduation and the breathtaking beauty of the kindness of his classmates:

See Also: Kind Employee Lies Down On Busy Walkway Next To Autistic Child To Comfort Him During A Break Down