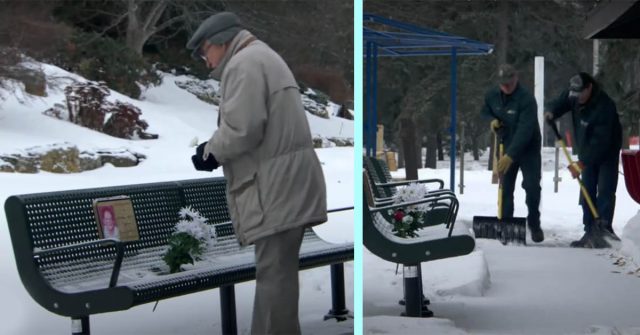 When city workers Jerrod Ebert and Kevin Schultz made a visit to Lakeside Park in Fond du Lac, Wisconsin, they didn’t expect to find anyone there because of the snow. Yet on this snowy day, they saw an elderly man waiting in his car in the park.

The two men weren’t sure what the elderly man was up to, but after watching him for a little while, they eventually realized what he was doing. There was a bench in the park dedicated to a woman named Betty Caldwell who had recently passed, and the man in the car was her husband, Bud Caldwell.

Betty had loved the song “Daisy a Day”, so when after 55 years of marriage they could no longer be together, Bud would regularly bring daisies for his late wife to her bench. As there was too much snow for Bud to walk up to the bench, he had been waiting in his car.

Bud thought that no one had noticed him, but Jerrod and Kevin watched the devoted husband out in his car on this snowy day.

“It took us both back a little bit thinking, my gosh, his devotion is that strong that he still comes when he can’t make it to the bench even,” Jerrod said.

The next day when Bud came to the park, he found that the walkway to Betty’s bench, and only the walkway, had been shoveled. Thanks to a stranger’s kindness, he could now bring flowers to his wife’s memorial.

“One day I pulled up there and there’s the walk shoveled,” Bud explained gratefully. “My knees about buckled on me.”

Jerrod and Kevin began shoveling the walkway daily before Bud arrived, and they did it even though the only person who was coming to the park was Bud.

“We were just doing what we felt was our job,” said Jerrod. “Some intuition, be it divine or otherwise says this is why you’re here – to help one another.”

Bud now is able to visit the picture of his wife on the memorial bench year round. He speaks to her, and often sings to her, her favorite song, Daisy a Day.

“See, you tomorrow, munchkin,” Bud said as he walked away from the bench. “Love you. Always did. Always will.”

Watch this video of Jerrod and Kevin shoveling the snow just for Bud, you are loved:

After Runner’s Hamstring Tore During The Olympics, His Loving Dad Helped Carry Him Across...