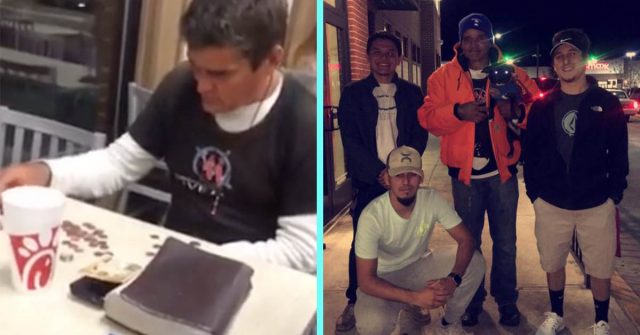 Ryan Cook and a few of his friends came into a Chick-Fil-A in Corpus Christi, Texas, to enjoy a meal. As they were ordering, they noticed a homeless man sitting nearby who was counting his coins on his table, trying to figure out if he had enough to buy a meal.

The young men asked the cashier if they knew anything about the homeless man, and the cashier informed them that the man comes in all the time, but usually only asks for some water to give to his dog.

“This was a homeless man that me and my buddies saw in Chick-Fil-A struggling to buy a meal,” Ryan wrote in a post online. “He had a worn bible on the table with a picture of Jesus and some change he was counting. The staff said he came in all the time but didn’t bother anyone or ask for handouts except for when he is looking for water for his dog ‘Sock’.”

Reflecting on the homeless man’s situation, Ryan, Joshua and Alberto decided to get him some Chick-Fil-A gift cards to make sure that he could have enough to eat. They realized that the homeless man might need a warm winter jacket as well, so they went to a sporting goods store next door and bought him one.

The homeless man, named Eddie, was appreciative of the gifts. He also appreciated that the jacket had a hood to help keep his head warm.

“After we gave him the stuff he said ‘this is almost like Christmas because I didn’t get anything for Christmas this year.’ And I said ‘just think of it as a late Christmas present.'”


In his post, Ryan explained that he and his friends are not looking to get anything, but simply wanted to inspire others to be kind to those around them in order to make the world a better place for everyone.

“Just setting an example for everyone else. Be selfless and do good for others, then the world would be a better place for everyone. Felt the need to post this to inform others to do better, not to gain anything from it,” Ryan shared.

When we help the homeless, we often give some food, a few dollars, or some spare coins, but when we truly love the person we see before us, our heart compels us to do as much as we can to take care of this beautiful child of God who we see is struggling. This person who is someone’s brother, sister, son or daughter. This person who likely had a terribly difficult childhood which resulted in a difficult life. We not only give them a sandwich, but we also give them a large bottle of orange juice to make sure they are getting enough vitamin C. We not only give them a jacket, but also new socks, a new shirt, and a warm hat to make sure that they are as warm as can be. Compassion, kindness and generosity are expressions which come from a true love and understanding in the heart.

Watch this video of Eddie receiving his Jacket, You are Loved:

A post shared by Understanding Compassion (@understanding_compassion) on Oct 9, 2020 at 3:09am PDT