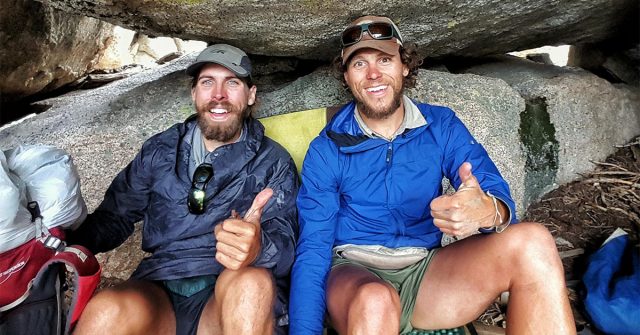 “When you work in the outdoors, you get to the point where you’re sleeping more outside than inside, and the outdoors becomes your home. And like any home, I wanted to keep it clean, so it became a habit.”
~Seth Orme

Two friends, Seth Orme, 26, and Paul Twedt, 30, have cleaned up and recycled just about everything you can find on trails and the side of the road; from bottles to cigarette butts and discarded mattresses, sometimes carrying them for more than 100 miles just to find a proper place to dispose of them.

Fueled by a love of the outdoors, these two compassionate young men decided to hike some of the most famous US trails between Mexico and Canada, over 2,600 miles, and to pick up every piece of trash that they saw along the way.

In 2015, Seth and Paul hiked the Appalachian Trail with their other friend Joe, and they were able to clean up over 1,100 pounds of garbage and recyclables during their four-and-a-half-month trek.

They made a new mission called “Packing It Out,” where they spent 5 months cleaning all trash seen from the Pacific Crest Trail at the border of Mexico up to British Columbia in Canada.

Seth has been a long-term lover of the outdoors, working previously as an outdoor guide and also as a kayak guide on Lake Superior.

“When I was 19 I kayaked all 2,500 miles of the Mississippi River, and that started me thinking that I wanted to invest more of my life in the outdoors,” Seth explains.

“When you work in the outdoors, you get to the point where you’re sleeping more outside than inside, and the outdoors becomes your home. And like any home, I wanted to keep it clean, so it became a habit.”

“It was a habit I wanted to share, and influence other people’s values. We don’t want to have trash all along our scenic trails. I thought, ‘How can I inspire people to pick up their trash?’ So I set the bar really high and decided to do something audacious, and hoped it might inspire people.”

These two compassionate friends are planning to take Packing It Out on journeys outside of the U.S. as well.

Several outdoor clothing and organic food companies fell in love with the duo’s passion for taking care of nature and decided to sponsor them, giving way to their next big 2,500 mile cross-country cleanup from Cumberland Island, Georgia, to the Olympic Peninsula in Washington State.

This time they’re planning to ride bikes while cleaning up the rivers and trails they travel on, and camping each night along the way.

“You sleep on the ground outside, either in the tent or we decide to do cowboy camping, where you just lay down on the ground and go to bed,” says Seth.

Seth and Paul meet numerous kind strangers along their scenic adventures, many of whom are inspired by their great work and invite them into their homes for free showers, warm meals and sometimes a place to stay the night.

Seth wanted to check and see if their efforts were making a difference, so he recently decided to go back and hike an area of the Appalachian Trail where he had found the most garbage. To his enjoyment, he found that the entire area was “significantly” cleaner.

Seth’s philosophy is that if someone arrives at an area that is super-clean, they’re less likely to litter there. “If you go to someone’s home and it’s really clean, you’re like, ‘I’m not going to throw trash on their floor.’ I hope people will start seeing the outdoors as less of a commodity and more of a community that we respect and value.”

Every scenic area could use a good team like Seth and Paul to help keep the outdoors clean, beautiful and magnificent. If you love nature, national parks, scenic areas and hiking, consider bringing a trash bag with you on your next walk or hike and pick up every piece of trash you see along the way. You’ll feel good about the service you’ve done, and the trees, plants, flowers and animals will also be grateful for it.

“If you truly love nature, you will find beauty everywhere.”
~Vincent van Gogh

See Also: 23 Quotes By Steve Irwin That Show His Deep Compassion Towards Life

Holocaust Survivors Warn Of The Rhetoric That Led To Genocide: ‘Never Let It Happen...