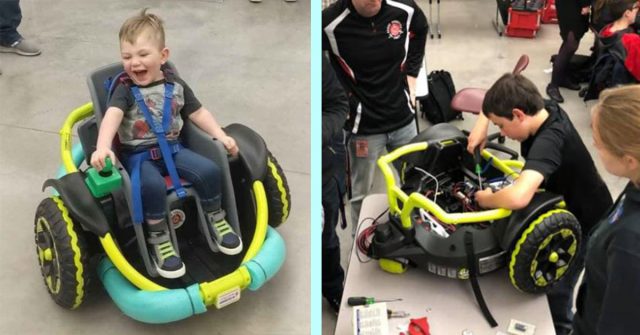 When a kind high school robotics team learned that 2-year-old Cillian Jackson was unable to walk due to a genetic condition, they built him a customized toy car, and now the adorable little boy is free and able to move around as he pleases.

It all began when Cillian’s parents, Krissy and Tyler, learned about a program from his physical therapist called Go Baby Go, which provides modified ride-on cars to young children with disabilities so they can move around independently.

His parents looked into it, but Go Baby Go did not have a chapter in their area, and the cost of other motorized wheelchairs were too expensive for them as insurance would not cover it. While thinking of other possible solutions, Tyler remembered that there was a robotics team at their local high school which had competed in different events. He reached out to the group’s coach, Spencer Elvebak, and asked them if they would be willing to take on the project to help his little boy.

Spencer asked his students what they thought and if they were interested and willing to spend their time helping 2-year-old Cillian.

“I brought it up to the kids at a meeting, ‘Is this something we want to step up and do?’” Spencer said. Without hesitation, the kind students all answered “Yes!”

“That’s the great part of my job, to work with these kind of kids,” he said.

The students began working on Cillian’s customized toy car and Go Baby Go provided them with a lot of support and technical assistance. Tyler and Krissy provided the students with a Power Wheels toy car to modify, and they took it apart and began wiring the controls. The original seat was too large, so they installed a comfy new seat for Cillian which has a five-point harness to keep him from falling out.

The original Power Wheels had two joysticks which moved the car forward and backwards, but the students custom designed and wrote their own code for a single workable joystick for a 2-year-old and inscribed Cillian’s name on it.

“In education in general we tell (students) we’re giving you the tools to apply in the future and do something with this,” Spencer said. “Here’s a perfect example of, ‘Wow, I do have the skills to wire, code, program and approach an engineering challenge.’”

The robotics team completed the customized toy car, and Cillian is now able to joyfully move around on his own.

Cillian’s parents reflected on how much the customized car is helping their baby boy.

“When he gets in his car, he will consciously stop and look at a doorknob or a light switch or all of these things he’s never had time to explore,” his dad explained.

“It really helped his discovery and curiosity. Having the car has really given him the agency to make choices on his own,” his mom added.

Krissy was thrilled for her baby boy and also so grateful to the kind high-schoolers.

“When he’s been trialing his electric wheelchair… to see him finally going for the first time and being independent, that was incredible. And to see all the kids around him, cheering him on, and being so happy with what they did—it was amazing,” Krissy said.

“These kids took time out of their busy schedules to do this for our son. We’re so grateful. This really helps him explore like he’s never been able to do before.”


Farmington High freshman Alex Treakle, who helped work on the main wiring of the car, shared he was happy that he could help someone.

“I decided to get involved with the project because… I wanted to help someone, and it felt really good in the end,” Alex said.

When Alex saw Cillian riding in his modified car for the first time, he was deeply moved.

“The joy on his face really made my entire year,” he said. 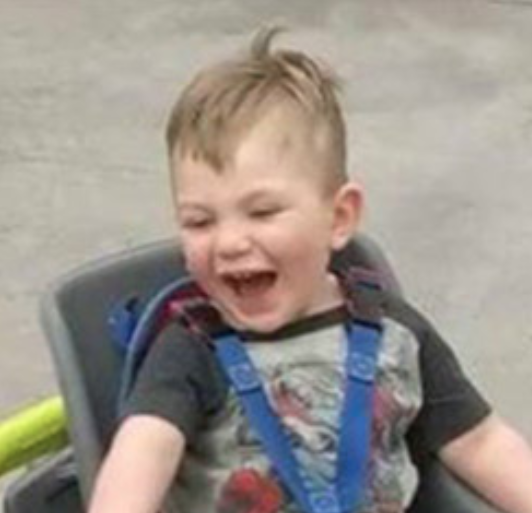 Another member of the robotics team, Drew Eisenzimmer, was proud to be working on something that was helping a disabled child have an easier life.

Nicole Cash, a robotics team student who also helped in the design on the car, felt more value in helping this child than she had in competing in previous competitions.

“I think we won here more than we do in our competitions,” she shared.

Not only did the kind students partake in and learn a great lesson of compassion, but now life is now a lot easier and happier for a family doing their best to take care of their child.

Find The Odd One Out In 30 Seconds!