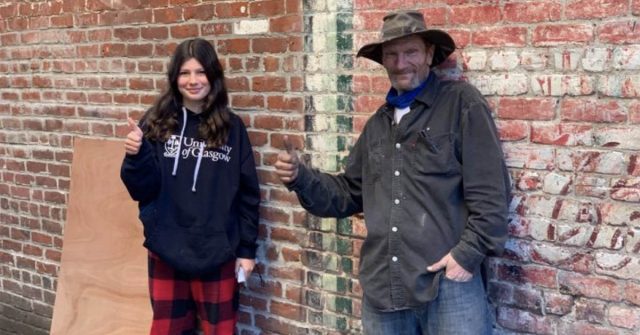 When a homeless man decided to return a grandmother’s full wallet he found while digging through a dumpster for food, the elderly woman’s granddaughter helped raise more than $50,000 to help him get a permanent place to live.

The homeless man, Sean Currey, was behind a coffee shop looking for something to eat inside of a dumpster when he spotted a wallet on the ground of the parking lot full of cash and credit cards. The wallet belonged to 80-year-old Evelyn Topper of San Rafael, California, and she had lost it earlier while taking her 12-year-old granddaughter out for a coffee.

“I tore apart my car and my house [searching for it],” explained Evelyn. “I knew it must have dropped somewhere… In this little wallet was everything. Every credit, debit, medicare card. Everything I own. I was distraught.”

Even though Sean was homeless and desperately hungry, he decided against using the money and cards in the wallet and instead contacted 80-year-old Evelyn to let her know her wallet had been found.

“Anybody in the position of being homeless and cold and tired and hungry, if they found a credit card, they’re going to think about [using] it,” Sean, 57, admitted. “But whether you’re going to act on it is two different things.”

“I would rather be cold and hungry and know that I did the right thing,” he explained.


Sean used a phone and called the number he found inside of the wallet, and after speaking with Evelyn, she was so relieved.

“I started screaming,” Evelyn recalled. “I couldn’t believe it.”

When later asked why he would return the wallet when he himself was nearly starving, Sean simply replied;

After learning that Sean, a man who had been homeless for five years, had returned her grandmother’s wallet, 12-year-old Mikayla Gounard wanted to do something special to thank him. With her birthday coming up, she was already planning to have a drive-by birthday party where her friends would help donate to a charity of her choice, so Mikayla decided that she wanted to use the funds for this kind and honest homeless man who had helped her grandmother.

By the end of her birthday, Mikayla was able to raise $475 for Sean, and together with her mother, personally dropped the money off to him in a parking lot.

“I got to see him smile, and it made me really happy,” Mikayla said.

Sean was deeply moved by the thoughtfulness and extent that a 12-year-old girl went to help him.

“I was just so touched. It was refreshing, knowing that people her age want to help,” Sean said. “I felt very humbled and special that they would go out of their way to do that for me.”

But Mikayla wanted to do more to help Sean, and her family’s friends were also asking what else they could do for this sweet homeless man. Mikayla and her mom, Vanessa, decided to setup a GoFundMe to allow everyone to make further donations with the goal of helping Sean get “off of the streets and into a temporary housing situation that keeps him safe and warm.”

“This is Mikayla, my 12 year-old daughter – and Sean, a homeless gentleman who found her grandmother’s wallet in a dumpster and returned it with everything in it,” the GoFundMe reads. “An unlikely pair, whose lives became intertwined from one act of honesty and another of generosity. What began with a lost wallet, progressed into Mikayla’s drive-by birthday fundraiser, and has now seeded a friendship with the entire family.”

“How can you help?
In the short-term, we would like to get Sean off of the streets and into a temporary housing situation that keeps him safe and warm. He is currently on the waiting list to receive one of the fifty (50) coveted Marin County Section 8 Housing Choice Vouchers which will assist him with a more permanent solution.”

Sean also had plans to build a row of tiny houses for himself and some other homeless people in the area who he knew were really struggling.

“In the long-term, with your assistance, we would like to partner with Sean to create a sustainable row of tiny houses for the San Rafael homeless community at large, using his design and construction experience.”

“This isn’t about charity. It’s about Compassion, the highest form of LOVE.”

“Please share far and wide so that we may collectively be a part of the solution to end homelessness. Let’s learn from our children to plant a seed and watch it grow…”

Within weeks, more than $50,000 was raised for Sean by donations from kind people from around the world. Mikayla and her mom helped Sean open a bank account, and together they deposited the money into his account.

“After 2+ weeks of waiting for your generous donations to be released, Sean opened a bank account, received, endorsed and deposited the funds! All of the thank yous in the world cannot convey the gratitude that we all feel towards you, our GoFundMe community. With our short-term goal complete of getting Sean off the streets and back onto his feet, we are now collectively envisioning the best way to assist his friends and our local homeless community to help design, build and take pride in their own sustainable housing.”

Sean has since been living in a comfortable local hotel room which has a kitchen and a hot shower while he looks to purchase a camper trailer to call home in the short-term while he begins building tiny houses to house the homeless using his previous construction experience.

Sean has thanked everyone deeply from his heart, and says that he “feels very blessed.”

“Who knew that returning a wallet to someone I didn’t know would turn into something that is gonna spark something really good?” Sean said.

“I believe I have a good heart. Maybe, if I keep doing the right thing, more people will too, and it will change the world, in a small way, for the better.”

Watch this video of Mikayla giving Sean his donations. You are Loved: