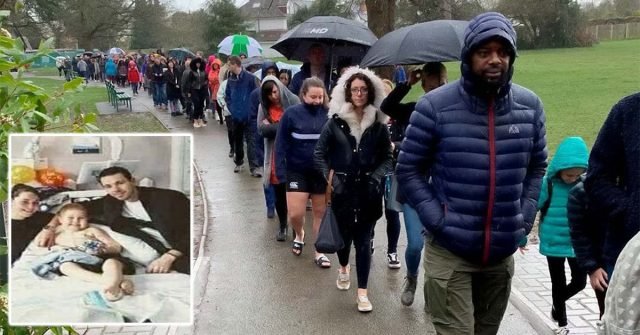 More than 5,000 people queued for hours in the rain at a swabbing event in Worcester to see if they were a match for a five-year-old boy who needed a lifesaving transplant.

Five-year-old Oscar Saxelby-Lee has a rare form of cancer, T-cell acute lymphoblastic leukemia, and quickly needed a perfectly matched stem cell transplant in order to survive. Having had several unsuccessful rounds of chemotherapy, one was able to have an effect and doctors told Oscar’s parents that a stem cell donor was needed quickly.

Oscar’s parents, Olivia and Jamie, both tried to be donors but were not perfect matches for their son. Olivia, who is 23, has been pushed to her limits emotionally but is doing her best to stay strong in order to project confidence onto little Oscar.

“Only once has Oscar said: ‘I don’t want to be in hospital because I’ll die.’ It was the hardest moment of my life. I had tears in my eyes, but I had to pull myself together. I said: ‘Of course you won’t. And when you’re better, we’ll go on a camping holiday.'” Olivia said.

After learning about Oscar’s dire situation, his school, Pitmason Primary, stepped in and made a call to the community asking for help.

“That wonderful school should get an award,” Olivia explained. “They arranged an astonishing event in which 5,000 people queued uncomplainingly in the rain to have a cheek swab taken.”

More than 5,000 donors came from neighboring towns to see if they were a match to help save Oscar’s life. Even though it rained all day, everyone continued to stay in line for Oscar’s sake. One would-be donor was Christine Smith, who decided to volunteer because a young man had saved her life years earlier by donating his bone marrow to her.

“I’ve had a wonderful life, and lived to see my grandchildren grow up, thanks to the kindness of a stranger,” Christine said.

Oscar’s mother was so deeply grateful for the kindness of her community, and a perfect match was able to be found.

“I was overwhelmed when I went to the school. There was a huge photo of Oscar’s face and it just broke me. The words wouldn’t come out and I burst into tears. I blew kisses to everyone instead,” Olivia said.

“I want to say a huge “thank you” to everyone who took part. We were so humbled by the response. There were masses of people — an inspirational army. It’s so heart-warming to know that every one of them wants to help our little boy and the many others in a similar position. Lots have shared Oscar’s story, encouraging others to join the register, too. We just can’t thank people enough for their generosity and love.”

Oscar’s condition has greatly improved, and it’s looking like he will be able to return home soon.

If Your Partner Does These 11 Things With You, Do Not Let Them Go