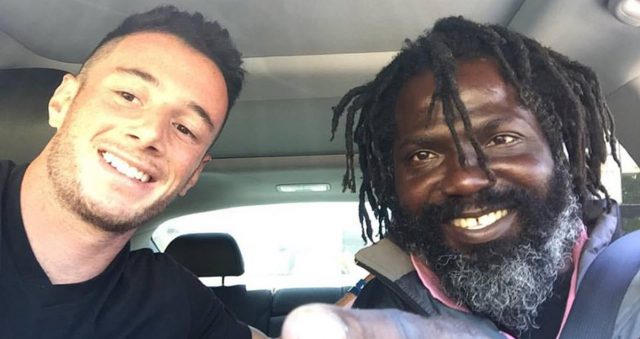 After seeing Tarec Atkinson several times on the street and wanting to do something to help him, Adam decided one day to invite him to lunch. Tarec gratefully accepted, and while at lunch, Adam was able to hear about his life story.

Tarec was born in Jamacia, and after a less than easy life he decided to move to the U.S. around eight years ago. He spends around 90% of his time alone, and in the past year he had been living in a tent by the highway in California.

“Tarec goes days without eating, sometimes living off of the berries he picks, he spends 90 percent of his time alone and has no friends and no family in the states,” Adam wrote.

Adam’s compassionate heart opened for Tarec. He invited him to lunch.

“I’ve seen this guy at Starbucks in Marin City several times. Every time I saw him I’d tell myself that I would take him to lunch but always found an excuse not to. Today was different. It might have been selfish but I was lonely. I didn’t want to spend the whole day alone so I asked him if he was hungry and if he wanted to go to Subway with me.”

Tarec has not had an easy life, and has been homeless for the past year, living in a tent next to the highway.

“Tarec Atkinson was born and raised in Jamaica. When he was a kid, he dreamt of being a famous soccer player. He was recruited to play at school but never got the opportunity because of some trouble he got in as a teenager.”

“He moved to the states 8 years ago and has spent the last 12 months living in a tent by the side of the freeway. Tarec goes days without eating, sometimes living off of the berries he picks, he spends 90% of his time alone, and has no friends and no family in the states.”

Adam was heartbroken when he learned that Tarec hadn’t even been able to shower for more than a month, so offered to let him use his shower.

“After hearing it had been a month since he showered, I brought him back to my apartment so he could enjoy a hot shower. Because of all these hardships, trying to get a job is impossible. How can you fill out an application when you haven’t eaten in days?”

Adam told Tarec that he would drive him around town next week to help him find a job to help him get back on his feet. Tarec agreed, and when they met, Adam got him a nice dress shirt, some slacks, and brought him to use a computer at the local library to fill out job applications online.

“I told Tarec that I would drive around with him next week and help him fill out applications and even speak on his behalf to help him land a job so he can get back on his feet.”

“Like we all are, Tarec is searching for a purpose in life. He yearns for happiness. He craves for a woman to love and to feel the love from a woman. He wants to create a better life for himself so he could one day have a family and stability. He is just like you and I.”

While helping Tarec, Adam realized how difficult it is for a homeless person to even apply for a job without help.

“And let me tell you something, we take our computer literacy for granted. Watching him struggle to fill out an application put so much into perspective for me… I saw firsthand how the ‘system’ is set up to fail people like Tarec. There is no way he would have been able to do any of this without my help.”

After a week of helping Tarec, they were able to get him an in person interview at Safeway, and Tarec got the job.

“After a week of phone interviews Tarec landed an in person interview at Safeway. I remember driving to Safeway being nervous. I looked over to him and asked how he was feeling. He looked back at me and said “I got this”. I believed him. I dropped him off, wished him luck and waited.”

“20 minutes later, I see him walk out of Safeway with a big smile and a thumbs up. I let out a Rick Flair sounding “WOO!”. We had accomplished a lot together in two weeks. It was an incredible moment.”

“My hope in sharing this story is that it will inspire others to spread LOVE. We all need help in one way or another. Sometimes all someone needs is a friend. Thank you for taking the time to read my story. #lifeishardbenicetopeople #love”

Empathy is about finding echoes of another person in yourself.

If you see someone in your area who you think you can help with a few small things, be the love to light their way this week.

To my family and friends: just want to say thank you for being in...

Fun Quiz: How Fast Can You Find The Odd One In All 5 Pictures?