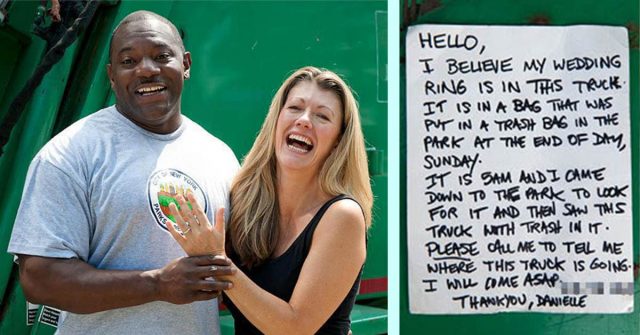 When Danielle Hatherley Carroll accidentally threw away her wedding ring, a kind city worker went through all of the trash at the garbage dump to eventually find and return her ring.

Danielle was teaching an outdoor painting class in Battery Park, New York, when she unknowingly lost her wedding ring.

“I’m a painter who takes people on outdoor painting adventures around New York City,” Danielle said. “I was teaching a painting class in Battery Park all day.”

As paint often gets on the hands of painters, Danielle and her class were regularly cleaning their hands with rags and a “slippery hand cleaner.” At the end of class they dumped their rags into a clear garbage bag and put it in the city trashcan, and Danielle didn’t notice that her ring went in the bag as well.

“I was so busy that day and cleaning my hands constantly that I didn’t notice I had lost the ring,” she said.

It wasn’t until 3:30am the next morning that Danielle woke up and realized that her gold wedding ring, which is fitted with nine diamonds, was gone.

“I didn’t want my husband to get upset with me, so I was going to sneak out and find a police officer to help me look,” she said. “But he awoke and said, ‘You’re out of your mind. I’m coming along to help you.’”

Danielle and her husband Steve headed to Battery Park, but when they got to the trash can she’d used, they found that it had already been emptied.

“Sure enough, it had been emptied,” she said.

Danielle was on the verge of tears when her husband noticed a city parks department trash truck near the park.

“I said, ‘I’ll bet you anything it’s in there,’” she said. “We walked over and nobody was inside. So I wrote a note.”

The note reads, “Hello, I believe my wedding ring is in this truck. It is in a bag that was put in a trash bag in the park at the end of the day, Sunday. It is 5am and I came down to the park to look for it and then saw this truck with trash in it. Please call me to tell me where this truck is going. I will come ASAP. Thank you, Danielle.”

She put the note under the windshield wipers and went home hoping that she’d hear a response.

When city worker Gary Gaddist came to the truck the next day, he found the note and was touched.

“I found this note and it was great, just so honest,” Gary, a 42-year-old Brooklyn dad said. “So I called and she explained everything, about how she lost the ring, and how she couldn’t sleep after realizing it was gone.”

Gary said that the truck had already been emptied at the dump, that the public was not allowed to search there, and that it would be “iffy” to be able to find it in such a large amount of trash, but that he would go and look for it.

“I had to go to Randalls Island, and when I got there I showed the guys the note,” Gary said. “They said, ‘If you want to look for a needle in a haystack, go ahead.’”

Gary had collected thousands of pounds of garbage inside of hundreds of bags the previous day, and looking for a ring within all of it was truly a monumental task.

“It really was like looking for a needle in a haystack,” he said.

After going through a mountain of garbage, Gary was able to find the bag that had a clear plastic bag inside, and sure enough, inside was Danielle’s wedding ring.

“Luckily, it didn’t take me long to find the one with the clear plastic garbage bag inside,” Gary said. “I took a shot and it was there.”

He called Danielle and Steve with the good news, and she cried tears of relief and joy.

“I was ecstatic, I started to cry,” Danielle said. “I hopped in a cab and raced down to meet him.”

Danielle was overjoyed when she met Gary and as he returned her lost wedding ring to her.

When later asked why Gary went to such lengths to look for a “needle in a haystack” for a stranger, he said, “it was a love thing.”

“She sounded like a nice person, and I could tell she and her husband love each other,” Gary said. “I’m glad I could help.”

He Visited His Biggest Fans In The Hospital, And Their Reaction Will Melt Your...