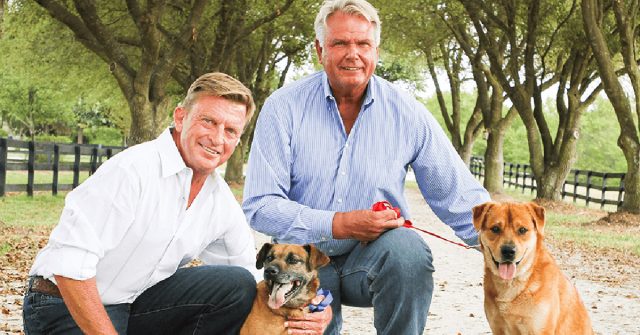 While more than 6.5 million animals enter shelters in the U.S. each year, only 2.5 million are adopted and able to live the rest of their lives with a loving family. The others are unable to find homes, and when animal shelters become overcrowded, the 4 million unadopted pets are heartbreakingly euthanized and put to sleep each year.

Danny Robertshaw and Ron Danta love dogs, and after they learned the tragic truth about what is happening to so many lovable dogs who don’t make it out of shelters, they decided to do all they could to make a difference. They converted their home and ranch into Danny and Ron’s Rescue; a safe haven for abused, abandoned and unadoptable dogs.

They believe that abused or neglected dogs can only recover and learn to trust again when they are in a loving home, as Danny and Ron both personally care for injured and abused animals until they are ready for adoption.

They currently have 71 dogs living under their roof, many of which were moments away from being put to sleep, and together they have saved more than 11,000 dogs.

“I never dreamed we would have a rescue this size that has taken over, you know, our whole lives. We have 71 dogs in the house currently, and I don’t really know of any other rescues that just let dogs live in their house like we do,” Ron said.

Danny shared that, “Most people who rescue dogs have kennels separate from their houses, but we’ve saved so many animals that have been victimized, or injured. And we don’t always know what we’re getting into with that. And that’s why living with them sometimes is so important because we really find out what we need to know before they get adopted by someone.”

Their rescue website explains how they got started and describes their journey in helping so many lovable pups;

“We began our rescue mission in 2005 after Hurricane Katrina by aiding dogs that were left homeless by the storm. Since then, our outreach has grown to heights we never imagined. Now we are rescuing puppy mill dogs, bait dogs used in dog-fighting, and hundreds of dogs from shelters—often moments away from euthanasia. We currently deliver pet food and supplies to more than 48 elderly people living in poverty—and pay for their dogs’ medical bills, too. We have rescued dogs from junkyards and shelters, freed animals chained to trees and living in small cages, and saved abandoned pets living on the streets.”

Danny and Ron get weekly lists from shelters of dogs which haven’t been able to be adopted, and who need to be saved.

Cotton is one of the beloved permanent residents at Danny and Ron’s Rescue. Cotton had a difficult past, and Danny doesn’t think Cotton could handle another big life change of moving homes, so they’ve decided to personally adopt him. Danny shared the story of how they first met Cotton, and how he went from frightened pup to loving rescue dog:

“He was taken to the shelter, one day when Ron was there, with a diaper wrapped around him, and truthfully the lady said, ‘I wanna get rid of this damn dog and I don’t want no more worms on my porch.’ And… um… she wanted him put to sleep. He was totally frightened… and… he didn’t want to eat for days, and when he’d go out in the yard it would take three or four of us just to keep walking around, walking around to get him to come in the house. And now he’s friends with everybody. And out in the yard now, he comes to you. And that’s one of the biggest secrets about so many of these scared ones; you just give them the time and then they come to you, and tell you their terms of life. You try to merger the two, and see if you can get somewhere.”

A heart-warming documentary was recently filmed featuring the story of Danny and Ron’s rescue called Life in the Doghouse, where we get to meet the lovable dogs they’ve saved, and get to learn about their inspiring and unique approach to dog rescue.

Ellen DeGeneres loved the movie so much that she posted about it online in the following post:

I just watched “Life in the Doghouse” on @Netflix. What this couple has done for rescue dogs is incredible. Go watch it, and then if you’re like me, you're gonna wanna support them. #HappyPride @DannyRonsRescue https://t.co/0FqjAKjiM9

Her post reads: “I just watched “Life in the Doghouse” on @Netflix. What this couple has done for rescue dogs is incredible. Go watch it, and then if you’re like me, you’re gonna wanna support them. #HappyPride @DannyRonsRescue https://dannyronsrescue.org/donate“

Danny and Ron are doing a beautiful job rescuing thousands of lovable dogs and helping them be able to find their forever homes. If you feel inspired, you can support their cause by donating here.

Watch the trailer for Danny and Ron’s incredible documentary; Life in the Doghouse:

A post shared by Understanding Compassion (@understanding_compassion) on Aug 30, 2019 at 9:34pm PDT

Kind Hairstylist Spent 8 Hours Combing The Dreads Out Of Woman With Severe Depression’s...

Thank You Dr. Fauci For Guiding Us And Helping Us Stay Safe…