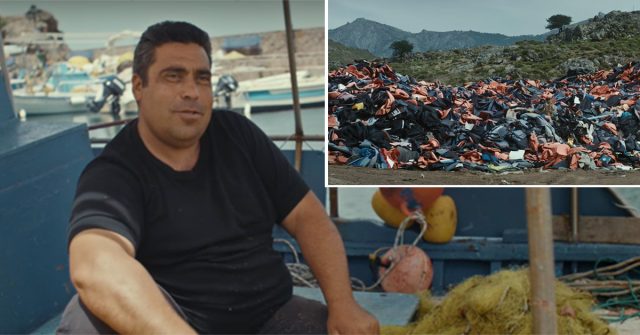 The 153 Greek villagers of the poor fishing town of Lesvos didn’t have much money or many possessions, but after witnessing the hundreds of thousands of people escaping the Syrian bombings, their compassionate hearts did everything they could to help them.

These heroic villagers put their lives on hold and spent several years helping men, women and children off of half-sunken boats, and nursing the many sick and severely traumatized and stressed individuals back to health.

In Ode To Lesvos, a new documentary short made by Syrian refugee filmmaker Talal Derki, the island residents give their own testimonies on the importance of compassion and kindness.

More than 900,000 Syrians landed on one of the six islands surrounding the Aegean Sea, including Lesvos. The incredible compassion shown by the islanders even led to their nomination to win the Nobel Peace Prize.

The war in Syria, as with with the wars in Iraq and Afghanistan, resulted in a 90% civilian casualty rate, meaning that the real victims of the war are the innocent men, women and children who live in the cities where the wars are taking place. Desperate to escape the unpredictable bombs dropped by airplanes and terrors of war, millions of Syrians took their families and made a long and difficult journey towards Europe.

“While thousands have sought refuge from my war-torn homeland, something extraordinary has been taking place on this Greek island,” filmmaker Talal said.

“Even though Greece is in the middle of its own economic crisis and craziness, there are people with an unbreakable generosity of spirit who provided hope and positivity to the displaced families. They made me feel so much more optimistic about life.”

The following video, which shows real interviews with the people of Lesvos, tells the inspiring story of what your compassionate brothers and sisters have been doing during the past few years to help those who are severely in need.

“We were fishing for people instead of fish,” one of the villagers said.

“I saved the lives of some refugees, and you know what they did? All the people in the boat? They stood all their children in a line, and each one came up and hugged and kissed me. That’s the Nobel Prize,” one villager said.

If you want to help the refugees in Syria, you can volunteer or donate to the International Rescue Committee here.

The International Rescue Committee works globally and has been providing critical humanitarian aid to Syrians since 2012. They provide services from cash vouchers for Syrians to purchase food, legal assistance, employment, and education.

“Carry out a random act of kindness, with no expectation of reward, safe in the knowledge that one day someone might do the same for you.” ~Princess Diana.

See Also: This Kind Hero Saved 669 Children During The Holocaust, And Has No Idea They Are Sitting Next To Him, Watch His Reaction

A post shared by Understanding Compassion (@understanding_compassion) on Oct 3, 2018 at 11:01am PDT