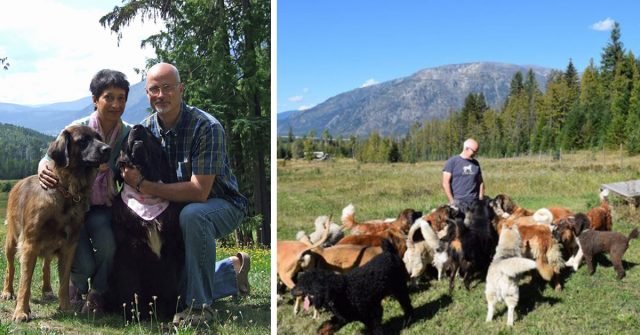 Adopting a dog from a shelter is a wonderful thing to do. Shelter dogs are lovable pups whose original owners often had a difficult time taking care of them, and so decided that the best thing was to give them up for adoption. This can be a very stressful experience for a dog, as they are deeply loyal and love their owners like family. Shelter dogs also tend to be beyond their puppy years, which decreases their chances of finding someone to adopt them. Many shelter dogs were also previously homeless or abandoned.

When Mark and Sharon Starmer discovered just how sad and lonely the life of a shelter dog is, they couldn’t help but to start adopting as many as they could. They currently have an amazing 45 shelters dogs and 1 grey wolf, and you can tell by the pup’s big smiles that they are happy as can be.

All of their dogs were rescues and in desperate need of love and a home, as they were regularly rejected by potential adopters due to their age or existing illnesses.

This compassionate Canadian couple began adopting in 2004 when they adopted their first shelter dog. Since then, their hearts have been drawn to find the dogs which no one wants to adopt, and then giving them a wonderful and loving home to call their own.

“All of our dogs live indoors with us and we have no cages, pens or runs,” Mark said. “They do kind of wreck the house and the dust is awful, but they’re all fully fledged family members and we wouldn’t have it any other way.”

While others have judged them as being a little unusual for owning so many dogs, the couple has stayed true to their belief that what matters most is that the once lonely and forgotten dogs are loved, cared for and happy beyond measure.

In the past, the couple and their son were forced to move out of their home in Alberta after authorities notified them that they had too many dogs.

“We weren’t aware of any restrictions on how many dogs we could have,” Mark said. “‘We were told that either the dogs had to go or we did. There was no contest.”

After thee years of searching, the couple was able to find a home that included a four-acre enclosure where their dogs could roam freely.

Taking care of so many dogs is more expensive than most people realize. The combination of vet bills for the dogs with previous conditions, as well as buying enough food to feed them all, can be difficult to say the least, but Mark and Sharon’s hearts are always up for the challenge.

“Caring for 46 dogs is unimaginably expensive. Sometimes it’s a case of buying food for the dogs or for us, but it will always be them. We only get by because of the wonderful support from our food supplier and friends,” Mark said.

The couple has had to let go of a few luxuries in order to care for their 46 furry friends, as they choose not to take holidays away from home because they don’t want to be far from their pack.

“We never take holidays or go away now because we simply can’t leave the dogs,’ says Mark. ‘We miss them and they miss us.”

The couple is still eager and willing to adopt more dogs in need of a home, but they are now focusing on new ways to help the thousands of other abandoned shelter dogs to be able to find their forever homes with owners across North America. Recently, Mark himself drove 3,000 miles roundtrip to Albuquerque, New Mexico in order to deliver one dog to his new family.

“As far as I’m concerned, when it comes to dogs, the end of the earth isn’t too far to go,” he said.

This video shows their happy dogs running into their 4-acre enclosure at home, their smiling faces say it all:

If you are looking to get a furry companion, consider adopting a shelter dog rather than buying a puppy from a pet store or a puppy mill. There are so many lovable dogs that need and deserve a chance at having a life where they are loved and taken care of. Thanks to Mark and Sharon, we can see how rewarding it can be.

See Also: Puppy Drags Her New Blanket Outside To Share With A Cold Homeless Dog

Here’s What You Need In Your Ideal Partner, Based On Your Zodiac Sign

Mom… could you come back and stay a while…