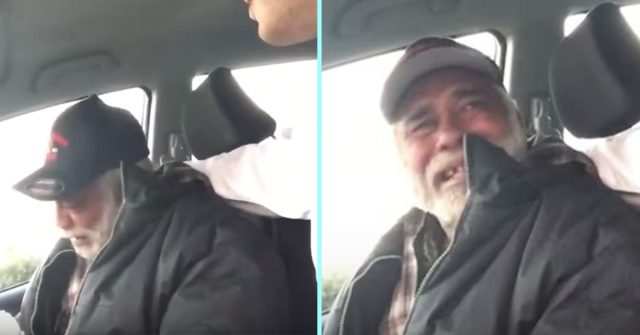 When a homeless veteran who hadn’t eaten for more than a day was asking for spare change at a gas station, one kind stranger invited him out for lunch, and has agreed to buy him lunch each day, offered him a job, and fundraised more than $20,000 to help him.

Max Zahir saw the homeless veteran, Robert, at a gas station in Redlands, California. He was asking for spare change for food, so Max invited him to join him for lunch at a nearby burger drive-thru.

While they were ordering food, the homeless vet was very grateful, and Max was moved to help him more.

“I’ll tell you this, I go to work every day around 4 o’clock okay, and if you meet me at that gas station, I’m gonna buy you lunch or dinner,” Max said.

“I just wanna do something, and maybe one day you’ll get to your feet, and just pay it forward. And just… stay positive okay….You take care alright… just stay hopeful,” he adds.

They shook hands several times and agreed to meet each day at 4 o’clock.

“Give me a hug man…” Max says before Robert left his car. It’s then that his grateful passenger felt overwhelmed from being shown so much love, and he began weeping as they hugged.

“You served this country, and you deserve better,” Max replied.

Max wanted to inspire others to help homeless veterans, so he uploaded the clip of him sharing a meal with the homeless man and it went viral online. He’s since then been inspired to raise money to purchase sleeping bags, blankets and food for homeless veterans during the cold months of winter. Max also offered to give Robert a job at his restaurant.

“Today I met this homeless war veteran named Robert at the gas station. He approached me and asked me for change. I said what do you need the change for ?? He said he hasn’t eaten since yesterday. So I told him to hop in the car and let me buy you food. Take a look at the video. The idea behind this video is to raise awareness for our homeless veterans,” Max shared with the clip.

The homeless veteran non-profit Carry Me Productions also reached out to Max and offered to provide housing for Robert. “Please contact us. We can get him a home!” posted CEO Carrie Nowocin on the fundraising page.

The U.S. Department of Housing and Urban Development states that on any given night, there are roughly 49,933 armed service veterans that are homeless and sleeping on the streets. Many of these veterans faced traumatizing experiences while overseas, and have been left with PTSD; a mental health condition that’s triggered by a terrifying event — either experiencing it or witnessing it. Symptoms may include flashbacks, nightmares and severe anxiety, as well as uncontrollable thoughts about the event. Having PTSD makes it very difficult for people to live regular lives.

Max is right when he says our homeless deserve better, and thanks to his inspiring act of kindness, Robert and many other homeless veterans will be better taken care of.

Watch the following video clip of Max first sharing a meal with Robert:

An Hour On This Bicycle Will Give Your Entire House Enough Power For 24...