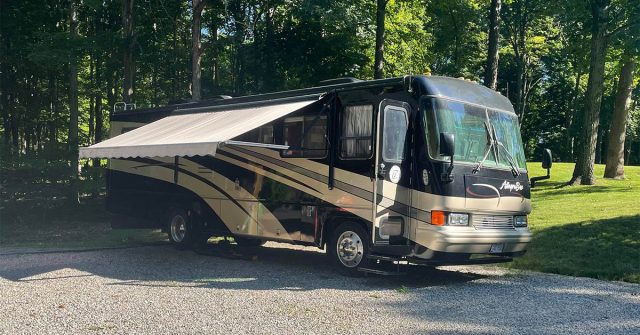 When a kind couple decided that keeping their word on an agreed upon price for a motorhome was worth more than receiving double the amount, they later learned that it had given the buyer a reason to continue living.

Cheri and her husband had decided to sell their beloved motorhome as they would soon be moving into a senior living community. The motorhome had first belonged to Cheri’s parents, and while unused for years, its sentimental value made it difficult to part with.

“My husband and I owned a 35 foot class A motorhome that we bought from my parents when they could no longer travel,” Cheri shared. “My parents loved that motorhome and I had a big sentimental attachment to it. We ended up buying a place in a 55 and older community in Florida and realized we were no longer going to use the motorhome. The sentimental part of it made me keep it for three years but we weren’t using it and I didn’t want it to just melt into the ground.”


They listed the motorhome for $20,000, but only a few potential buyers replied.

“My husband advertised it for $20,000 [and] wasn’t getting too many bites. A man from Tennessee called about it and we agreed to sell it to him for $15,000. When he came to look at it, he loved it, but the check engine light was on so he decided not to buy it.”

Cheri and her husband discussed the situation and agreed to offer to sell it to the man from Tennessee for $10,000.

“After he left, my husband and I agreed that we would try to sell it for $10,000. My husband called the man and told him that we would take $10,000 for it and wanted him to have the first opportunity to buy it for that price. He agreed that he would buy it for that price if we took it to a garage and corrected the check engine light issue. He was so excited about it! Meanwhile my husband had not changed the price on the site where we were selling it.”

“Shortly after the man from Tennessee agreed to buy it, we got a cash in hand offer for $20,000 from someone else. We told him that someone was coming to pick it up on Tuesday, and if they did not show up we would sell it to him. My husband and I joked about telling the guy from Tennessee that the check engine light had not been resolved but we were in total agreement that we would sell it for $10,000 because we gave our word to the first man. It wasn’t worth the $10,000 we were losing to lie and disappoint the man we had promised it to. We took the motorhome to the garage and they said everything looked great but for some reason the check engine light stayed on. The guy from Tennessee decided to buy it anyway and came to pick it up a few days later.”

After selling the motorhome to the man for half price, he shared with the couple that he had been debating whether or not to pursue chemotherapy for his cancer. In other words, he had been debating whether to continue living or not. But because he had been able to buy their motorhome, he would now pursue going through the chemo treatments in order to survive and to be able to enjoy traveling in his new motorhome. Cheri and her husband then knew that they had made the right decision.

“When he pulled up to pick it up, he told my husband, “Now I can tell you my big secret.” He said, “I have cancer and I wasn’t going to try to fight it and take chemo but getting this motorhome has really given me a reason to live and now I’m going to get the chemo and live as long as I can so I can travel in this motorhome with my wife.” This brought my husband to tears, and he’s not a guy who cries easily LOL. We never even considered taking the higher offer from the other person, but we were so glad we weren’t the kind of people who would do that because now the motorhome was actually giving a person a reason to live. I had cried about having to sell that motorhome because of how much it meant to my parents, but now I was nothing but happy for him to have it, and was not sad when I saw it drive down the driveway. The man said that we were doing God’s work and he felt like God had a hand in bringing us together. I believe that is true ❤️”

After Hearing A Bully Dropped Boy’s Shoes In The Toilet, Kind Classmate Brought Him...

His Mom Said He Could Adopt A Puppy Or Cat; He Chose This 10-Yr-Old...