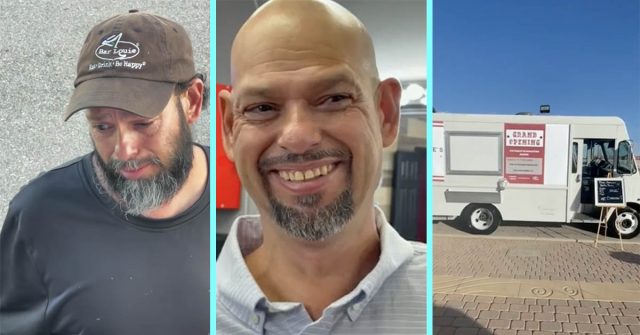 After learning that a homeless man’s dream was to have his own food truck, a kind man and his social media followers donated to help make his dream a reality.

Charlie Jabaley, who runs the nonprofit The Dream Machine Foundation, was in a Walmart parking lot in Colorado Springs when he happened to have a friendly chat with a homeless man living in his van, Tony Rojas. Charlie and his foundation were on a 45 day tour in the U.S., where with the help of generous donations from his followers and corporations, he sets out to make dreams come true for those in need who he encounters on his journey.

Charlie learned that Tony is a chef, and that he had become homeless during the pandemic and was living out of his van.

“We started talking to him [in the Walmart parking lot],” Charlie said, “and when I saw his eyes, or just like, saw his purity, is when he told me his dream. I was just like, ‘Okay, we got to help this guy,'”

Charlie and Tony shared a conversation in the parking lot, and Charlie asked him what his dream was.

“To have a food truck. I just want to cook for people,” Tony said.

“Where you staying right now?”

Charlie asked Tony if he would be willing to cook for him and his friends that night if they bought the ingredients.

“Would you be able to cook tonight?” Charlie asked.

Tony agreed to cook them his speciality that night: nacho tacos. They went to the grocery store together and picked up the ingredients Tony needed, and afterwards went to where they were staying and Tony prepared his tacos for them.

Everyone really enjoyed the meal and told Charlie how delicious his nacho tacos were.

The next day Charlie drove over to Tony’s van and let him know that they wanted to help him and had booked him an appointment to get a haircut and some news clothes.

“We set up an appointment to get your hair done, and we’re also going to take you shopping,” Charlie said.

Tony got a wonderful haircut, shave, a new set of clothes, and left feeling great.

“I feel great,” Tony said. “I feel myself for the first time, in a long time.”

But that wasn’t the end of the blessings in store for Tony. It was just the beginning.

Charlie shared a video of Tony online and asked for donations to make his food truck dream become a reality. Shortly after, they were able to raise enough from kind hearts around the world to help this struggling homeless man.

Charlie drove up to see Tony at his van again and asked him to come on an adventure.

“We got a little surprise for you,” Charlie said.

Charlie and his friends had purchased a $40,000 food truck to gift to Tony. They drove to another parking lot together, and showed Tony his dream come true.

“This forty thousand dollar food truck is yours,” Charlie told Tony while his arm was around his shoulder.

As they took a tour inside of the food truck, Tony couldn’t hold back his tears of gratitude, and his genuine, beautiful smile.

“For all of you that watched my video… thank you for making me happy,” he said to the kind hearts who had helped fundraise for him.

Charlie realized that even while he had helped Tony to realize his dream, that he was still homeless and living out of a van, so he organized a public event to help raise donations for Tony which would cover housing and help pay all of the business fees needed to setup his food truck business. Hundreds of people attended and were able to eat Tony’s delicious nacho tacos, prepared by Tony himself inside of his food truck. Altogether with the event and previous fundraising, they were able to raise more than $100,000 to help Tony.

“Our goal is to get to 100,000 so that he could afford, you know, he could afford startup costs for his business, he can afford to hire an employee, licenses, all the things it takes to start a business,” Charlie explained.

“So today we started searching, talking to landlords to rent, you know, he’ll be able to pay it off for the year, but we got to find the right landlord who understands, you know, just gotta find the right fit for him.”

“Even though his dream was to have a food truck, as a foundation, we try to set everybody up for success, not just for that moment or for that video of his dream coming true, but for him to be successful for the rest of his life.”

Charlie believes that everyone can also see the same thing he recognized when he first met Tony: that he is a special and valuable human being.

“Sometimes when you meet somebody, you just know they’re special. And I think the whole world is kind of like seeing the same thing I saw,” Charlie said.

This Kind Chef Has Provided More Than 1,000,000 Free Warm Meals To Hurricane Victims

Kind Young Man Gives 3 Bags Of Clothes To Bullied Classmate Who Wore The...