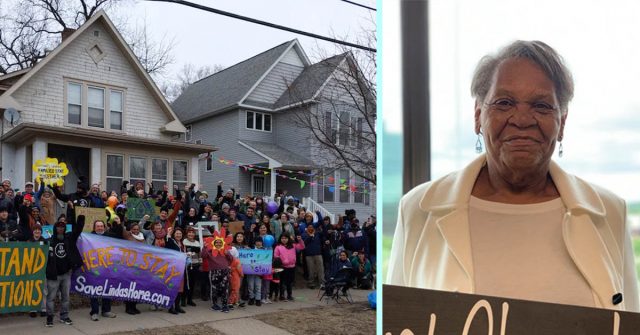 When a sweet 70-year-old woman was facing eviction from her home, her kind neighbors came together and raised $275,000 to help her purchase it.

Linda Taylor has lived in her home in Minneapolis for nearly 20 years. She’s spent much of her time helping others and working for a local nonprofit, but during the pandemic, the nonprofit she worked for had to scale down and she was unable to continue working with them. Despite not having a paycheck, she continued paying her rent, $1,400 a month, by using her savings and a small local subsidy.

Linda originally owned her home, but had fallen behind on payments. While not fully understanding the terms of an agreement, she ended up giving away ownership of her home, and agreed to afterwards rent it from the new mortgage holders. During the pandemic her rent was raised twice, and as a senior who lives alone, her monthly payments were becoming more and more difficult to make.

She received a notice one day explaining that her landlord needed her to purchase her home or to vacate the property, which left her deeply worried. They set a purchase price of $299,000, which was more than Linda could afford.

“I could not sleep, I could not eat,” Linda said. “I felt really defeated. It felt like the world had been pulled from under me. My house means everything to me.”

Unsure about what to do, Linda told her neighbor, Andrew Fahlstrom, about the notice she had received. Andrew was also saddened by his neighbor’s situation.

“She has always been the one in the neighborhood who greets everyone,” Andrew said.

Andrew began speaking with other neighbors and asking for ideas about what they could do together to help Miss Linda, and the neighbors were eager to help. They spoke with Linda and she shared her story with them.

“People listened to what Miss Linda was saying and wanted to do something,” Andrew said. “It was just such a clear and compelling story that everyone rallied for her. This is a person who has been paying for housing for 18 years.”

Andrew and 400 of Linda’s neighbors signed a letter asking her landlord to delay evicting her and to begin negotiations so that she could buy her house. They hand delivered the letter, and the owner agreed to their request. They agreed to let her rent for several more months, and lowered the asking price to $250,000.

While this temporarily saved Linda from being evicted, the purchase price was still out of her reach, so her neighbors began a fundraising effort.

“Then it became a fundraising effort instead of an eviction defense effort,” Andrew explained.

“I don’t want anyone getting displaced or priced out of the community,” Julia said. “We all believed collectively that we were going to do what it takes to keep Miss Linda here. So many people know and love this woman.”

They organized a block party, social media campaigns and an art show, where Linda, who enjoys painting, was able to feature and sell some of her artwork to help fundraise for her home.

Numerous kind hearts donated between $5 to $15,000 to help Linda keep her home. After seeing that she still needed a good amount more to be able to purchase, a local church stepped in and donated $200,000 to help, which combined with fundraising gave Linda the exact amount she needed to purchase her home.

“When that came through, my faith grew bigger than a mountain,” Linda shared.

In four months her neighbors altogether raised $275,000, enough to buy her home and to cover repairs, with a little extra left over which is set aside to pay her monthly utility payments.

Linda was both surprised and deeply moved by the generosity and kindness of her neighbors.

“I knew my neighbors loved me, but I didn’t know how much,” she said.

Linda was able to purchase her house, and after nearly 20 years, her home was finally hers.

“When it’s yours, it gives you a different type of feeling,” Linda said. “I’m safe, I’m secure, and I have a home.”

Linda is looking forward to hosting backyard barbecues and movie nights for her neighbors, and even while she has spent so many years of her life helping others through a nonprofit, she also plans to do everything she can to pay this kindness forward.