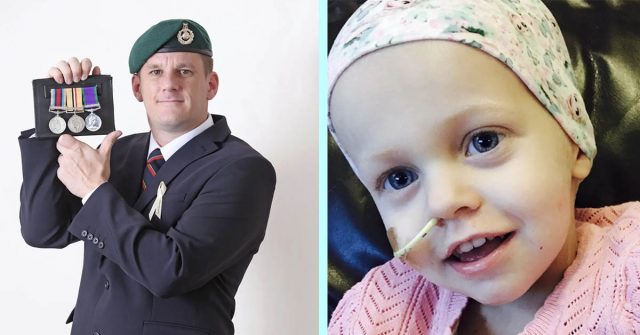 When a former royal marine saw a post online about a 4-year-old girl who’s parents needed to raise £200,000 for her cancer treatment, he auctioned off his war medals to fund the treatment that would help save her life.

Matthew Goodman first learned of 4-year-old Lottie Woods-John after seeing a post of her on Instagram. The post explained how sweet little Lottie had just been diagnosed with cancer, and how her parents were unable to afford the lifesaving treatment which would cost an unexpected £200,000 (roughly $237,000).

Having a 16-month-old daughter himself, Matthew felt deep compassion for Lottie and for her parents, even though he had never met them.

“I began following Team Lottie’s journey on Instagram,” Matthew said. “I have a 16-month-old daughter and I just couldn’t imagine it; being thrown into a situation you have no control over and being expected to fight for your child and raise £200,000 on top of that.”

Matthew began to think about what he could do to help the little girl in the photo he saw.

“I thought, what do I have of value?”

Matthew, a former royal marine, had been awarded three medals during his service in Afghanistan, Iraq and Northern Ireland. He thought that they would likely receive a large amount if he auctioned them, so he messaged Lottie’s parents letting them know that he would sell his medals and give the proceeds to them for her cancer treatment.

“My medals were just sitting in the drawer doing nothing, and I thought they could be used for something worthwhile,” Matthew said. “They were awarded for the sacrifices I made, but I’m happy to forgo that honor if it means helping a little girl in desperate need. Those medals have a greater purpose, they can do good things in the world. Someone is going to like the medals and Lottie will hopefully get the chance to go the US for treatment.”

Lottie’s parents were both surprised and deeply grateful after learning what Matthew was going to do for their daughter.

“When I heard what Matthew was doing I was totally speechless,” Lottie’s mother, Charlotte, shared. “I just didn’t know what to say. It was huge for me because it’s such an amazingly kind thing to do that I just didn’t think it would be possible.”

Matthew auctioned his medals on Ebay for £32,000, and his generosity attracted the attention of the media, which helped spread awareness for Lottie’s cause. Together with the help of other generous donors online, they were able to raise enough for Lottie’s treatment. Matthew was also able to meet Lottie in person. When Matthew was first introduced to Lottie, he smiled, and tears began to fill his eyes.

“It’s quite overwhelming. I just need a moment,” he said. “[Meeting Lottie] just brings home how worth it it is.”

Lottie was able to undergo treatment, which included chemotherapy and a 13 hour operation which removed 95% of the cancer.

Today Lottie’s hair has grown back, and her smile is just as beautiful as ever.

A Teacher Ran Out Of Days Off To Stay With His Cancer-Stricken Daughter, So His Kind Colleagues Donated 100 Days

The Kind Of Woman You Are According To Your Sleeping Position