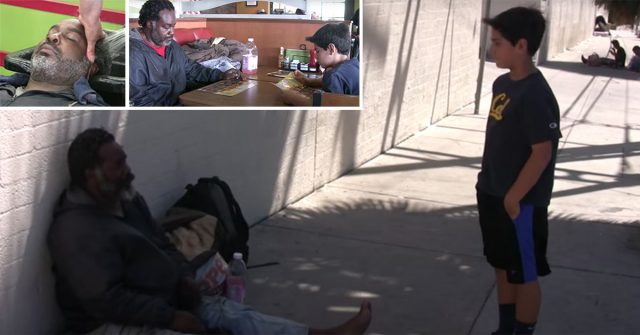 When Elliot Katz sees a homeless person on the streets, rather than passing them by, he starts up a friendly conversation and sees what he can do to help their situation.

Michael is one of many rough sleepers whom Elliot has met. Michael was sleeping in a tent on a sidewalk when Elliot came up to him and got to know him. He learned that Michael has been homeless for eight years. He used to work in a music store, but it had closed down. He has very little money and no place to call home, but he does his best to survive in his tent on the sidewalk.

Elliot asked Michael if he would like a free haircut and to be treated to lunch. Michael agreed and the two had a heartwarming afternoon together. Elliot helped Michael with a haircut, a clean shave, and he bought lunch for both him and his wife who watched his tent while they were away. He also gave Michael a nice new t-shirt.

Todd was laying against a concrete wall when Elliot’s kind heart decided to say hello. He learned that Todd had moved to California from Ohio, where he had previously been a security guard.

The two went out for a haircut, and then to a restaurant for some food. Elliot said that while Todd doesn’t speak much, when he does speak, he has a soft, gentle voice.

Elliot saw Eugene with a sign on the side of the road and started up a friendly conversation. He learned that Eugene had been homeless for 18 months, and that he used to be a truck driver. He’d recently come on hard times, and had been sleeping under a doorway next to a store. Elliot took him out for a nice meal and gave him a new shirt. Eugene had a lovely, appreciative smile the whole time.

Elliot shared with Understanding Compassion that he has wanted to help the homeless since he was 8-years-old. For his bar mitzvah project at age 12, he decided to start a nonprofit which helps the homeless called Reaching Out California.

“I started Reaching Out California when I was 12 years old,” Elliot shared with Understanding Compassion. “Since I was around 8 years old, my family went to the Midnight Mission (on Skid Row, in downtown Los Angeles) 3 to 4 times each year to serve dinner to the many homeless people who live on the streets in that part of the city. When I was 12 and I was asked to choose a charity to support for my bar mitzvah project, it was a very easy decision for me: I wanted to do more to help the homeless.”

His kind heart wants to help everyone understand that homeless people are just regular human beings who have fallen on hard times.

“I decided that the best way for me to get people to understand that homeless people are just people on hard times was by meeting homeless people on the street and videotaping my encounters with them,” he said.

With his nonprofit, he gets donations which he uses to help the homeless he encounters on the streets. He’s been able to deliver 300 sack lunches to the homeless during the pandemic, has furnished a new apartment for a homeless man who had been on the streets for five years, has donated to countless clothing drives, and his organization regularly delivers clothes, shoes, rugs and food to the homeless.

“I have had clothing drives at my school, and have delivered clothing, meals, and other things to homeless people at the Midnight Mission,” Elliot explained. “Our volunteers have also prepared and distributed hundreds of meals, hygiene kits, and other things that we have distributed to the homeless people we’ve met on the streets. I set up a Reaching Out California club at my school so more people could help us help the homeless.”

“At the beginning of the COVID pandemic, in March 2020, Reaching Out California volunteers made hundreds of sandwiches, and delivered full meals, along with hundreds of pairs of socks and other things to the Midnight Mission, for them to distribute. Sadly, the problem of homelessness is getting worse and worse, so we have a lot more work to do. I’m very excited to be part of the solution, or at least a part of it.”

Elliot’s kind heart is doing a wonderful job; not only for feeding and clothing the homeless, but for also taking his time to make real connections with them. He’s helping acknowledge our homeless brothers and sisters as human beings; many of whom are often the most ignored, depressed and are suffering the most in society.

We can support Elliot’s wonderful work with Reaching Out California here.

Watch this beautiful video of Elliot helping Michael, Todd and Eugene. You are Loved:

This Kind Man Bought A Stranger His Coffee, Told Him He Is Blessed And...

15 Tricks With Baking Soda That Everyone Should Know