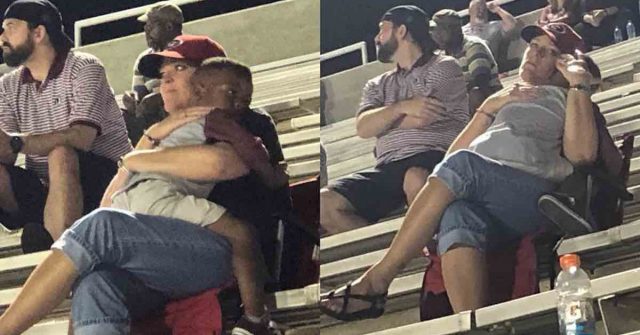 When Star Balloon-Bradley took her nephew Isaiah to a football game, the cute little boy wandered around the stands near his aunt and ended up making a new friend. He started sweetly talking with a woman, who enjoyed their conversation, and while they’d never met before, they were “talking like they knew each other.”

“I don’t know who this lady is but if you know her tell her she’s awesome,” Isaiah’s aunt wrote in a post online. “Isaiah walked up to this lady at our last home game two weeks ago. He sat on her lap and they were talking like they knew each other. It lasted no more than 20 mins. However, she left right after halftime to meet up with her little girl.”

Two weeks later Isaiah came with his aunt to another football game, and while they were there, Isaiah spotted his kind friend again.

“Fast forward to tonight… not long after we sat down at the game Isaiah spotted her. She waved at him and he made his way up to her. I thought their interaction would be the same as last time but I was wrong. Isaiah walked right up to her smiling, crawled in her lap and laid his head down on her shoulder. She welcomed him with open arms. This lady patted and rocked Isaiah to sleep like she had given birth to him. It was the sweetest!!” Isaiah’s aunt shared.

After holding Isaiah and gently rocking him to sleep, Star asked the kind woman if she’d like her to come get him, but the woman insisted that it was fine and she seemed to enjoy taking care of her new little friend.

“We asked her if she wanted us to get him but she kept telling us she (and he) was fine!! Isaiah and this lady has NEVER met before other than those 20 mins at a game 2 weeks ago. I told her tonight that I am so sorry and I don’t know why he keeps bothering her. She replied he’s no bother and to not say that again. She said he was her new friend. She then went on to say she only has one child who is 15 and moments like this are priceless!!!”

“With all of the racial tension that’s going on I’m glad to see the pictures like these because it goes to show color don’t matter to a lot of people. It really don’t!! Arguing over stuff as such makes us miss the simple pleasures in life. I hate I didn’t get her name but I will next game because I’m sure Isaiah will make his way back to her. I love her and don’t know her!”

Star shared her photos of the kind woman holding Isaiah online, and many hearts also appreciated the woman’s kindness.

“Thank you for showing this sweet boy he is lovable & accepted and that you are trustworthy & open. It speaks volumes that this happened organically,” shared Vicki M.

“Wow, this is beautiful. Kids know kind hearts. Maybe you shared something in a past life. Who knows??? Awesome,” commented Maria Valadez.

“So sweet Angela! Sometimes children are drawn to us and we don’t need to know why and it does not matter what color or other differences may exist! I have considered it a compliment when this has occasionally occurred. Thanks for being there for him.🙏♥️🇺🇸🙏” wrote Juanita B.

“Mommas are mommas no matter what color…the deep love of children is precious!!!” wrote Beverly K.

Star later discovered that the kind woman’s name is Angela, and she shared a response after seeing the photo of her and Isaiah.

“Update: We found out who she is,” Star wrote. “Her name is Mrs. Angela. She’s such a sweet lady y’all! It’s awesome how God connects people together for whatever reason!!”

“This is her post after finding out I posted this picture for her:
“To God be all praise, glory, and honor! I have been overwhelmed with emotions today as I have read the post Star Balloon-Bradley shared. I am humbled by the kind words every one has spoken. Isaiah is absolutely adorable! I pray people will [know] Jesus in all this & know His love is beyond measure & that is how I want to love & life my life. I’m not worthy but He sure is!” -Angela ❤️ “

See Also: Parents Asked Ronaldo For Jersey To Sell For Child’s Lifesaving Operation; He Gave A Full Payment Of $83,000

The Scent You Pick Reveals A Lot About Your Personality