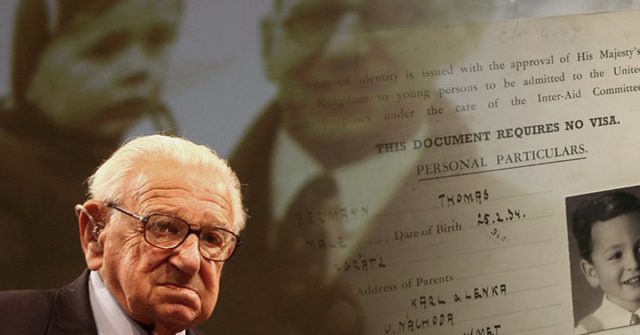 In 1939, on the eve of World War II, a young Nicholas Winton did something truly heroic and compassionate.

He risked his life to successfully save 669 children from Nazi concentration camps during The Holocaust by ensuring their safe passage to Britain. He never spoke of it again until fifty years later when his wife found a scrapbook in the attic of their home that contained the names, pictures and documents of the children that he saved. She was so moved by his actions that she decided to share his good deeds with the world.

In 2003, Winton was knighted by Queen Elizabeth II for “services to humanity, in saving Jewish children from Nazi Germany occupied Czechoslovakia”. On 28 October 2014, he was awarded the highest honour of the Czech Republic, the Order of the White Lion (1st class), by Czech President Miloš Zeman.

In 1938, Nicholas Winton was a young stockbroker in London. He was keenly aware of the events unfolding on the continent. Jews were under threat in Nazi-occupied Europe. Anti-Semitism was established in law and violence against Jewish buildings and businesses was increasing. It was clear to many that worse would follow.

Instead of wringing his hands, he headed to Prague and hatched a plan that saved the lives of hundreds of children in the months before the outbreak of World War Two.

In the early years of Hitler’s rule, the Nazis attempted to make life so unpleasant for Jews that they would be forced to emigrate. Yet few other countries were willing to accept an influx of Jewish refugees.

Many countries, including Britain, tightened their immigration policies. In the summer of 1938, 32 countries met in Évian, France, to address the growing refugee crisis. But virtually all refused to allow more Jews in.

However, 9 November 1938 saw an alarming turning point in Nazi anti-Semitism. Throughout German occupied territory, a wave of violent protest broke out against the Jews. Synagogues were burned, businesses attacked and windows smashed in what became known as Kristallnacht – the ‘Night of Broken Glass’.

Nicholas Winton was a socialist with an interest in international affairs and links with many Labour politicians. However, one thing set him apart from the British establishment.

Winton was born Nicholas Wertheimer in 1909, to parents of Jewish descent who were keen to integrate into British life. They anglicized their name and Winton was baptized into the Anglican church. His family contacts provided him with a particular insight into what was happening in Europe and what the Nazi regime might be capable of.

In December 1938, Winton had been planning to take a winter sports holiday. Just before he left, he received a letter from his friend Martin Blake, who had already travelled to Prague on behalf of the British Committee for Refugees from Czechoslovakia. It contained an invitation: ‘I have a most interesting assignment and I need your help. Don’t bother bringing your skis.’

This simple appeal would thrust Winton into the heart of a rapidly developing humanitarian crisis.

In Prague, Winton saw for himself the full scale of the problem facing Jews in German-occupied Sudetenland. Refugee camps were filling with families forced from their homes. Occupants were struggling to survive the harsh European winter. Winton was struck by the appalling conditions and his greatest concern was for the children.

As a British citizen with contacts, Winton was convinced he could arrange the evacuation of young refugees to England. Winton and his colleagues Martin Blake and Doreen Warriner set up a makeshift headquarters in a hotel in Prague and began taking the names of families who wished to send their children to safety.

Winton’s work began in London Transporting hundreds of young refugees across Europe required careful planning. Winton returned to London and a mountain of paperwork. The British government was only willing to let vulnerable children enter the country if strict conditions were met.

Winton had to arrange a foster family for every refugee who left Czechoslovakia. A few children had relatives waiting in Britain. But in most cases, Winton had to persuade complete strangers to take the children in. He placed ads in newspapers calling for volunteers. Fortunately, the British government had already begun plans to evacuate British children from city centers in the event of war so the British public were familiar with the idea of opening their homes to those in need.

Nicknamed the “British Schindler” by the British press, he appeared on a UK television program called That’s Life! in 1988. He was invited as a member of the audience, completely unaware that the people sitting around him were only alive because of his bravery and selflessness. Watch the video below to see the moment he finally realized who was sitting next to him:

A post shared by Understanding Compassion (@understanding_compassion) on Mar 1, 2018 at 11:23pm PST

Compassion Is Spreading Faster Than The Coronavirus: Here’s A List Of The Kind Things...