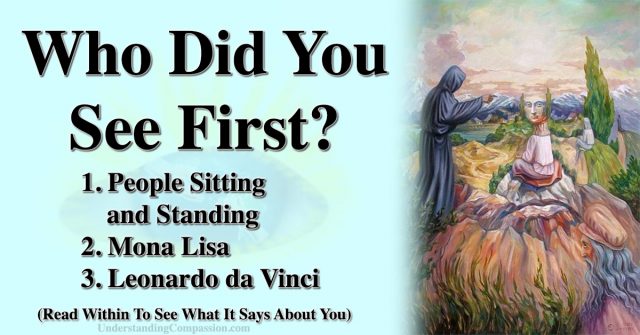 Homer, Leonardo da Vinci, Shakespeare, Mozart, Tolstoy, Galileo, Newton, Darwin, Curie, and Einstein. What do these world-famous figures in the arts and sciences have in common? They’re what we refer to as geniuses and their bright minds and unique ways of viewing the world each helped humanity to understand different aspects of the world.

Similar to classic ink blot tests, abstract images and the way we interpret art can reveal noteworthy details about hidden aspects of our personality and the way we think and process information.

The psychological benefits of viewing art can also be quite wonderful, as art encourages creative thinking, increases brain connectivity and plasticity, and also increases empathy, tolerance, and feelings of love.

Studies have found that mental decline is often due mainly to the loss of communication between brain cells, not from the death of brain cells themselves. Art can be useful in getting both hemispheres of the brain communicating with each other, and art also enhances problem-solving skills as well.

In one study of over 10,000 students, researchers found that a one-hour trip to an art museum changed the way they thought and felt. Students who visited an art museum not only showed increased critical thinking skills, they also exhibited greater empathy towards how people lived in the past and expressed greater tolerance towards people different than themselves.

Simply viewing art has also been found to give pleasure, much like falling in love. Brain scans revealed that looking at works of art trigger a surge of dopamine into the same area of the brain that registers romantic love.

In this fun personality test, see who you notice first when looking at the following picture by Oleg Shuplyak, then read below to find out what it means in terms of your personality and inner genius. 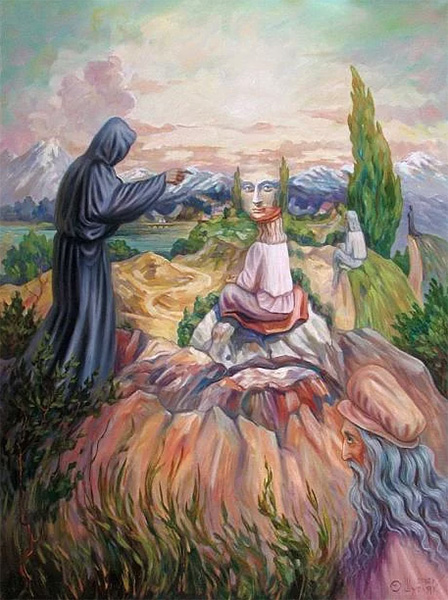 “It had long since come to my attention that people of accomplishment rarely sat back and let things happen to them. They went out and happened to things.” ~Leonardo da Vinci.

If you first noticed one of the figures sitting or standing in the picture, it represents being both a student and a teacher in life. You’ve likely had an extensive education and have learned a great deal about many topics in the world. One aspect of being a genius is to be well versed and exceptionally skilled in numerous areas of life, and your persistence in the area of learning has allowed you to develop this ability. Rather than brag about your depth of knowledge or of your many successes in life, you choose to enjoy the quiet solitude and peace that comes from being in nature, and in living a humble life. 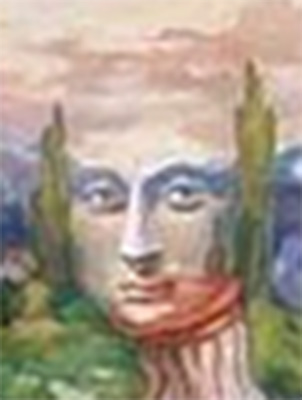 If you first saw the Mona Lisa when viewing this picture, then you have an eagle eye for detail and are one of the smartest and wisest of people. The Mona Lisa, painted by the genius Leonardo da Vinci, has been described as “the best known, the most visited, the most written about, the most sung about, the most parodied work of art in the world.” Worth nearly $1 billion dollars today, Mona Lisa’s expression, which is frequently described as enigmatic and the monumentality of composition, also shows the gentle smile that has entranced viewers for over 500 years.

You likely often have ideas of deep genius come to your mind, and if you decide to express them, you never know just how influential and magnificent they may become. The key to your genius ideas rests in your kind heart and gentle nature. If you stay true to your heart, and let it lovingly guide you in manifesting these incredible ideas, then you can make something truly wonderful that has a positive impact on humanity.

If you first saw the image of Leonardo da Vinci when viewing the picture, then your eye is seeing the genius within the painting, like a mirror, reflecting back the genius that exists within yourself. You’ve likely excelled in many areas of your life, and often amaze others with your unique ability to do certain difficult things quickly and easily. Leonardo da Vinci was a genius of geniuses, whose areas of intelligence included invention, painting, sculpting, architecture, science, music, mathematics, engineering, literature, anatomy, geology, astronomy, botany, writing, history, and cartography. Leonardo was known for his “unquenchable curiosity” and “feverishly inventive imagination,” and you also likely will stop at nothing to learn or accomplish something once you set your mind to it.

While your bright mind excels in all that you do, you often realize the need for rest and relaxation by enjoying the purity of nature, which has been untouched by the hands of humans. Your deep appreciation for peace and for the environment often brings wonderful ideas of how to protect nature to your mind. Spend a bit of time putting a few of these ideas into action, and you may create something that future generations will thank you for.

What did you see first when viewing the picture?

A post shared by Understanding Compassion (@understanding_compassion) on Apr 4, 2018 at 7:31pm PDT

Kind NFL Player Donates More Than 170 Down Payments On New Homes For Struggling...