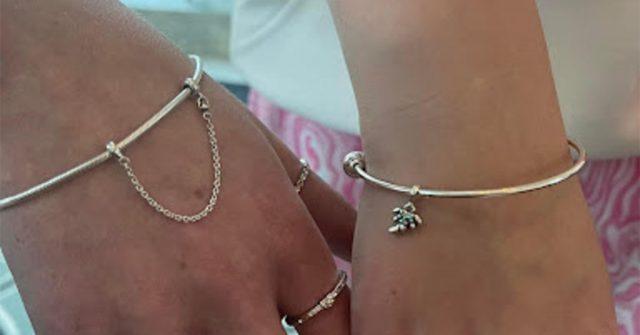 After two young girls waited patiently for 20 minutes while a family in front of them bought jewelry, the father they waited for gave each of them $50 to buy a nice bracelet.

“A couple of days after Christmas we were at a shopping centre in Melbourne so my three daughters could spend the Christmas money we gave them (it’s too hard buying for tweens and teens, am I right?)” the mother of the girls shared in a post on Uplift.

The girls planned to use their Christmas money to buy the cheapest bracelets they could find at a jewelry store. As they got to the store, a family was being helped in front of them, and while the family looked at and purchased many expensive gifts, the girls patiently waited for more than 20 minutes.

“My two youngest were lining up to buy the cheapest bracelet they could find in a popular jewelry store. There was a family in front of them who was taking a long time and spending a lot of money buying different gifts, but my daughters didn’t mind, they just waited patiently for 20 minutes.”

The father of the family noticed that the two young girls were waiting ever so patiently for them to finish shopping, so he told them that he wanted to buy them each a nice Christmas gift from the store.

“The father turned to them and apologized for how long they were taking and my daughters smiled and said it was no problem. He then said, “Will you accept a Christmas gift from me? Pick out anything you want in the store!”’

The girls were surprised by the father’s generosity and politely told him that he didn’t need to. He insisted on helping them, and ended up contributing $50 towards each of their bracelets, allowing them to get better ones than the cheapest they had been planning to buy.

“They were completely shocked and declined his very generous offer but he insisted they at least take $50 each and buy something for themselves from him and his family… so they both choose a better bracelet than they would have been able to afford and thanked the man profusely.”

Kind Woman Paid For Child’s Items At Store, Said Previously A Kind Stranger Had Paid For Hers

What You See First Reveals Hidden Aspects Of Your Personality

Kind Shuttle Driver Packs 8 Extra Lunches Each Day To Give To The Homeless...