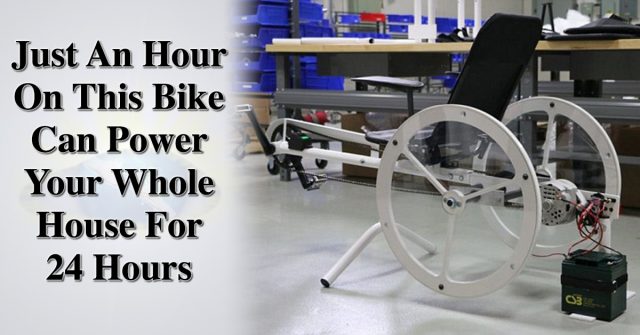 Healthy exercise, free energy for your house, and saving potentially a few hundred dollars a month on your energy bill, it sounds like a win-win-win situation!

The bike which is called the ‘Free Electric’ from the group Billions in Change uses a simple stationary bike to generate 24 hours of electricity, and it’s backed by Living Essentials CEO Manoj Bhargava.

The bike requires just one hour of pedaling to produce a whole day’s worth of electricity, and the CEO and philanthropist is calling it ‘the cheapest, most practical way’ to create electricity around the world.

An alarming 3 billion people around the world have very limited or no access to electricity. When figuring out the compassionate mission of how to elevate all humans on Earth out of poverty, we know based on numerous studies that giving each person a solid education is the biggest solution. When people around the world are given free electricity, they are able to access the internet: the biggest storehouse of online information and education that has ever existed. By providing this Free Electric bike to those without power, millions upon millions will be able to receive an education and be able to elevate themselves out of poverty.

By using this bike for just an hour each day, or for a family of four, just 15 minutes each, you get 24 hours of free electricity.

One of the other extremely wonderful benefits is that no pollution is generated when using this bike!

Depending on income levels, the price will vary dramatically – Bhargava says it will go from free to $250, and ‘fancier’ versions down the line could even climb to $1500 in wealthy locations.

“By putting electricity in the hands of those who are without it,” Bhargava says, “impoverished people will be able to elevate their situations.”

“The real thing is to get the poor out of poverty, and one of the basics is energy.”

Stay tuned and follow the wonderful organization Billions in Change as they also have proposed solutions for drought, health, and energy limitations.

Watch the video below to see the ‘Free Electric’ bike in action!

Together we can elevate all humans on Earth out of poverty through giving everyone a solid, healthy and compassionate higher education. Studies have shown that reducing poverty reduces crime and reduces birth rates, two of the biggest issues of our time, and the Free Electric bike also reduces pollution, making it a wonderful way to help brighten the world.

After His Fishing Buddy Passed, Lonely 75-Yr-Old Writes Ad Looking For A Friend; Is...

Fun Visual: What You See First in This Image Identifies Your Hidden Inner Self