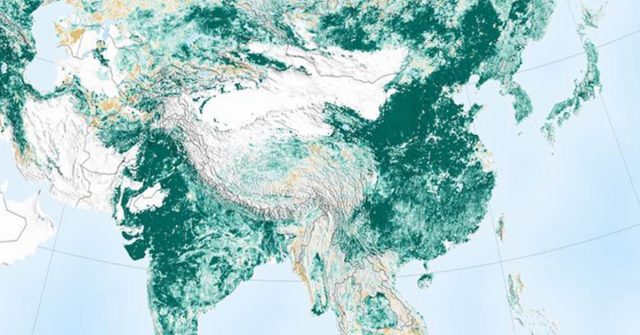 The world is literally a greener place than it was twenty years ago, and data from NASA satellites has revealed a counterintuitive source for much of this new foliage.

A new study revealed that China and India—the world’s most populous countries—are leading the increase in greening on land. This ‘greening effect’ is mostly the result of the combined efforts of millions of Chinese and Indian citizens through major tree-planting programs, as they seek to purify the air and land which have been heavily polluted due to fossil fuels and greenhouse gases. Expanded agriculture in both China and India is also causing more greenery to appear.

For example in 2017 alone, India broke its own world record for most trees planted in a single year when volunteers gathered to plant 66 million saplings in only 12 hours.

Ranga Myneni and colleagues of Boston University first detected the greening phenomenon in satellite data from the mid-1990s, but they were unsure of whether human activity was a chief cause. They then decided to closely monitor the total amount of Earth’s land area covered by vegetation and how it changed over time.

The research team found that global green leaf area has increased by 5% since the early 2000s, with roughly 25% of the increase coming from China. Overall, one-third of the Earth’s vegetated lands are greening, while 5% are growing browner.

The greenery world maps show the increase or decrease in green vegetation—measured in average leaf area per year—in different regions of the world between 2000 and 2017. Note that the maps are not measuring the overall greenness, which explains why the Amazon and eastern North America do not stand out, among other forested areas.

“China and India account for one-third of the greening, but contain only 9 percent of the planet’s land area covered in vegetation,” said lead author Chi Chen of Boston University. “That is a surprising finding, considering the general notion of land degradation in populous countries from overexploitation.”

This important study was made possible thanks to a two-decade-long data record from the Moderate Resolution Imaging Spectroradiometer (MODIS) instruments on NASA’s Terra and Aqua satellites. MODIS is the intensive coverage they provide in space and time: the sensors have photographed up to four pictures of nearly every place on Earth, every day, for the past 20 years. The importance of NASA cannot be overstated, as their efforts and technology provide an amazing amount of valuable information for people, countries and environmental organizations all over the world.

“This long-term data lets us dig deeper,” said Rama Nemani, a research scientist at NASA’s Ames Research Center and a co-author of the study. “When the greening of the Earth was first observed, we thought it was due to a warmer, wetter climate and fertilization from the added carbon dioxide in the atmosphere. Now with the MODIS data, we see that humans are also contributing.”

China’s outsized contribution to the global greening trend comes in large part (42%) from programs to conserve and expand forests. These were developed in an effort to reduce the effects of soil erosion, air pollution and climate change. Another 32% of the greening change in China, and 82% in India, comes from intensive cultivation of food crops.

The land area used for agriculture to grow crops in China and India has increased much since the early 2000s, yet both countries have greatly increased both their annual total green leaf area and their food production in order to feed their large populations. The agricultural greening was achieved through multiple cropping practices, whereby a field is replanted to produce another harvest several times a year. Production of grains, vegetables, fruits and more have increased by 35% to 40% since the year 2000.

The researchers also made an important point: that the gain in greenness around the world does not necessarily offset the loss of natural vegetation in tropical regions such as Brazil and Indonesia. There are consequences for sustainability and biodiversity in those ecosystems beyond the simple greenness of the landscape. While the increase in greenness is a good sign, the nations around the world still have a long way to go in preserving natural rainforests and habitats, and in greatly reducing the amounts of carbon dioxide and fossil fuels that are being released into the atmosphere. For example, a WHRC study estimates that to save the entire Brazilian Amazon rainforest from deforestation, it would only cost between $100 to $600 million per year: which is less than one-third of 1% that the world spends on its annual military budget. The question comes into play as to what is really keeping humanity safe; weapons or saving the Earth’s environment and ecosystems?

Nemani sees a positive message in the new findings:

“Once people realize there is a problem, they tend to fix it,” he said.

“In the 1970s and 80s in India and China, the situation around vegetation loss was not good. In the 1990s, people realized it, and today things have improved. Humans are incredibly resilient. That’s what we see in the satellite data.”

With the world’s population reaching tipping point levels, and with our Earth’s fragile ecosystem being affected, let’s each do our part to love our wonderful planet Earth and to help keep it green, clean and beautiful.

This research was published online in the journal Nature Sustainability.

Help plant some of this positivity with your friends and family by sharing this article online.

A post shared by Understanding Compassion (@understanding_compassion) on Feb 20, 2019 at 11:50pm PST