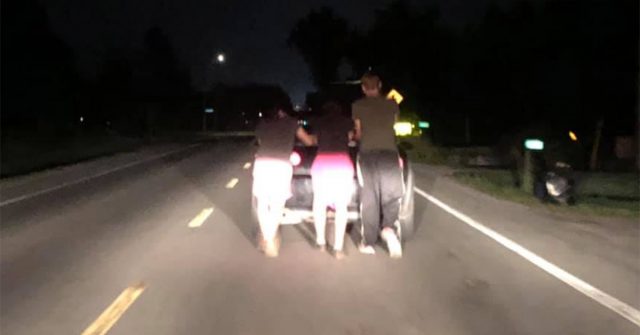 When three kind teens saw a stranger’s car had broken down on the side of the road, they spent three hours pushing it all the way home for her.

Dan Morrison was driving home from work around 1 am near Niagara Falls, Ontario, when he saw a car stopped in the middle of an intersection with the engine smoking.

“Last night I am driving home from work when I see someone stranded in the middle of an intersection with their car smoking. I have been there, and it really sucks. So I slow down, ask if they are alright,” Dan shared in a post online.

Dan found that the lady driving was upset and stressed, as she had just gotten the car a few weeks ago, and she could not afford to pay for a tow truck to get her car home. She couldn’t leave the car in the middle of the intersection, and didn’t know what to do. As they were talking, a group of three teenagers, Aeron McQuillin, 18, Bailey Campbell, 17, and Billy Tarbett, 15, also stopped to see if they could help.

“This poor lady got this car 6 weeks ago, and it now looks like needs a new engine. So a group of 3 teenagers now stop. Look over the car and help push it into a nearby lot. The owner of the car does not know what to do. She cannot afford a tow, and can’t leave the car there. I then hear “you boys ready for a push?”‘

The three young men were on their way to a Tim Hortons donut shop for a late night snack when they saw the woman’s car stopped with smoke coming out of it. They figured out that an engine leak was causing coolant and oil to mix, and that the car was not safe to drive until it was fixed. After pushing the lady’s car to a nearby lot and understanding her situation, they told her that they were going to push her car all the way home;
5.5 miles (9 km).

The teenagers grabbed a few waters, a speaker for some music to listen to, and began their journey, which included going up a big hill. Dan followed behind them in his car while they pushed, keeping his headlights on to help them see in the dark, and keeping his blinkers on so that other cars could see to drive around them. Halfway to the lady’s home, the car’s battery lost power, so they had to stop and recharge it to get the car back into neutral. But around 4:30am, they made it.

As they pulled up to the woman’s home, she was deeply grateful. They shared a few hugs and then everyone went home.

When later asked, Aeron said that while it seemed like a crazy idea at the time, he thinks it was definitely worth it to help someone in need.

“We were at the right place at the right time, and this is [something] that we can look back on in 10 years and say it was one of those crazy things we did, but it was all worth it,” Aeron said.

“We had nothing better to do, but even if we did I would like to think we would have helped her anyway,” Billy said.

Hundreds of thousands of people online have appreciated the kindness and effort shown by the young men to help a stranded lady in need. Aeron simply said that he hopes it can inspire others to lend a helping hand.

“We hope more people can learn from this situation and not be afraid to lend a helping hand to those in need,” Aeron said.

Thousands Of Studies Confirm: This Is What Happens To Your Body If You Use...