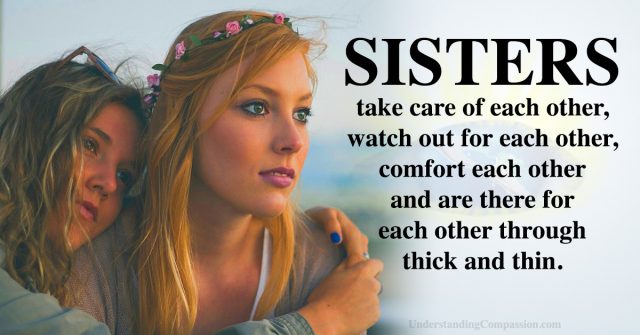 Something about having a sister, even a little sister, makes 10 to 14-year-olds a bit less likely to feel depressed.

A study of nearly 400 families has shown that having a sister helps to protect young teens from feeling lonely, unloved, guilty, self-conscious and fearful. Researchers studied 395 families from Seattle with two or more children. At least one child in each family was between the ages of 10 and 14. The research discovered that affectionate siblings have positive influences on each other regardless of age, gender, or how many years they are apart:

The intriguing findings come from a study which deeply examined the impact siblings have on one another. The study was conducted by Brigham Young University’s professor Laura Padilla-Walker.

“Even after you account for parents’ influence, siblings do matter in unique ways,” said Padilla-Walker, a top professor in BYU’s School of Family Life. “They give kids something that parents don’t.”

A post shared by Understanding Compassion (@understanding_compassion) on Jan 9, 2019 at 7:15pm PST

Padilla-Walker’s research stems from BYU’s Flourishing Families Project and appeared in the Journal of Family Psychology. The study included 395 families with more than one child, at least one of whom was an adolescent between 10 and 14 years old. The researchers gathered a wealth of information about each family’s dynamic, and followed up again one year later to collect more data. Statistical analyses showed that having a sister protected adolescents from feeling lonely, unloved, guilty, self-conscious and fearful. These wonderful effects were seen in siblings having older sisters and also in those having younger sisters, and they occurred regardless of the age differences.

Brothers also helped! The study discovered that having a loving sibling of either gender promoted good deeds, such as helping a neighbor or watching out for other kids at school. In fact, the findings from the study indicated that loving siblings fostered charitable attitudes more than loving parents did. The relationship between sibling affection and good deeds was twice as strong as that between parenting and good deeds.

“For parents of younger kids, the message is to encourage sibling affection,” said professor Padilla-Walker. “Once they get to adolescence, it’s going to be a big protective factor.”

Many parents often worry about the seemingly endless fighting that occurs between siblings. The study looked at findings centered around conflict and found that hostility was indeed associated with greater risk of delinquency. Yet professor Padilla-Walker also sees a silver lining in the data: The fights and squabbles give children a chance to learn how to make up, and to regain control of their emotions; two skills that are very valuable to have in terms of adulthood and in future relationships.

“An absence of affection seems to be a bigger problem than high levels of conflict,” Padilla-Walker explains.

Let your sister know how grateful you are to have her in your life, as you both likely helped protect each other from the many symptoms of depression by being there for one another.

See Also: Her Sister Used Her Allowance To Buy School Supplies For A Bullied Classmate Who Couldn’t Afford Them

A post shared by Understanding Compassion (@understanding_compassion) on Oct 5, 2018 at 1:22pm PDT

Animal Shelter Is Empty ‘For The First Time In History’ After Every Dog Is...