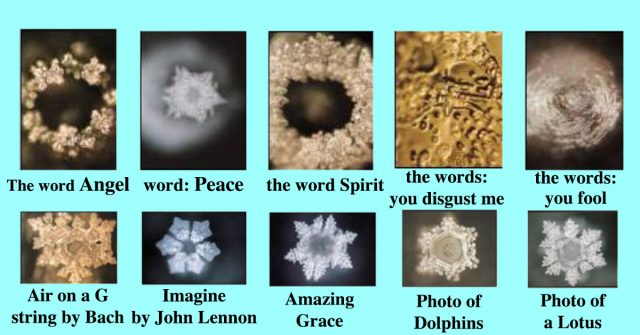 “If you want to find the secrets of the universe, think in terms of energy, frequency, and vibration.” – Nikola Tesla

“What we have called matter is energy, whose vibration has been so lowered as to be perceptible to the senses. There is no matter.” – Albert Einstein

The Energy, frequency, and vibrations of our known universe are scientific concepts that Nikola Tesla and Albert Einstein formulated theories and agreed upon. To Tesla, anything that exists in the universe depends on these three aspects. To Einstein, “everything in life is vibration.”

Science has proven this fact: All of us are composed of energy pulsating at diverse frequencies.

Cymatics illustrate that when sound frequencies move through a particular medium such as water, air, or sand, they directly alter the vibration of matter.

The word ‘Cymatics’ comes from the Greek word, κῦμα, which means ‘waves’. Vibrations applied to an apparatus which uses solid particles, paste, or liquid, display different patterns because of various levels of frequency.

It is the same effect for the application of sound frequencies on distinct phases of matter. It can be water or form of solids such as sand. Sound frequencies have a direct effect on their formation.

Water memory has also shown the physical alterations our different intentions bring to the crystallization of water. Dr. Masaru Emoto demonstrated this amazing phenomenon through his many experiments showing how intentions through sound, emotions, and thoughts can dramatically alter and shape the way water crystallizes.

In our case, the human body is composed of 70% water. Based on the experiments of Cymatics, it makes sense to assume that sound frequencies, such as music, influences the rhythm and vibration of our body.

Certain emotions, thoughts and even the sounds that we hear can have a type of domino effect on our bodies and on our environment.

Take for example when you are listening to soothing classical music. It puts you in a calm state of mind and everything else follows. Your mood changes in an effective way which influences how you treat others and the things you do. It is vibration through sound generating responses in your body.

Our universe has natural vibrations resonating everywhere and around us.

Most music worldwide has been tuned to 440 Hz, starting when the International Standards Organization (ISO) promoted it in 1953.

The frequency of the natural world and the universe measures at 432 Hz. This difference in frequencies may have negative effects on our individual performance, how we conduct ourselves toward others, and our emotions,

Mathematics of The Universe

Cymatics utilizes 432 Hz, which shows the creation of beautiful patterns manifested on particles and fluids.

Such frequency echoes with the golden ratio of the sun and its equinox, the moon, and even great ancient structures believed to be sacred sites: The Great Pyramid of Egypt, the Stonehenge, and the Sri Yantra to name a few.

“From my own observations, some of the harmonic overtone partials of A=432hz 12T5 appear to line up to natural patterns and also the resonance of solitons. Solitons need a specific range to form into the realm of density and span from the micro to the macro cosmos. Solitons are not only found in water mechanics, but also in the ion-acoustic breath between electrons and protons.”

Another interesting factor to consider is that 432 Hz tuning correlates with the color spectrum and chakra system, while 440 Hz does not.

“All of the frequencies in the spectrum are related in octaves, from gamma rays to subharmonics. These colors and notes are also related to our Chakras and other important energy centers. If we are to understand that… Chakras are connected to the Seven Rays of the Solar Spectrum, then the notes and frequencies we use for the same should be the same. A432 Hz is the tuning of the Cosmic Keyboard or Cosmic Pitchfork, as opposed to the A440 Hz modern ‘standard.’ It places C# at 136.10 Hz ‘Om,’ which is the main note of the Sitar in classical Indian music and the pitch of the chants of the Tibetan monks, who tell us, ‘It comes from nature.’”

Music enthusiasts and artists discovered that music felt more soothing and harmonious when set at 432Hz, and it also induces an inward focus of feeling and reflection felt in the spine and the heart. Music set to 440Hz induced a more mental and outward experience, felt mostly in the head. Audio professionals have also explained that 432Hz music can ‘fill an entire room easier’ whereas 440Hz is more linear and directional in sound propagation.

“The ancients tuned their instruments at an A of 432 Hz instead of 440 Hz – and for a good reason. There are plenty of music examples on the internet that you can listen to, in order to establish the difference for yourself. Attuning the instrument to 432 Hz results in a more relaxing sound, while 440 Hz slightly tenses up to body. This is because 440 Hz is out of tune with both macrocosmos and microcosmos. 432 Hz on the contrary is in tune. To give an example of how this is manifested microcosmically: our breath (0,3 Hz) and our pulse (1,2 Hz) relate to the frequency of the lower octave of an A of 432 Hz (108 Hz) as 1:360 and 1:90.”
~innergarden.org

They also gave a microcosmic example of the harmony of 432 Hz to human processes such as our breathing patterns at 0,30 Hz and our pulse at 1,2 Hz.

The video below was created by an opinion neutral creator testing to see whether A=432 Hz or A=440 Hz is better. It’s up to us to decide:

While many of us have enjoyed the sounds of music tuned at 440 Hz from numerous bands and artists, the profound difference cannot be denied when comparing the gentleness and calm felt from music tuned to 432 Hz.

Music at 440 Hz is more linear and more focused on the mind rather than the heart, inducing a small and subtle tension.

“Music based on C=128hz (C note in concert A=432hz) will support humanity on its way towards spiritual freedom. The inner ear of the human being is built on C=128 hz.”
~Rudolph Steiner

While we cannot assert that every idea presented in this article is 100% scientifically accurate, the frequencies which we decide to program our audio devices within our culture does have an effect on our bodies, emotions and mental state, and this is good cause for further research with open minds.

We all have our own intuition and the ability to observe without judgment, so take a second and experience the difference between A=440 Hz and A=432 Hz. Listen with your entire body and a relaxed, neutral awareness, rather than with our preconceived notions, mental ideas, or judgments.

Let us know if this frequency resonates with you.

Do you want to learn how to change your music’s pitch to A=432 Hz? Watch this video to learn how.

What You See First Will Reveal Your Dominant Personality Traits