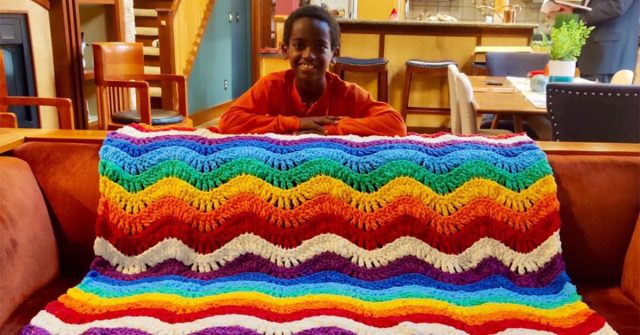 An 11-year-old with a heart of gold, Jonah Larson of La Cross, Wisconsin, is a crochet prodigy who is using his extraordinary crocheting talent to raise money and donate it to the Ethiopian orphanage where he was adopted from as a baby.

It all began when Jonah was 5-years-old and his aunt had come over to visit. She brought with her a box of arts and crafts supplies, and Jonah became interested in a crocheting hook.

“He saw this tiny hook and he came up to me and asked me what it was,” his mother Jennifer said. “I told him it was a crochet hook.”

Jonah was curious how it worked, so he went on his computer and found a YouTube video which taught viewers how to crochet a dishcloth.

“An hour later it was done,” recalls Jennifer, after Jonah had surprisingly made his own crocheted dishcloth at just 5-years-old. “The rest is history.”

After his first crocheting experience, Jonah was “hooked.”

“One day, I was handed a bag of crochet supplies… This seemingly small gift would change my path forever,” Jonah explains.

Jonah says that he loves to crochet because it helps him to relax and feel happy.

“I love to crochet because of the calming effects it has,” Jonah said. “I crochet because it’s very relaxing for me, because I have a very busy mind, and it’s nice to have a little quiet time when I come home from school. Crocheting makes me happy and relaxed.”

Jonah spent years mastering the skill of crocheting, and today this young Einstein of crochet is able to create just about anything. He made his own company named Jonah’s Hands, and with it he regularly donates items he creates and money he earns to the Ethiopian orphanage where he was adopted from as a baby.

Recently he raised $400 himself at an auction, where some of his items were sold, and he then donated it all to the Ethiopian orphanage.

“I am committed to raising money for Roots Ethiopia, an organization that uses the money in the very village I was born in,” Jonah said. “The kids there need help going to school and getting supplies like books and pencils. Mothers can learn to crochet to support their families and keep them together.”

The compassionate 11-year-old setup a GoFundMe and has been working on raising funds to help other orphans.

“Orphan care is close to my heart because I was once one. Not everyone has the opportunities that I have had to be adopted by a loving family. I just feel a strong urge to give back to them,” Jonah shared.

He explained that he loves the organization Roots Ethiopia so much because it helps children soar by giving them a valuable education.

“Roots Ethiopia focuses on two things,” Jonah explained. “First, they support poor rural schools with the resources they need to help children soar. Things like desks and blackboards, libraries, and hands-on science labs are the priorities for schools. Can you imagine children not having books at school, or a place to sit?”

“Next, Roots Ethiopia helps mothers with access to the least amount of resources to identify their strengths and build entrepreneurial skills to create robust small businesses. I know how a natural skill can flourish, and I want to support the success of many hands at work in Ethiopia. I want families to work together, succeed together, and stay together in Ethiopia. Roots Ethiopia is making this possible, and I’m ready to be part of their big, beautiful tapestry of work.”

Jonah’s GoFundMe has already raised more than $20,000 for orphans, and his crocheting business has received more than 4,500 orders. He has hundreds of thousands of Instagram and YouTube followers, who share in the comments how deeply inspired by his mission they are and how much they love his bright smile and positive attitude in his videos.

“I saw your video on facebook and I absolutely fell in love with you! You had put a smile on my face and I know you will make such a positive change in the world. God Bless You,” wrote Anita P.

“We think what you are doing is great! And you are so darn cute! You’ve inspired me to try again to learn to crochet!!” commented Sarah H.

“He’s been a special kid,” said Jonah’s mother, who added that Jonah started reading when he was just three. “He’s inspired so many people. I’m very proud.”

Jonah hopes to make a real difference in the lives of others:

“Giving back to the community is very important to me. I hope [what] people gain from seeing my work is it makes them happy too,” Jonah says.

Jonah’s sweet and caring heart is inspiring thousands upon thousands of people around the world, and is helping Ethiopian orphans have a better chance in life.

Watch the following interview with Jonah and we’re sure you’ll fall in love with him too:

A post shared by Understanding Compassion (@understanding_compassion) on Oct 18, 2019 at 8:28am PDT

Morgan Freeman Converted His 124-Acre Ranch Into A Giant Honeybee Sanctuary To Save The...