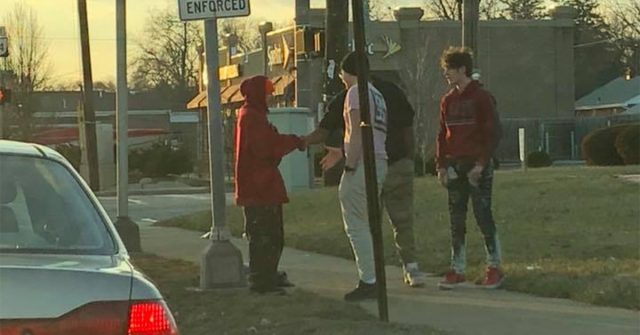 With the recent shootings that have been taking place all over the country, and with the extensive media coverage and glorifying of the suspects, it can be easy to start believing that the youth today are troubled.

Yet it’s important to remember that of the 41 million teenagers living in America, less than a handful commit extreme and violent acts. If you had 41 million sandwiches, and 3 of them were spoiled, would you conclude that all sandwiches are spoiled and rotten? Of course not, and it’s important to maintain a realistic perspective of the world, and to not get caught up in the terribly violent acts glorified on TV. When terrible things happen, the TV media rushes to report it, because they know that it will gain the attention of millions of people, and when millions of people watch their TV show, they earn millions and millions of dollars from the advertisements within the show’s commercials.

It is believed that many of the shooters carry out such awful acts solely to get the media attention, whereas if their photos and terribly sad acts were not publicized all over the country, it is highly likely these violent acts would dramatically decrease.

This powerful quote, which was originally attributed to Morgan Freeman’s interview on 60 minutes, and later was found to contain some points added by an unknown author, contains a lot of truth concerning the question as to why a very small percentage of the youth are taking to violence;

“You want to know why. This may sound cynical, but here’s why. It’s because of the way the media reports it. Flip on the news and watch how we treat the Batman theater shooter and the Oregon mall shooter like celebrities. Dylan Klebold and Eric Harris are household names, but do you know the name of a single *victim* of Columbine?

Disturbed people who would otherwise just off themselves in their basements see the news and want to top it by doing something worse, and going out in a memorable way. Why a grade school? Why children? Because he’ll be remembered as a horrible monster, instead of a sad nobody.

CNN’s article says that if the body count “holds up”, this will rank as the second deadliest shooting behind Virginia Tech, as if statistics somehow make one shooting worse than another. Then they post a video interview of third-graders for all the details of what they saw and heard while the shootings were happening. Fox News has plastered the killer’s face on all their reports for hours.

Any articles or news stories yet that focus on the victims and ignore the killer’s identity? None that I’ve seen yet. Because they don’t sell. So congratulations, sensationalist media, you’ve just lit the fire for someone to top this and knock off a day care center or a maternity ward next.

It is with these thoughts in mind, that this beautiful and compassionate story has all the more meaning.

While driving one day, three teenagers were seen getting out of their car, and each one helping a homeless man, as Jenna Steele wrote in her post after seeing this beautiful act of kindness;

“I just sat at the corner of Jackman & Alexis sobbing my eyes out. A car of 3 teenage boys pulled in to the gas station, parked their car, they all got out & one by one took their wallets out and handed this homeless man some cash. They then shook his hand and went on their way. Let’s stop giving attention to the youth that do these horrible acts and start giving attention to THESE kind of kids.”

Acts of compassion and kindness happen millions of times each day, and are often some of the most beautiful things we can experience in our lives. Yet all too often, our TV’s and media focus on all that is wrong with the world, and in turn, create more of it.

But when we choose to pay attention to the child who asked their father to pull the car over so that they could help a man in a wheelchair shovel the snow off his sidewalk, or to focus on the 86 year old who spends his time knitting hundreds of hats for babies born prematurely in the hospital, or choose to focus on these three wonderful teenagers who pulled over to help this homeless man, we foster an attitude of loving kindness within ourselves, and often follow their example by being kind to others in our daily lives.

Let’s make the choice to turn off the TV when it tries to promote and profit off of horrible acts, and let’s start giving our attention to the worthy and wonderful things happening around the world each day, and inspire the youth to be kind.

3 Sweet Ways To Catch Your Kids Being Good