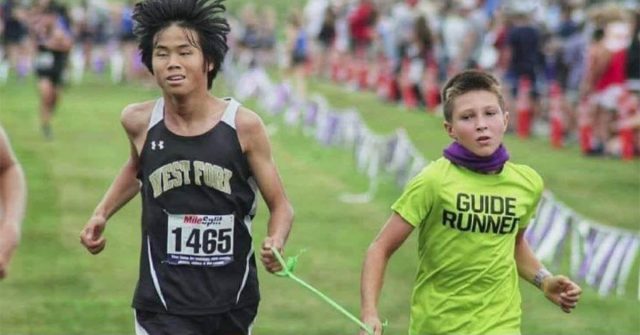 Fourth-grader Rebel Hays trains running cross country every day so that he “doesn’t let Paul down.”

West Fork ninth-grader Paul Scott is blind, but he doesn’t let that stop him from running for his high school’s cross country team.

Rebel runs alongside Paul as a guide runner so that Paul is able to navigate the courses. They both hold on to a rope and are able to complete races together. Rebel trains as much as he can so that he is able to keep up with Paul, who is five years older.

The kind fourth-grader attends Holcomb Elementary School in Fayetteville, Arkansas, and his Mom says that he loves both running and helping others. When he learned that West Fork High School was looking for cross country volunteers, Rebel jumped at the opportunity.

The two runners have a cute relationship, and while Paul is quite inspiring himself as a blind runner, he says that Rebel inspires him.

“He has encouraged me to run faster,” Paul said.

Rebel enjoys running and also that he is helping Paul be able to compete.

“I’ll admit it’s pretty hard, but it’s all for Paul. I have to do it for Paul,” Rebel said.

Watch this video of Rebel and Paul running cross country together:

Once You Hear This Psychiatrist’s Take On Alcohol, You’ll Never Drink Again

Kind Mother And Step-Mother Both Walk Her To School, Making Her Happiness The Priority